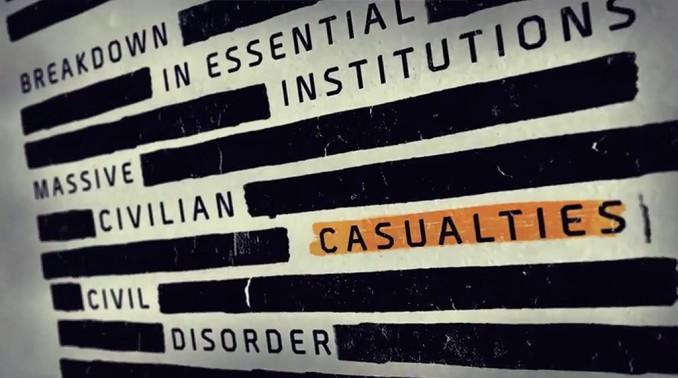 OK, so now you know how they play the game: Politicians lie, the media provides cover for the lie, tyrants usurp authority and impose themselves on your liberty. If you have not seen all of this on both sides of the political aisle during this coronavirus/COVID-19 hoax, then you simply are unwilling to see it… but they’re not done. They’re setting up for round two.

With that in mind, Gary D. Barnett has written an excellent piece at LewRockwell.com on the psyop that we are currently facing titled “The Coronavirus ‘Dark Winter’ PSYOP: Question Everything and Do Not Comply With Any Government Order.”

“If you would be a real seeker of truth, it is necessary that at least once in your life you doubt, as far as possible, all things” ~ René Descartes – Principles of Philosophy

The only real defense that is valid during this exercise in mass tyranny is total refusal to comply with any and all government mandates. We are in the midst of the largest psychological operation (PSYOP) in the history of mankind. By questioning everything concerning this manufactured “virus pandemic,” the resulting attitude cannot leave anything other than extreme doubt, and doubt is what can bring the masses out of the dark and into the light. The newest term being targeted toward the masses is the coming of the “Dark Winter,” which is nothing more than propaganda based lies meant to prepare the sheep for a planned continuation and escalation of this fake pandemic in order to bring about world domination.

Operation Dark Winter was the code name for a senior-level bio-terrorist attack simulation conducted from June 22–23, 2001, which was designed to carry out a mock version of a covert bio-weapon’s attack on the United States. The players involved in this were the Johns Hopkins Center for Civilian Biodefense Strategies (CCBS) and Center for Strategic and International Studies (CSIS), and the project designers were Randy Larsen and Mark DeMier of Analytic Services. It is very interesting that the same Johns Hopkins along with the evil Bill and Melinda Gates Foundation conducted Event 201, a coronavirus “simulation” just this past October, on the verge of this so-called pandemic. The same players, same objectives, but now it is real.

Rick Bright, the former director of the Department of Health and Human Services’ Biomedical Advanced Research and Development Authority, and claimed whistleblower, has been all over the mainstream news as of late projecting the “darkest winter in modern history.” Using this term was no accident, and in fact was meant as propaganda to frighten and alarm the already cowardly and pathetic public. It was also meant to instill a mindset of a killing plague soon to come. This was completely staged in my opinion, but it will nonetheless be accepted by a society steeped in fear due to this “crisis.”

I would expect the term “dark winter” to become a new buzzword, as this new term the second time around, is strictly tied to the original scenario, but applied to today’s panic. None of this is coincidence, none of it is accidental, but it is sinister. If things continue as they have been, and this lockdown remains in place, whether fully or partially, the anticipation of this “dark winter” will be on the minds of most all American sheep, especially if it is continually used as the threat of things to come.

With that in the minds of the people, they will be expecting the worst, and will probably get exactly what they expect; another planned pandemic.

The current government plan, regardless of what is partially opened this summer, is to continue to mandate social distancing and masks as some sort of faux protection against this non-existent threat, to continue to shame those dissenters that refuse to comply with government orders, and to use more force to stop any dissent. In addition, testing as many people as possible with flawed tests will continue, and more demands to test will be forthcoming. While that is happening, the contact tracing of individuals will become more and more evident as tracking technology is advanced and implemented nationwide. All of this is leading to this current crisis stage’s ultimate goal, which is forced mass vaccination. As I wrote a few days ago, “the government has announced that a contract for $138 million has been issued to fund production of 500 million pre-filled Covid-19 vaccine “injection devices,” this before any vaccine is available or tested.” As any should be able to see, this is a complex, but easily identifiable plot that is coming to fruition very quickly and with little resistance. It is planned down to the last detail, just as were all the practice runs that were acted out in the past. I have always thought that bad people will expose what they are up to if only people would listen. Well, this time, they have told the public over and over again what was coming, but few listened.

The “injection devices” are already available, and now Trump is mobilizing the entire military to make war against the American people, by sending armed soldiers into the streets to vaccinate by force everyone in the country. Without mass resistance, this next phase will be successful, and then the following phase of population control would have already been implemented due to the poisoning, sterilizing, and possibly chipping of all those vaccinated. These plans are being accomplished out in the open, and with the consent, implied or not, of the people in this country.

Multiple agendas are being advanced, and the destruction of the economy and the resulting dependence of the population on government are going forward and being accepted. Pending legislation to print more money and dole it out to those out of work is already in process, as $3 trillion will most likely be distributed in small part to appease those not working, but most of that newly printed money will be used to continue the transfer of wealth to the few at the top. As debt, poverty, and bankruptcy continues to decimate the general population, the top of the heap will continue to buy up assets at depressed prices with taxpayer money, so in essence, those now starving are helping to enrich the perpetrators of this fraudulent virus scam.

We are definitely facing a horrible pandemic, but it is not due to any virus. The real pandemic is that the United States government and the enforcers for the controlling ruling class, are waging war on American citizens, and will not relent until the people themselves stop it. This totalitarian takeover will never cease by using the political system, as that corrupt system is why we are in this mess in the first place. A belief in nation instead of self led to nationalistic pride where none was deserved, and has brought complacency, weakness, and dependence on government, and left the people without the will to self rule. The result is obvious, but more than that, it is now fatally dangerous. As I said earlier this year here:

“No vibrant society can exist in a state of obedience. While many great minds have discussed the natural desire of man to obey authority, including Sigmund Freud, this trait in man does not allow the capability to seek or claim freedom. The obedient are bound to a life of rule, as that is their nature.”

Freedom and independence can only be achieved and held by non-obedient, non-conforming individuals. Therefore, we must in order to defeat this criminal government force, become a nation of dissenters by not complying with any government order concerning this government created fake crisis.

These criminals must be called out at every instance and then justice must be handed down to them, regardless of their political status or position.