(Natural News) The determined effort of media pundits and publishers to try to downplay the severity of the coronavirus pandemic will go down in history as one of the most bizarre and inexplicable chapters in the history of journalism. Over the last two months, mostly pro-Trump, conservative publishers have gone to extraordinary lengths to try to claim the coronavirus is no more deadly than the regular flu, even as coronavirus deaths have exceeded regular flu deaths by well over over 2000% on a day-to-day basis for the past two weeks. (See comparison chart below.)

In just the last 17 days, for example, the coronavirus has killed more Americans than died across an entire year of the regular flu.

And by next Tuesday, the coronavirus will have then killed more Americans in just two months than died in the entire Vietnam War which spanned multiple years.

The coronavirus remains the No. 1 cause of death in America on a day-to-day basis, vastly outpacing deaths from cancer, heart disease, Alzheimer’s, obesity, accidents, shootings and all violent crime combined. Nothing is killing more Americans right now, day to day, than the coronavirus. Clearly it isn’t “just the flu.”

They’ve been using the wrong fatality numbers from day one

Now, we have arrived at a moment of clarity that’s truly refreshing. It turns out the naysayers have been using the wrong “fatality rate” number all along.

The Case Fatality Rate (CFR) is the rate of death among those who are symptomatic and diagnosed as “sickened” by the infection. It does not include people who merely have antibodies but who show no symptoms.

The Infection Fatality Rate (IFR), on the other hand, is the rate of death among all who have been infected, including those who are asymptomatic (and therefore show no symptoms).

Through that deceit, the naysayers then claim absurd things like pretending the coronavirus death rate is about the same as the regular flu death rate. From there, they demand all lockdowns must be immediately ended, saying there’s really no danger to society and “we don’t lock down the country for the flu.”

But if that were true, we wouldn’t be seeing thousands of people dying from it every day in America. We would only see fewer than 100, which is roughly the number of deaths caused by the regular flu each day (actually it’s 94, on average).

Based on concluded cases so far, the coronavirus Case Fatality Rate right now is 32% in the USA

This helps explain why coronavirus deaths are right now over 20 times higher than the flu, on a day-to-day basis. The regular flu kills about 94 people per day in America, on average, while the coronavirus has been killing anything from 1,800 to 2,800 people per day for the last two weeks. That number should begin to fall next week because the lockdowns are working.

We’re now at over 52,000 deaths in the USA from the coronavirus, and it continues to climb by around 2,000 deaths per day. In another 2-3 weeks, we’ll likely be close to 70,000 deaths, which is twice the number of fatalities from the regular flu during the last flu season (about 34,000).

Based on cases which have been concluded in the USA so far, the coronavirus currently has a 32% Case Fatality Rate (CFR) in the United States. You can confirm this via Worldometers.info, which uses hundreds of sources including state health department data and the CDC: 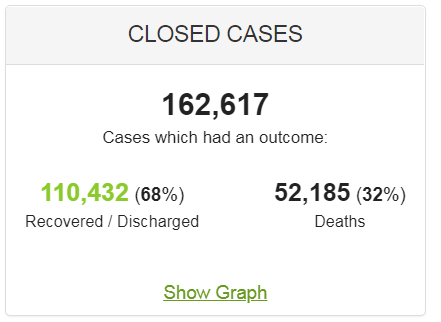 That same tracking site shows there are currently 925,000 confirmed infections in the United States, but most of those are asymptomatic and only diagnosed by PCR lab tests. Even if you were to assume every one of them was symptomatic, the number of dead in the USA is already over 52,000.

Why does any of this matter?

Why am I fighting so diligently to correct the bad math of other publishers, authors and talking heads who are all getting it wrong?

Because if lockdowns are ended based on bad math, the results will be catastrophic.

If mayors and governors — mostly Republicans, by the way — prematurely end the lockdowns after being convinced the coronavirus is “no worse than the flu,” they will be making a tragic, horrible mistake that will lead to two things:

1) New exponential explosions in infections, hospitalizations and deaths.
2) A new round of lockdowns that will further devastate jobs and the economy.

That’s why it’s crucial to use good numbers and good math to arrive at the correct answers. Right now, almost no one is using the right numbers. They are mostly grasping at whatever numbers they think “proves” the coronavirus is no big deal. And as a result, they are pressuring political leaders to open the gates and send innocent people surging back into a bioweapons pandemic scenario that will lead to absolutely devastating results.

A deadly combination: The very same people demanding the lockdowns be ended are also the ones using the wrong numbers

It’s probably no surprise that the very people demanding all lockdowns be ended — without mask mandates — are the very same ones who are using the wrong numbers and reaching the wrong conclusions about the severity of the coronavirus.

They are pressuring governors and President Trump to end all lockdowns immediately, and they refuse to wear masks. Many of them claim the coronavirus is a hoax that doesn’t exist and isn’t killing anyone. Essentially, a very large portion of the conservative media has now become the “Flat Earth” equivalent in the realm of infectious disease.

This is a critical time to listen to the people who understand the math. Honestly, that’s people like myself, Michael Savage, Chris Martensen from PeakProsperity.com and others who are well educated in microbiology, epidemiology or other similar sciences. (I run a top food science laboratory that’s ISO accredited and conducts mass spec testing and microbiology testing for food contaminants.)

I’ve also interviewed Dr. Shiva, who is a very intelligent man that’s calling for ending the lockdowns but only with a strong emphasis on boosting immune function across the population using nutrition. I absolutely agree with that assessment, as long as we add masks to the equation, and I’ve publicly described a simple way that we can intelligently end the lockdowns and protect public health.

But none of the conservative media voices demanding an ending of the lockdowns are promoting masks or nutrition. They just want to pretend the coronavirus is no big deal and open the floodgates with no precautions or protections.

It will end badly. Mark my words.

I’m the one who told you in February that this would explode across the USA, when no one believed it. I’m the guy who publicly released a detailed pandemic projection model in early March that accurately foresaw thousands of deaths in April (although my numbers turned out to be low).

Take it to the bank when I warn you that any effort to prematurely end the lockdowns without adequate precautions for the people (both in terms of masks and nutrition) will spark a whole new cycle of exponential spread, hospitalizations and deaths, ultimately leading to renewed lockdowns and economic devastation.

I’ve done the math, and the math is right. It’s as clear as day. If America goes down the path of carelessness, throwing caution to the wind, the first 6-8 weeks will look really good, followed by alarming explosions in new cases that will lead us all right back to the same scenario we’re enduring right now.

And this is exactly what the vaccine industry wants: Keep everybody sick and locked down, over and over again, with infections bouncing around the population and a never-ending sense of doom so that vaccines can be positioned as the savior of humanity.

In other words, the naysayers are playing right into the hands of Bill Gates and the vaccine industry. They want people to become complacent. They want a new round of infections to explode in the late summer. They want new lockdowns in the Fall. They want people to panic yet again, and lose their jobs a second time, and then beg for a vaccine to end the madness.

Yet I currently see zero evidence that many of the players across conservative and independent media have any interest whatsoever in taking an honest look at the CFR vs. IFR issue. Most of them just want to downplay the virus for their own political reasons, calling the lockdowns a “hoax.” It is these people who will end up getting many more people killed and economically destroyed in the end. It is these people who will cause Trump to be destroyed and see the White House handed over to the Democrats, who will use their power in 2021 to dramatically raise taxes, ban firearms, pass vaccine mandates and probably confiscate gold, too, while they’re at it.

The pandemic deniers, in other words, are delivering us all into absolute tyranny and collapse.

Damn them all for their dangerous ignorance. When the second death wave emerges, and the second round of lockdowns commences, and the stock market crashes even more, it will be too late for these people to say they’re sorry. They are the Pied Pipers leading their readers right into the jaws of global tyranny and a medical police state, and they are so ignorant of what’s happening right now that they can’t even see we are in a biological weapons war with China, and the coronavirus is a weapon that’s very real and very deadly.

Of all the collapse and survival scenarios I’ve researched and trained for over the last twenty years, never in my wildest dreams did I ever imagine that we would find ourselves in a deadly, biological weapons pandemic while half the population pretended it didn’t exist.

Our greatest enemy in all this, it turns out, is denialism.

THE GOVERNMENT IS FINALLY BECOMING AFRAID OF THE PEOPLE

France: Health Caregivers Burn Their Diplomas In Protest Against Compulsory “Vaccinations” – They Are Not Alone! (Video)

Half Of US Calls For Opposition To “Vaccine” Mandates On September 18 – Here’s How To Join
September 18th, 2021 Sons of Liberty Media