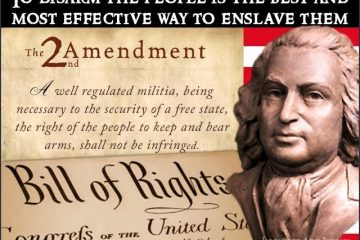 “How many times I have broadcasted on air that you either deal lawfully with corrupt anti-gunner politicians for violating our Bill of Rights (Article 2, Section 4, US Constitution), or you will be disarmed. There is no in-between. If Americans do not want to learn from history, then Americans will learn from experience in the present only to have wished that they had learned from history.” -Bradlee Dean

Let me say that again, they had to first disarm them of their means to defend themselves against their oppressors to have absolute control.

“So it came to pass in the day of battle, that there was neither sword nor spear found in the hand of any of the people that were with Saul and Jonathan:” -1 Samuel 13:22

And so it is the reason why our forefathers established the Second Amendment of the Bill of Rights because they understood this basic elementary principle.

George Mason, the Father of the Bill of Rights, warned:

“To disarm the people…was the best & most effectual way to enslave them.”

Americans must understand what is happening today.

Administration after administration has incrementally and systematically stripped the people of their right to bear armswith one excuse after another, if not through propaganda, then resort to brainwashing if need be.

James Madison, the Father of the Constitution said:

“I believe there are more instances of the abridgment of freedom of the people by gradual encroachments by those in power than by violent and sudden usurpations.”

Today, we see it is in a full-frontal attack by this current administration that is right in front of our faces to further strip law-abiding gun owners of their right to bear arms through something called “red flag laws,” which are not law! (Luke 11:21-22).

One must ask where these said representatives are deriving their delegated authority from in order to strip Americans of their right to bear arms? They aren’t getting it from the American people who employ them nor from any founding document. This is, in fact, foreign and subversive to American government.

Why is this government arming The IRS, DHS, VHA, OIG, SSA, NPS?

These red flag laws are nothing more than the government declaring whomever they will, and at will, a threat at their own interpretation, as well as their perverted discretion (Isaiah 5:20).

“Do not separate from historical background. If you do, you will have perverted and subverted the Constitution, which can only end in a distorted, bastardized form of illegitimate government. “ –James Madison the 4th President of the United States

In other words, it will make it easier for those who are perverting and subverting the Constitution to weed out their political opposition. Think that may be stretching things a bit? Look to the history of Adolph Hitler, Joseph Stalin, BenitoMussolini, Mao Tse-tung, Pol Pot etc…

Think of this: today, in America, when a crime is committed, the law abider is blamed for the crimes of the lawbreaker by those who are to uphold the enumerated laws (Revelation 12:10). This goes far beyond innocent until proven guilty.

These subversives are not so much worried about lawbreakers such as themselves as they are worried about the law abiders because they will be the ones to resist if it becomes necessary. After all, this is whom they are attacking.

Remember that those who are disarming you are those who promised to uphold the law, not tear it down, which makes them outlaws and they must lawfully be removed from office (Article 2, Section 4, US Constitution). If not, you will be disarmed (Luke 21:22).

Remember, friends, the US Constitution is the law of the land and not party affiliations.

“The Supremacy Clause of the Constitution of the United States (Article VI, Clause 2), establishes that the Constitution, federal laws made pursuant to it, and treaties made under its authority, constitute the “supreme law of the land.” -Article 6, Section 2, US Constitution)

“A well regulated Militia, being necessary to the security of a free State, the right of the people to keep and bear Arms, shall not be infringed.” -2nd Amendment of the Bill of Rights

With the two of them brought together, Samuel Adams stated:

“The Constitution shall never be construed… to prevent the people of the United States who are peaceable citizens from keeping their own arms.”

What our forefathers bestowed upon us, their posterity, was that we all learn from their experience and wisdom in addressing tyranny in their time so that we can allow the lessons to avail in our times if need be (Proverbs 15:32).

If you look to the Declaration of Independence alone, you will find that document was our forefathers’ instruction manualin throwing off a tyrant that would not be ruled by God in keeping the people free under God (2 Corinthians 3:17).

How important were firearms in throwing off tyranny, simply look to the lessons that our first president George Washington had taught:

“Firearms are second only to the Constitution in importance; they are the people’s liberty teeth.”

This is why Americans are armed. Lesson learned.

Alexander Hamilton stated the reason for the Second Amendment: “The best we can hope for concerning the people at large is that they be properly armed,” adding later, “If the representatives of the people betray their constituents, there is then no recourse left but in the exertion of that original right of self-defense which is paramount to all positive forms of government.”

By the way, Hamilton is referring to what institution when he says “the representatives of the people”?

Americans will either become the strength of the Constitution, or they will find themselves under the power and control of their oppressors just like that of the children of Israel!

Article posted with permission from Sons Of Liberty Media. Article by Bradlee Dean.