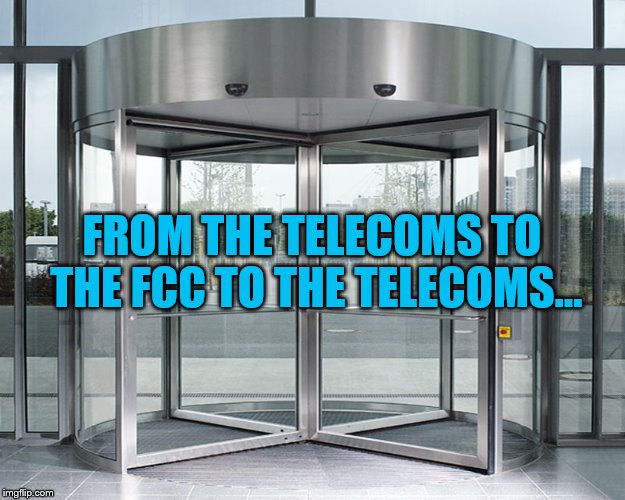 The Federal Communications Commission (FCC) is supposed to protect the public by regulating the Telecom Industry. Experts say they’ve done a lousy of job of this for a while now. Employees tend to go back and forth between working for the Telecoms and the FCC which is a big part of the problem.

It’s no surprise that the agency is currently being investigated for collusion with the Telecom Industry in regard to very unpopular federal 5G technology legislation that was passed in September.

This federal legislation eliminated local control and environmental review of harmful small cell technology installation. The Telecom Industry won’t testify that 5G is safe. In fact, no one will say it’s safe – except apparently FCC employees:

How’s that for loyalty!

Thanks to Scientists 4 Wired Tech for alerting us to an article about recently departed commissioner, Mignon Clyburn, and her new job lobbying for T-Mobile.

Revolving door regulators in the telecom sector are certainly nothing new.

Of course, former FCC chairman, Tom Wheeler, has always been in a league of his own:

Thomas Wheeler has been influencing communications policy in Washington for a long time, but always from the sidelines. He ran what was then the National Cable Television Association and then the Cellular Telephone Industry Association until he was driven out in House Majority Leader Tom De Lay’s purge of Democrats at trade associations. He was a top advisor for Vice President Al Gore and a key member of President Obama’s 2008 transition team. Now he is about to move to center stage as Obama’s pick to head the Federal Communications Commission.

It’s no wonder “Big Tech”/“Big Wireless” continues to be compared to “Big Tobacco” and “Big Oil.”