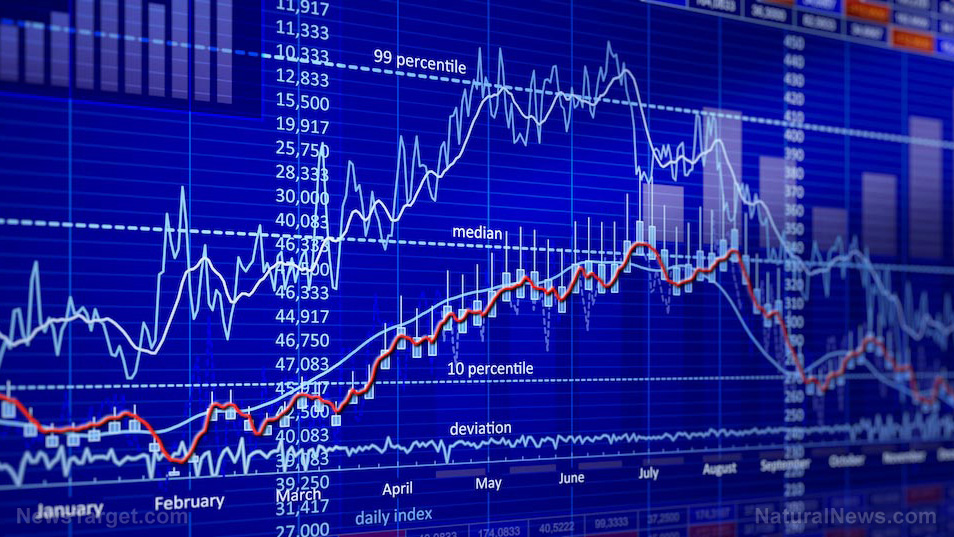 (Natural News) The stock market is a rigged game, of course, and current stock prices don’t even reflect real corporate earnings. Instead, they most closely echo the rise and fall of quantitative easing, a form of artificial money creation by the Federal Reserve.

Barack Obama’s economic policies were disastrous, but he still managed to preside over a rising stock market thanks to the money creation policies of the Fed.

In fact, the Fed’s own charts reveal exactly how this works and what they’re trying to achieve.

Go to this link at FederalReserve.gov (which is a misnomer, since the Fed is a private corporation and not part of the government):

The link is called “Recent balance sheet trends” and shows you the Fed’s balance sheet, in trillions of dollars, from July, 2007 through December, 2019.

Follow the chart points below to understand exactly what the Fed is doing: 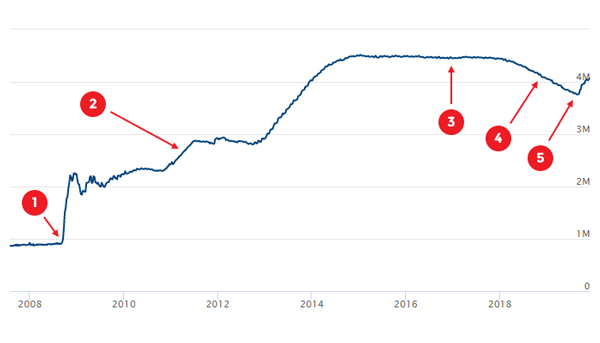 #1) Obama is inaugurated, so the Fed explodes the money supply and creates over a trillion in new assets for itself while it’s pumping money into the economy to try to make Obama look like an economic genius.

#3) Donald J. Trump is sworn in as president. Immediately, the Fed initiates its plan to crash the economy under Trump.

#4) Beginning in early 2018, the Fed begins contracting its balance sheet, destroying the “wealth effect” it had created under Obama, as a way to harm the economy under Trump.

#5) In September of 2019, the Fed reverses course and decides to return to pumping artificial money into the economy.

Look more closely at the following chart, which is zoomed in to the last 6 months:

#6) This is the inflection point where the Fed decides to start pumping money into the system to support Trump’s re-election. A Trump victory is virtually assured as long as the stock market doesn’t crash.

This indicates Trump likely made a deal with the Fed to keep pumping up the false earnings of an over-hyped stock market so that the banksters and financial elite could continue to skim their profits off the money supply.

The Fed, it appears, is now locked in with Trump, and that means Trump is almost certain to win re-election in 2020 if he’s not removed from power first (or assassinated by the deep state).

Note: This does not mean the Fed will be successful in its mission. There are strong warning signs that the market bubble may be entirely unsustainable, no matter what the Fed does with interest rates, quantitative easing and “repo” operations.

Make of this what you want, but have no illusions about the fakery of the stock market and the nefarious manipulations of the Fed, which answers to no one, not even Congress.

Lastly, we are of course in an irrational market bubble that will one day suffer a catastrophic correction, wiping out trillions in fictional “assets” that investors currently think are real. It looks like the Fed is trying to make sure that day of reckoning does not occur until after the 2020 election. If they can prop up the system for that long, it points to an early 2021 market crash.

It seems highly unlikely that the markets can continue to be propped up all the way through Trump’s second term, which means Trump will be blamed for the most severe market crash in history.

Alternately, if a Democrat manages to win in 2020 — let’s say Elizabeth Warren — that Democrat will likely take the blame for the catastrophic crash that was actually inherited from the Obama era money printing of the Federal Reserve.

Whatever you believe, do not suffer under the illusion that the stock market is a fair representation of actual corporate earnings and growth potential. For the most part, the markets simply reflect money creation by the Fed. The fundamentals are long forgotten, which means most investors in America today are living in the era of sheer delusion, having no clue of the events that will sooner or later wipe their “assets” from the books and recalibrate stock prices to reflect the reality of corporate earnings (without endless easy money from the Fed).