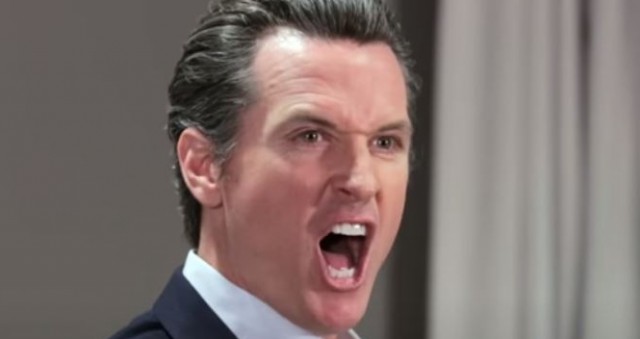 “Democrats have seized on the coronavirus pandemic to push their long-sought partisan election agenda, and Governor Newsom’s executive order to send absentee ballots to inactive voters without necessary ballot safeguards is an illegal and brazen power grab ahead of November’s elections.”

“Democrats continue to use this pandemic as a ploy to implement their partisan election agenda, and Governor Newsom’s executive order is the latest direct assault on the integrity of our elections. Newsom’s illegal power grab is a recipe for disaster that would destroy the confidence Californians deserve to have in the security of their vote.” – RNC Chairwoman Ronna McDaniel.

“California’s election system is already burdened with serious issues. The disastrous Motor Voter program arbitrarily changed voter registration for thousands casting doubt on the integrity and accuracy of our voter rolls. Using this pandemic in a unilateral power grab to change our election laws with an executive order will further put the integrity of our elections into question. The California Republican Party will fight back at every step to ensure a secure election, as Californians rightfully expect and deserve.” – CAGOP Chairwoman Jessica Millan Patterson

“Democrats continue to try and use every trick in the book to unfairly tilt the election in their favor. The NRCC is proud to partner with the RNC and the California GOP to stop Democrats’ unconstitutional efforts to rob Californians of their voting rights.” – NRCC Chairman Tom Emmer

Newsom’s executive order violates eligible citizens’ right to vote. By ordering mail-in ballots be automatically sent to inactive voters, Newsom has created a recipe for disaster. This order will result in ballots going to voters with invalid registrations, voters who have moved, and voters who have passed away. The problem with sending ballots to inactive voters is that many states do not clean up their voter registration lists unless forced to.

Los Angeles County, for example, had to remove up to 1.5 million ineligible voters due to a court settlement last year after its rolls showed registration of 112 percent. In other words, there were more registered voters than adults living in the county.

Newsom’s executive order creates an opportunity for fraud. No state that conducts all-mail elections automatically mails ballots to inactive voters because it invites fraud, coercion, theft, and otherwise illegitimate voting. Even in Washington, which has successfully implemented a vote-by-mail system, the Secretary of State has said:

“…you can’t just flip a switch and go from real low absentee ballots to 100 percent vote-by-mail. I mean, as we sit here right now, in April, with a November election deadline, I’m not sure you could do it in states across the country.”

“I don’t think it’s a realistic goal to think that you could get 50 states to all be vote-by-mail by even the November election just because the states are in such wildly different places.”

California Democrats’ weaponization of ballot harvesting has led to a lack of safeguards and delays in counting ballots. House Republicans recently released a report on the political weaponization of ballot harvesting in California – where the practice of strangers going door-to-door to collect ballots is commonplace, with no supervision. The report emphasizes the lack of safeguards on ballot harvesting: there is no way to track who drops off ballots to polling locations, no way to track the quantity of ballots that are dropped off at once, and no way to determine the chain of custody of ballots – opening the door to fraud and inaccurate ballot counts. In 2018, ballot harvesting had a major impact on the midterm elections in California, when seven Republican candidates were leading on election night, but lost weeks later because of the delay in counting mail ballots – many of which were harvested.