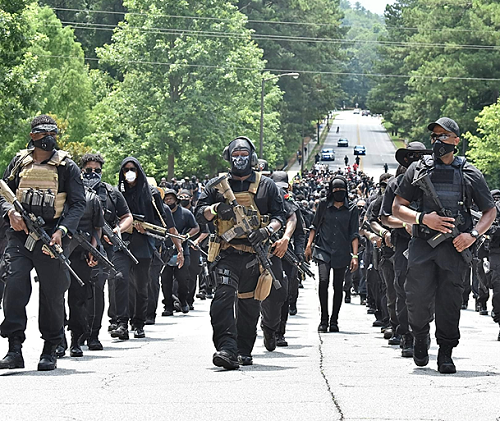 Isn’t it odd that the political left claims to be so adamantly opposed to racism, yet they are the first people in the room to make generalizations based on race? Maybe it’s not so odd, at least when you consider the history of social justice movements and the people who fund them. There is power to be had in creating a “race war” narrative, and the chaos surrounding such a conflict could be easily exploited. By making everything about race, the political left is perhaps unwittingly serving the interests of the very wealthy elites they claim to despise.

As I predicted in my article ‘Order Out Of Chaos: The Defeat Of The Left Comes With A Cost’ back in 2016:

“When I mentioned in my last article the crippling of social justice, I did not mention that this could have some negative reverberations. With Trump and conservatives taking near-total power after the Left had assumed they would never lose again, their reaction has been to transform. They are stepping away from the normal activities and mindset of cultural Marxism and evolving into full blown communists. Instead of admitting that their ideology is a failure in every respect, they are doubling down.

When this evolution is complete, the Left WILL resort to direct violent action on a larger scale, and they will do so with a clear conscience because, in their minds, they are fighting fascism. Ironically, it will be this behavior by leftists that may actually push conservatives towards a fascist model. Conservatives might decide to fight crazy with more crazy.”

This evolution of the political left is not natural or “grassroots”; it is completely engineered. This past week a group of well armed BLM protesters called the “NFAC” (Not F#&*ing Around Coalition) marched near Atlanta on July 4th demanding the destruction of a confederate monument and trying to goad “white militias” into facing off with them. I don’t view this group as a legitimate threat, only a sign of things to come. They do appear to be organized well enough and seem to have come out of nowhere, so much so that I’m rather suspicious.

First, I would point that the media is perfectly on board with the NFAC and similar groups, calling them “peaceful protesters”. Yet, when conservative militias hold armed demonstrations, the media viciously attacks and accuses the right-wing of inciting violence. When BLM protested the death of George Floyd, the media called it stunning and brave. When conservatives protested the Covid lockdowns in Michigan that were destroying the economy, the media attacked them for “spreading the virus”.

When BLM and Antifa announced they would be busing activists into rural towns, residents organized an armed security response. The protesters remained peaceful, and in some cases decided not to show up. The armed citizens were of course demonized and accused of paranoia over a threat that “did not exist”.

The convenient thing about extreme left groups is that they have no principles or rules to follow. Meaning, they operate on lies and manipulation. They do not care about being right, they only care about winning. When Antifa fails, or they get caught in the middle of something nefarious, they simply claim they are not a group but an idea, therefore they aren’t culpable for the actions of a “handful of bad apples”. When the BLM or Antifa wimp out and don’t show up to a rural town to protest because they might have to face organized opposition, the media claims that the groups had no plans to protest in those towns anyway.

It is clear who the establishment supports. BLM and Antifa groups have received millions in donations from corporate sponsors over the past few years. In fact, BLM was initially funded by organizations like George Soros’ Open Society Foundation as well as the Ford Foundation.

I believe the NFAC, represents new trial run in the engineered conflict within America. When compared to groups like the John Brown Gun Club or the “Trigger Warning Gun Club”, which ended up becoming a hilarious joke to most of the country, the NFAC is far more tailored and puts on a much better show. These people are being groomed as bogeymen for conservatives.

The NFAC’s choice to protest near a confederate monument, as well as calling out “white militias” to fight them, is obvious race baiting for political gain. I have been around militia groups for the better part of a decade, and I can say with some authority that most of them are not “all white”. Liberty groups are made up of people that are willing to defend freedom; that’s it. There is no skin color requirement. In the NFAC videos I can make out one white guy among them (maybe their handler). Perhaps this black progressive militia should attempt to be more inclusive and a little less racist?

The media’s soft glove treatment of the NFAC reminds me of the conflict in Syria in 2013. Remember when the mainstream media originally tried to present ISIS insurgents funded and trained by western interests as clean-cut and wholesome freedom fighters standing against the “oppressive Assad regime”? Yeah, that’s what this feels like.

At bottom, it’s not the leftist mobs that present the biggest threat; these groups are ultimately a paper tiger. Instead, the greater danger comes from groups that are directly trained and organized by elitist or government interests. These are the groups that end up being used to trigger attacks, like shootings, bombings, assassinations, etc. And, it’s not the first time in US history this has been done.

In my article ‘Militant Leftists Are More An Annoyance Than A Real Threat To Liberty’ I outlined how such groups tend to mutate into something more dangerous once they start receiving funding or illicit training from establishment interests. As I noted in 2017:

“Government and elitist-supported groups, supplied with training and funding, are a greater danger. They tend to operate more like terrorist cells, using bombings, shootings and attrition.

This is not always simply to instill fear or to achieve an actual political aim in support of leftist “values.” Instead, these groups are sometimes injected into the system as a way to inspire conservatives to overreact or to run into the welcoming arms of a waiting dictatorship.

Perhaps the most effective example of the creation and exploitation of violent leftist terror was Operation Gladio, a false flag program running from the 1950s to the 1990s in Europe until it was finally exposed by Italian Prime Minister Giulio Andreotti. Many of the leftist and “communist” cells involved in the numerous attacks on civilians during this period were in fact either manipulated by government agencies like the CIA, or they were created from scratch by those same agencies.”

The method of using racial tensions as a driver for domestic conflict is also not new. As I mentioned in the same article:

“I would also suggest research into more famous and violent leftist activist groups like the Weather Underground; a collective responsible for dozens of bombings and threats against government facilities. Perhaps the most suspicious circumstance of the Weathermen and their seeming immunity in many cases to prosecution is the strange story of Bill Ayers, a leader within the Weather Underground that planned multiple bombings but remains free to this day and is an influential figure among political elites in Washington.

If you think that the racially charged rhetoric of social justice warriors today is extreme or “new,” just look at the rhetoric of the Weather Underground, which included discussions on “killing all white babies” because they were destined to “grow up to be oppressive racists.” This propaganda has been going on a LONG time.”

I suggest that we are on a fast path to hard leftist militancy, and that this is being created by special interest groups as a catalyst for war. If the establishment can make the fight about race, then they gain an aggressive advantage over the narrative. Conservatives must continue to assert a non-race based position, and not be lured into allowing the political left and the media to dictate the terms of the fight. Atlanta is just the beginning.

This battle is not about race, it is not about white vs. black or so called “marginalized” groups against the patriarchy, it’s about collectivism vs. liberty. It’s about socialism and communism vs. voluntarism and free choice. When I look at groups like BLM or the NFAC, I don’t see black people, I see useful idiots being exploited by elitist interests. I see Marxist pawns. The gatekeepers want to make it about race so that the real reasons for the conflict are obscured. We cannot allow this, and we must avoid the trap.

With global tensions spiking, thousands of Americans are moving their IRA or 401(k) into an IRA backed by physical gold. Now, thanks to a little-known IRS Tax Law, you can too. Learn how with a free info kit on gold from Birch Gold Group. It reveals how physical precious metals can protect your savings, and how to open a Gold IRA. Click here to get your free Info Kit on Gold.