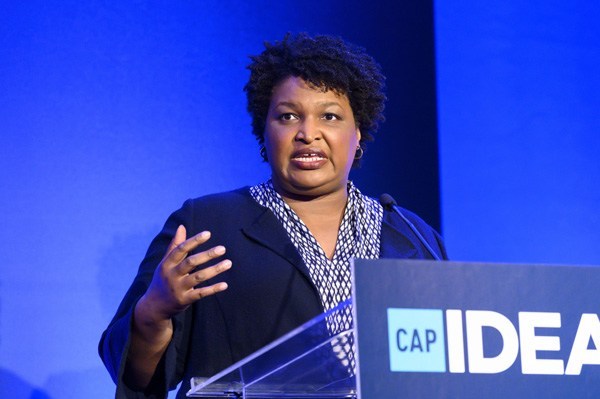 Stacey Abrams enjoys a promising career for someone who lost her last election. She refused to admit defeat, yet is rarely accused of undermining “our democracy.” Many people want her to run for president or be vice-president.

Why? She has no ideas to speak of. Her politics are crude. Yet she understands that a multicultural, multiracial democracy is a demographic head count. She wants State Conquest, that is, for the state to serve the interests not of the founding people but of a different people. She wants to destroy the symbols of white America, such as Stone Mountain, and replace them with those of her own people. She’s a herald of the Great Replacement in Georgia.

In her own words:

Georgia’s electorate is growing fast and changing rapidly. We need a strategy with big, early investments to take advantage of Georgia’s strengths by expanding the electorate, particularly with voters of color. pic.twitter.com/hGhwR259d9

Democrats are in a position in 2020 to replicate and expand upon what my campaign accomplished in 2018. In fact, we are better positioned now. The trends are unmistakable and, with full investment and the right strategy, victory is within our reach. Now, let’s get it done. pic.twitter.com/zslAZDxbOB

The “Abrams Plan” touts Georgia’s “demographic advantages that don’t exist in other states,” namely its large, young black population. Her plan calls for registering hundreds of thousands of black and “Latinx” voters. It also expects some support from college-educated white voters.

“In Georgia, as in other states, race is often the strongest predictor of political leanings,” the plan notes. This is true.

The plan also calls for mobilizing black voters in major cities. It calls swing voters a “narrow slice” of a “predominantly white” part of the electorate who are less of a priority.

Though the plan argues Democrats can make “marginal gains among white voters,” its overall message is simple. Spend big, turn out unregistered blacks and Hispanics, and overwhelm conservative whites.

Miss Abrams understands that politics is identity politics. Republicans don’t—and that’s why the supposedly conservative South from Texas to Georgia is about to turn blue.

Michelle Goldberg, another leftist who understands demographics are destiny, asked recently, “Dare we dream of the end of the GOP?” “The Republican Party is doomed,” declared Stanley Greenberg in the New York Times. California shows the future. When leftists tell us that they want to replace us, believe them.

Republicans can’t say they weren’t warned. Peter Brimelow, Sam Francis and others predicted this decades ago. I suspect they were purged from Conservative Inc. because many knew they were right.

“Movement conservatives” will reap the consequences of their cowardice. The census predicts election results.

The Great Replacement isn’t a conspiracy theory—it’s an obvious fact. Barring radical demographic change, conservatism will be finished soon. Our job is to build something new out of the ashes of this failed movement.

Mr. Hood is a staff writer for American Renaissance. He has been active in conservative groups in the US.