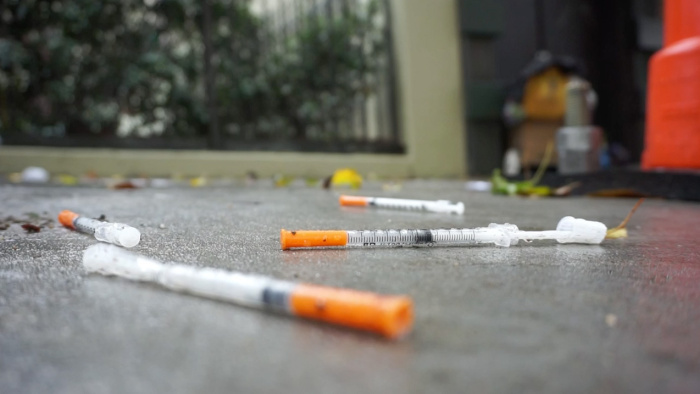 Much of the rest of America looks at the West Coast in awe. What is wrong with these people? Where do they get their lunatic ideas from? There are certainly more than just a handful of people in America who might secretly celebrate if the entire West Coast fell into the sea, and it just might.

Slowly but surely the West Coast is becoming the worlds toilet. Major cities in every single West Coast state are becoming awash with homeless people whose brain functions are at best questionable. As these kinds of people congregate to “homeless friendly” coastal states they bring with them the kind of devastating filth that can destroy any city regardless of wealth. Used needles and the stench of human waste do not encourage conventions or tourists to linger long or return to the land of the Port-O-Potty (actually these people poo in the street not in a Pot-O-Potty but it sounded kewl in my head).

This glaring example displays on a small scale what happens when you invite questionable people to come live with you in your city, state or nation. Eventually (and generally in a relatively short period of time) these questionable people take over as taxes are raised to support them, and taxpayers who can escape the taxes and stench do so. It is a recipe for the murdering of a city.

But foul odors and messy streets are just the tip of the iceberg. Many if not the majority of these homeless are drug addicts and have serious mental issues. This mixture of mental health issues and drug addiction makes these homeless people volatile and dangerous. How does the West Coast deal with this? By making it easier for the homeless to be drug addicts of course. People shoot up right in the middle of the street yet very few ever go to jail. Well I guess if it is ok to drop a loaf in the middle of the sidewalk, shooting yourself up full of what passes for drugs on the streets is just okie dokie.

Let’s make something clear about “drugs”. Smoking weed and shooting up heroine or smoking crack or crank are very different things. It is just ridicules to lump all of those things together and you can bet the alcohol and tobacco industries as well as the for profit police departments all want to lump reefer in with these very hard and dangerous drugs to help line their own pockets but that is a bold faced lie. I wish more people on the West Coast smoked weed maybe they’d wake up. No this is about very addictive and dangerous drugs West Coast states promote like a pedophile handing out condoms to elementary school children.

You wonder why the police are told to stand down? Try dealing with someone on meth. They think they are invincible and sometimes they are. Or any other mixture of the kind of toxins you have to shoot into your body to get high on. Miss coke yet? Cocaine is a bit too mild a drug these days. I watched a video these guys made from Portland and they stated inequitably that “everyone’s high” just not quite as high as the proposed taxes to support the stoners. You can’t blame the stoners for fighting to keep that nightmare going and as they consume more of the city their political voice becomes the most heard as the producers make their escape.

The worst part about this entire situation is that the mostly White people who voted for this behavior on the part of their government are making their escape from these former great cities their idiotic ideas are destroying, are bringing these same moronic ideas to innocent cities in middle America.

These are the Dark Ages of America. A plague, the likes of the which mankind has never seen before (probably) that threatens to consume the entire nation. It is a plague born from the notion of creating heaven on earth without the wisdom to know that it is impossible and that the attempt is most likely to get the attention of the other side.

We’re being consumed by a plague of junkies and no one is saying “Just say NO!.”

Reprinted from The McCarthy Chronicles