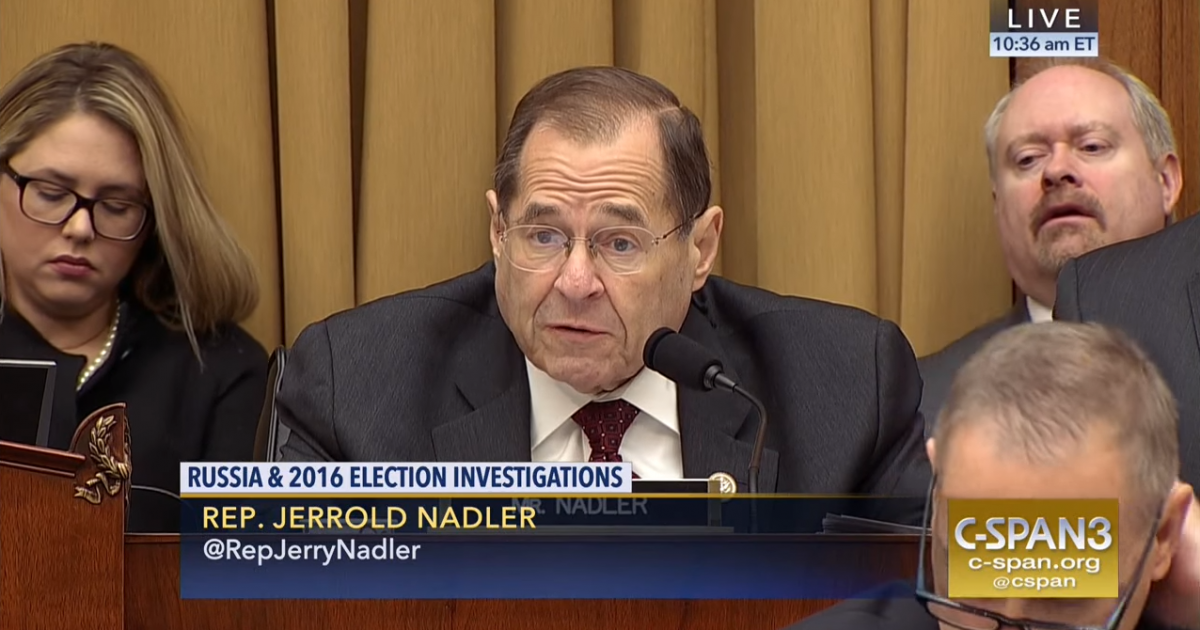 On Friday, Jerrold Nadler, Google’s bought-and-paid-for Democrat representative from New York, issued a subpoena for the entire unredacted version of Robert Mueller’s report. He also demanded the Justice Department hand over all of the underlying grand jury evidence and testimony, even though the information can’t be shared outside the Justice Department by law.

“My committee needs and is entitled to the full version of the report and the underlying evidence consistent with past practice,” the New York Democrat said in a statement. “Even the redacted version of the report outlines serious instances of wrongdoing by President Trump and some of his closest associates. It now falls to Congress to determine the full scope of that alleged misconduct and to decide what steps we must take going forward.”

Translation: To HELL with the law!

But, Rep. Doug Collins, R-Georgia, said Nadler’s demand is illegal, saying the information, “by law, can’t be shared outside the Justice Department.”

“[The subpoena] commands the department to provide Congress with millions of records that would be plainly against the law to share because the vast majority of these documents came as a result of nearly 2,800 subpoenas from a grand jury that is still ongoing,” Collins said in a statement, Politico reported.

But Nadler told “Good Morning America” earlier Friday that it was imperative his committee see the full report to make “informed decisions” about whether to pursue impeachment against Trump, though he said “we’re not there now.”

Nadler is one of a select group of congressional leaders who will be allowed to view a less redacted version of the report, though that version will still not include grand jury evidence. The Justice Department will allow those lawmakers to view the less redacted report in a secure setting beginning next week.

Nadler has also demanded hearings with Attorney General Barr, accusing him of lying.

“Because Barr misled the country, we have to hear from Barr, which we will on May 2. We have to hear from Mueller and ask him a lot of questions,” he said on Friday. “We have to hold hearings and hear from other people both on the question of obstruction of justice, whereas I said the special prosecutor invited Congress to look into that, not the attorney general. We have to look into all that. We need the entire report, unredacted, and the underlying documents in order to make informed decisions.”

And the witch hunt continues…