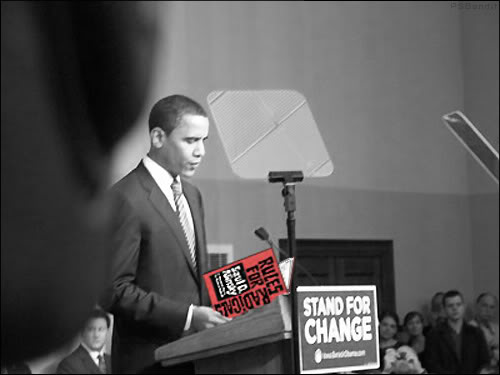 From the archives: Last published September 10, 2014. We attempt to restore what we can in archived reprints, but broken links and missing images are very common.

Barack Obama began his political career by being a “community organizer” in Chicago. After that, his political rise was dizzying — from the Illinois state legislature to the U.S. Senate, and then to the White House.

Saul Alinsky (1909-1972), the son of Russian Jewish immigrants, wrote the book on community organizing and, as such, is the guru of all “community organizers” — a deceptively innocuous term for what Marxists used to call “agitprop” or agitators-propagandists. Alinsky was not the first to realize that successful Marxist revolutions depend on organizational prowess, but he was the first to write a “how to” organizational manual for aspiring Marxist revolutionaries in the United States — the now famous Rules for Radicals: A Pragmatic Primer for Realistic Radicals (1971).

Alinsky’s ideas have been used by the Left in inner cities and college campuses. Hillary Clinton’s senior thesis at Wellesley College was on Alinsky. So influential is Alinsky that Time magazine once wrote that “American democracy is being altered by Alinsky’s ideas.” Even conservative author William F. Buckley said Alinsky was “very close to being an organizational genius.” Alinsky biographer Sanford Horwitt claims that not only did Obama follow Alinsky’s teachings as a Chicago-based community organizer, Obama’s 2008 presidential campaign was influenced by those teachings. Alinsky’s rules are also wielded by Internet trolls. Conservatives, therefore, should thoroughly acquaint ourselves with those rules, so that we can quickly recognize an Alinskyite, identify the tactic s/he is using against us and, even better, use those tactics against them. Here’s a brief summary of the rules (h/t The Union News):

Alinsky’s 13 Rules for the Left:

1. Power is not only what you have but what the enemy thinks you have.

2. Never go outside the experience of your people.

3. Whenever possible, go outside of the experience of the enemy.

4. Make the enemy live up to their own book of rules.

5. Ridicule is man’s most potent weapon.

6. A good tactic is one that your people enjoy.

7. A tactic that drags on too long becomes a drag.

8. Keep the pressure on with different tactics and actions, and utilize all events of the period for your purpose.

9. The threat is usually more terrifying than the thing itself.

10. The major premise for tactics is the development of operations that will maintain a constant pressure upon the opposition.

11. If you push a negative hard and deep enough, it will break through into its counterside.

12. The price of a successful attack is a constructive alternative.

13. Pick the target, freeze it, personalize it, and polarize it.

My experience from 5 years of daily blogging is that the trolls who come onto FOTM typically resort to Alinsky Rules #4 and #5.

Christians must watch out for #4. Leftist trolls deploy it against Christians by invoking OUT OF CONTEXT Jesus’ injunction to “judge not,” as if Christ our Lord actually means for us not to distinguish right from wrong. On the contrary, He abhors the “lukewarm” — the fence-sitters who are stand for nothing, being neither hot nor cold. (See “Why we must admonish the wicked“)

It should give us pause to know that Alinsky was an admirer of Lucifer — the rebel angel so full of pride that he thought himself to be “as God,” who Jesus said “fell as lightning” and so became Satan. To begin with, Alinsky dedicated his book, Rules for Radicals, to Lucifer, aka the Devil:

There’s more. Alinsky so admired Lucifer he wanted to join Satan in Hell. In 1972, Playboy magazine did an interview with Saul Alinsky. Toward the end of the long interview, Alinsky was asked about death and the afterlife. Although Alinsky professed agnosticism about the existence of God, he said he was brought up by orthodox Jews and considered himself to be a devout Jew until the age of 12, after which he “went through some pretty rapid withdrawal symptoms and kicked the habit.” Nevertheless, he told Playboy, “But I’ll tell you one thing about religious identity, whenever anyone asks me my religion, I always say—and always will say— Jewish.” The Playboy interviewer then asked Alinsky: “Do you believe in any kind of afterlife?” This was Alinsky’s response:

“ALINSKY: Sometimes it seems to me that the question people should ask is not “Is there life after death?” but “Is there life after birth?” I don’t know whether there’s anything after this or not. I haven’t seen the evidence one way or the other and I don’t think anybody else has either. But I do know that man’s obsession with the question comes out of his stubborn refusal to face up to his own mortality. Let’s say that if there is an afterlife, and I have anything to say about it, I will unreservedly choose to go to hell.

ALINSKY: They’re my kind of people.“

Saul Alinsky died a few months after the interview, on June 12, 1972, and no doubt got his wish.

Please visit our friends at Fellowship of the Minds, where this article originally appeared.