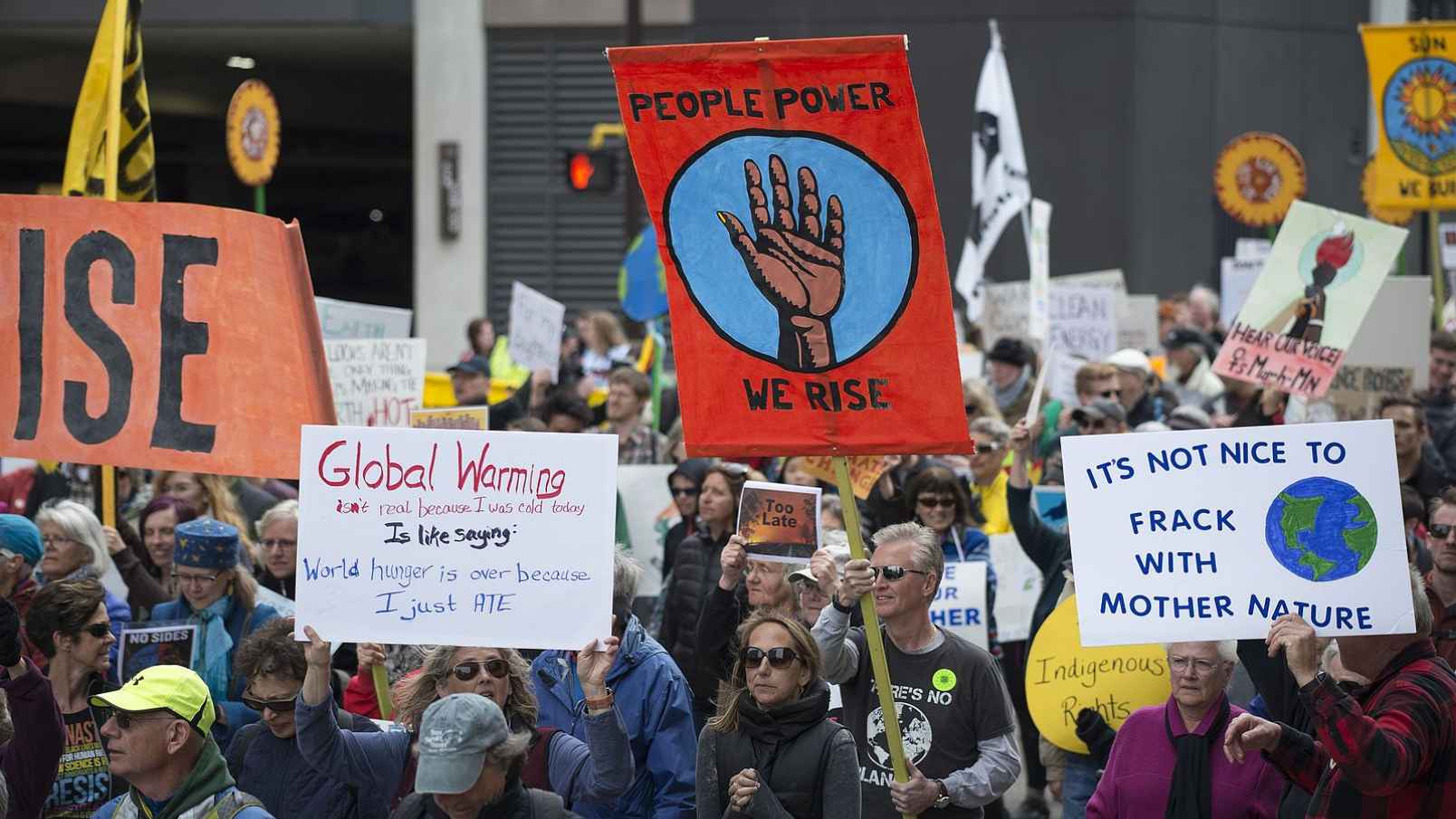 69% of progressives are ashamed to be Americans, but 63% are proud of their political ideology instead. The majority don’t attend religious services, but 73% list politics as their preoccupation.

Religiously unaffiliated voters are the most excited about attending political rallies and marches.

Numbers from one poll showed that, “religiously unaffiliated Democrats were more than twice as likely to have attended a rally within the past 12 months compared with their religious peers” and were “significantly more likely to have contacted an elected official or to have donated to a candidate or cause” or “bought or boycotted a product for political reasons or posted political opinions online”.

They’re also far more likely to be angry over Trump than Democrats who do have religious beliefs. Studies may label them secular, but they are animated by all the convictions of a political religion.

Political participation gives their lives meaning. It offers them the opportunity to save the world. Republicans are not just political opponents, but religious foes who threaten the planet’s survival.

And what do their political beliefs tell them about the traditional great questions answered by religion?

They believe that life is arbitrary and meaningless, except for the order imposed by government.

Government is their god and politics is their religion. Political power is their creed and their cult.

These are some of the numbers emerging from, “Hidden Tribes: A Study of America’s Polarized Landscape” and a PRRI poll. Most of what it tells us, we already know. The self-described progressives are more likely to be white and wealthy. They believe in speech codes, white privilege and sexism. And their beliefs are wildly out of step with the national average which usually falls somewhere in the middle.

While the left utterly dominates the national discourse through its control of the media, academia and the culture, its views, presented as unambiguously correct on campuses, in magazines and by celebrities, are extreme and shared by at best half the population. Half the country believes that immigration is a problem, that paranoia over sexual harassment is a problem, and that oversensitivity to Muslims has gone too far. The vast majority also believes that political correctness is a threat.

88% of American Indians, 87% of Hispanics, 82% of Asians, 79% of white people and 75% of black people believe that political correctness is a problem. Only 30% of progressives do. That’s what skews the numbers for white respondents below those of other minority groups on political correctness.

Despite their phony representationist gimmicks, the left is as white as a Bernie Sanders rally.

The problem isn’t just that leftists disagree with the rest of the country on free speech. It’s that they use their cultural power to control speech by manufacturing a fake consensus using the media and by imposing actual speech codes on campuses and in workplaces that punish the speech of the majority.

Political correctness isn’t the response of a tolerant majority, nor of a persecuted minority. It’s the cynical ploy by wealthy white leftist activists to protect the illusion that they are the majority.

That’s not new. Every totalitarian regime does this. But that’s not what America is supposed to be.

Speech control is crucial to the left because its real power, like that of every tyranny, lies in controlling the machinery of discourse. And as long as the skinny arm of the left holds the lever, it can go on lying to the rest of the country, not just with the manufactured consensus of their beliefs, which are actually baked in lefty think tanks in Washington D.C. and spread through the bicoastal media, but about itself.

And that’s a lie.

Populists scare the left, not because populism has anything to do with fascism. The Nazis were declining in popularity when Hitler played on the fears of the political establishment to get a position he was never elected to. Then he used fake news, political terror and a manufactured crisis to build up his power and suppress the political opposition.

Like the left, Hitler feared the public. The Nazi rallies and marches were meant to create the illusion that they represented an unquestioned majority. Most Germans shrugged and went along. As most Americans shrug and accept whatever lies the media tells them, even while knowing that they are lies.

Every time the left loses an election, its big lie totters. If the left truly represents the majority of Americans, why are so many Republicans in office? The answer invariably involves conspiracy theories. Racist Republicans disenfranchise minority voters. The Russians hacked our election. Fake news spread on Facebook rigged the election. The Supreme Court rigged the election. Someone stole the votes.

The routine claims that the elections that Republicans win are invalid (while those that Democrats win represent a firm popular mandate) aren’t just bad faith. They’re the emperor’s invisible pants.

The left can’t risk the belief that it really lost an election to take hold. That risks exposing its marginal status. Republicans can lose an election and still believe that the majority is on their side. The left lacks that equanimity because it knows that it is a minority faking its majority status with fake news.

Elections are not an exercise in politics for them. No more than they are for their Muslim Brotherhood allies. They are referendums on their religion. They are the arbiters of their convictions and their faith.

Trump Derangement Syndrome, like Bush Derangement Syndrome before it, not to mention the Reagan, Goldwater and Nixon syndromes, was felt most keenly on the secular left. It was the outcry of a messianic cult whose passions and hatreds operate within the political arena, but are not truly political.

The ugly hysteria of the Kavanaugh hearings had no place in normal political discourse. Nor do the barely masked incitements to violence and tribal invocations of warfare being broadcast by the left.

But these behaviors do not emerge from mere political convictions, but from politics as religion.

References to the civil war abound in many analyses of current events. I have written multiple articles from that perspective. But a more accurate model may not be the American civil war, but European religious civil wars which were animated not by mere politics, but by politics as a means of salvation.

American politics was built for the negotiation of interests. Its separations of church and state were meant to keep the country from being driven by religious factions and the violent passions of faith.

But the Founders had not properly anticipated how politics might become its own religion. Even though the events of the French Revolution had made it clear that the age of political religion had arrived.

Since then, the left has made a mockery of the separation of church and state by embedding its beliefs into the regulations, civic values and corporate policies of much of the country. While official religions have been forced out of political and civic life, their place has been taken by the cult of the left.

The left has always been a pseudo-religious movement. But in America, it remained a marginal one, able to make occasional inroads in limited areas, while being barred from real influence by two big parties.

The figures from the Hidden Tribes study and PRRI poll show the extent to which a sizable portion of the Democrats have been transformed from a partisan faction into a fanatical messianic cult. And that cult is using all its power and influence to wage a religious war, not just against its opponents, but on America.

The fundamental creed of the left is that America is inherently evil. It can only be redeemed by the rule of the left. Its struggles for power are not just partisan contests, but a struggle against evil.

America is an oppressive imperialist system of slaves and nuclear bombers, whose industries are destroying the planet, whose patriarchy has raped every other woman in the country, and whose racism is killing black children every day. This is what the left believes. Is it any wonder that it hates America?

And is it any wonder that the left cannot be compromised, appeased or reasoned with?

Leftists will fight to impose their values on America with trickery and lies, with elections and fake news, if they can. But if they fail politically, they will turn to political violence and terror.

That is the religious civil war that has come to Washington D.C. It is not a civil war of territories, but of convictions. Its causes are not to be found in economics or policies, but in the fanatical beliefs of a cult.