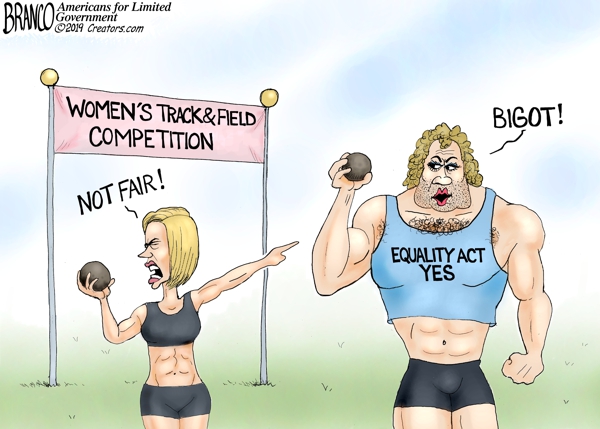 (Natural News) Another biological male pretending to be a “female” has taken the gold in women’s sports, this time “winning” the NCAA women’s track championship in the 400 meter hurdles competition.

Reports indicate that “CeCe” Telfer, a black “woman” who was born with a penis and testicles, swept the race, beating out the second-place runner by a whole second – which is to be expected, considering CeCe is actually a guy, and the runners up all girls.

But that’s now how the Left Cult sees it. After “winning” the race, CeCe’s coach, Zach Emerson, gushed about how CeCe had worked hard to achieve this so-called accomplishment, adding that he’s proud about the outcome.

“It was tough conditions out here with the wind and the heat over the last three days but, as she has over the last six months, CeCe proved herself to be tough enough to handle it,” Emerson is quoted as saying, revealing nothing about how the second-, third-, and fourth-place biological females feel about the situation.

“Today was a microcosm of her entire season,” Emerson added about CeCe being declared the victor. “She was not going to let anything slow her down. I’ve never met anybody as strong as her mentally in my entire life.”

For more crazy stories like this, be sure to check out Gender.news.

Emerson is probably telling the truth about his own astonishment concerning this whole situation, seeing as how CeCe doesn’t have a vagina and was born with male XY chromosomes – one of the first men to ever “win” a championship in women’s sports.

According to Emerson, CeCe’s “victory” represents the first time that a student-athlete attending Franklin Pierce University (FPU) in New Hampshire has claimed an individual national title.

To anyone with a working brain, it’s obvious why CeCe was able to achieve this feat: she’s a man. But to the deranged Leftists praising CeCe as some kind of LGBTPQ hero, men who compete against women and beat them are idols to be worshiped because the Left Cult is unable to discern that men are physically stronger than women.

It’s a somewhat hilarious irony that the part of “tolerance” and “equality” is accepting of biological men ruining women’s sports like this. After all, how many real women even stand a chance against men when it comes to athletic competition? Not many, which means that true women’s sports are pretty much a thing of the past at this point.

What’s transpiring here is really just the ugly, rotten fruit of a toxic ideology that was planted long ago by the first wave of rabid feminists, which demanded that society completely do away with all notions that men and women are anything but equal in every way. Well, now these feminists – are we on the fourth or fifth wave at this point? – are starting to reap what they’ve sown as they continue to push for the destruction of manhood, the “patriarchy,” and pretty much everything else that in any way differentiates men as being different from women.

“I have been told by feminists for a long time now that women are no different than men and women can do just as good a job at everything a man can do,” wrote one commenter at The Gateway Pundit, illustrating this point using sarcasm. “So, what is the athletes’ issue? You are equal to men and therefore can beat men; work harder.”

Be sure to check out a related article about how, eventually, no more real females will even be involved in sports at all – because what’s the point?