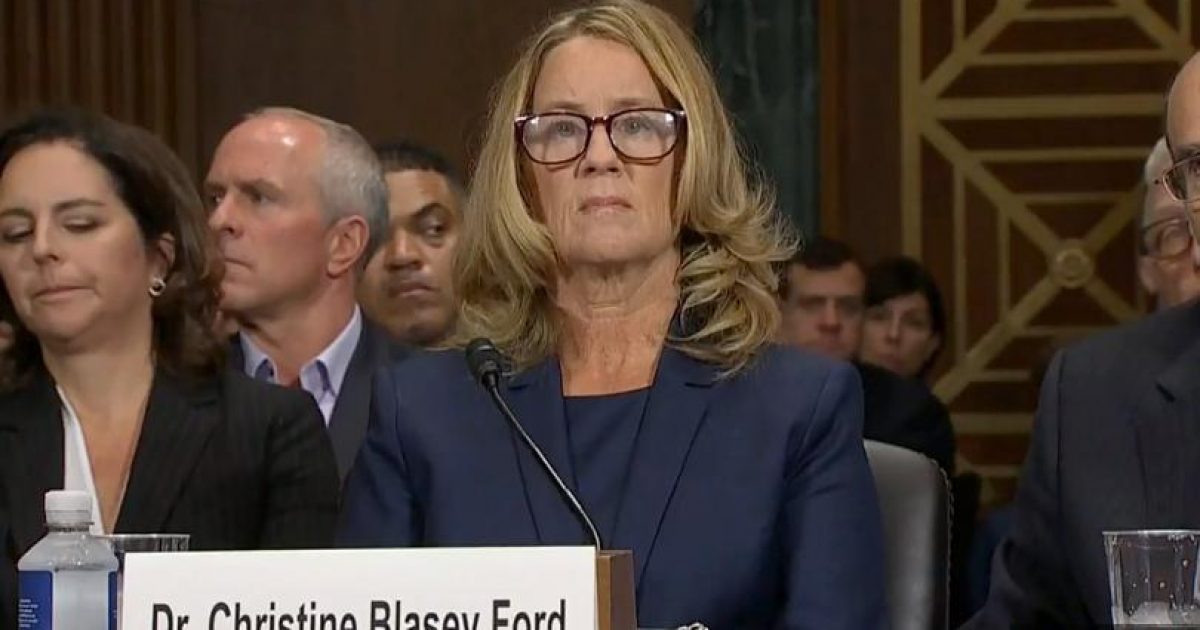 Let me say up front that I am not in agreement that if Judge Brett Kavanaugh is not confirmed that everything goes down the tubes. I don’t think he is an originalist or a Constitutionalist. One could question whether he is a historical conservative. I think there are plenty more constitutional and conservative judges that could have been put forward, and I believe the allegations, whether they are true or not, should not even be given any weight considering the amount of time it took for her to actually name the name of Judge Kavanaugh. However, in listening to her testimony today, I was struck by one statement that she made after saying how traumatized she was because of the incident, and that statement was how she responded to Mark Judge when she encountered him six to eight weeks after the alleged attack.

Ford said that she was with her mother and as a teenager didn’t necessarily want to be seen with her mother. So, she entered the Potomac Village Safeway grocery store in suburban Maryland through a different door than her mother.

At that point, she encountered Mark Judge, whom she named as being with Kavanaugh during the alleged attack.

She claimed, “Mark Judge looked like he was working there, arranging the shopping carts.”

The next thing she said, at least to me, seems to not be a part of how someone who had been victimized by another would behave.

“I said hello to him and his face was white and very uncomfortable saying hello back,” she said. “We had previously been friendly at the times we saw each other over the previous two years.”

“I wouldn’t characterize him as not friendly, he was just nervous and not really wanting to speak with me,” she added. “He looked a little bit ill.”

Heres’ my question: Why was Ford so “friendly”? After all, this is one of her alleged assailants, right? Why would she not quickly divert away from him once she had recognized him? Why did she not respond out of anxiety or turn quickly to get away? Why say hello?

To me, this was the one thing that stood out as the most out of place statement in her entire testimony. In fact, she didn’t seem to be able to recall the year that it occurred.

Dr. Ford is an American professor of psychology at Palo Alto University and a research psychologist at the Stanford University School of Medicine. While some claim that she heads up Stanford’s CIA Undergraduate Internship Program, I was unable to confirm any of that through the university because no one in that department would answer the phone nor return my calls. However, we do know that her father works in the Central Intelligence Agency.

Why is that important? Because in all of this, the CIA is part of the Deep State and the issues of trauma and memory and other facets of Ford’s story would be known to her in presenting her claims.

Judge seemed to reference working at a grocery store in high school in an excerpt from his memoir “Wasted: Tales of a Gen X Drunk

” in a paragraph where he discusses “suffering catastrophic hangovers…that make getting through the day an Olympic event.”

“This was never more evident to me than when, to raise money for football camp, I spent a few weeks working as a bag boy at the local supermarket,” he wrote in the book.

Ford said that Judge and Kavanaugh both laughed at her expense as Kavanaugh was on top of her on a bed attempting to remove her clothing.

She says she made several attempts to get away, but was finally successful. However, I never really heard a reason for her success. Then she claimed to have heard Kavanaugh and Judge talking with others. Yet, when questioned by the Republican special counsel, it seems that her claims didn’t quite line up, as she was still in the room at the time, then claimed to have quickly fled the house.

Now, here’s the thing: It strikes me as very odd that someone who had acted in the manner described would then be addressed by the victim in the manner she did. Doesn’t it to you?

It’s been nearly 40 years. I have addressed the issue of claims like this before with biblical law and as far as I’m concerned, she has no way to prove any of this.

I listened as Democrat senator after Democrat senator failed to ask any serious questions of her. Instead, they praised her for her bravery (35 years after the fact, no doubt) and chided the committee for not having the FBI investigate and no doing things a certain way.

The reality is that in most of their claims, Senator Chuck Grassley pointed to the fact that they had tried to do the very things Democrats accused them of not doing, except the FBI investigation.

The problem with the FBI doing an investigation though is a simple one: There is no federal crime alleged. There have been no charges brought. As Democrats continually reminded Ford, she was not on trial, the reality is that neither is Judge Kavanaugh. He is being interviewed for a job. That’s all.

The hypocrisy of Senator Mazie Hirono (D) to claim that “character matters” only matters when it’s someone she is opposed to. You certainly don’t hear her shouting that mantra about former President Bill Clinton or his wife Hillary, do you? You don’t hear her making that statement in the context of Rep. Keith Ellison and the women accusing him of abusing them verbally and physically, do you? Nope, and you won’t hear it.

At the end of the day though, I agree with the statement by Hirono. Character does matter. It should matter, but sadly, people have been pulled into an argument about whether or not something took place 35 years ago in a “he said, she said” scenario.

As far as I know, Kavanaugh doesn’t stand accused of such behavior in the past 3 decades, which tells me that he probably has an OK character, at least when it comes to such allegations. However, while character is very important, when one is being confirmed to sit on the Supreme Court, the standard for being in that capacity must not only be one of character, but also be a question of whether or not they are constitutional in their approach to the law. In Kavanaugh’s case, he is not. He believes things like Roe v. Wade is “settled law.” It is not. It is a ruling and constitutionally, the only body authorized to make law is Congress, not the Judicial Branch. He believes heavily in precedence when it is completely against constitutional law. He is one that sacrifices the protections of the Fourth Amendment to advance the disastrous infringements of the rights of the American people via the War on Terror.

So, I think that the Ford testimony is nothing more than political theater, and whether or not the incident actually took place or not, cannot be proved and this is nothing but an allegation. It should have been dumped the moment it was made, considering the amount of time that has passed.