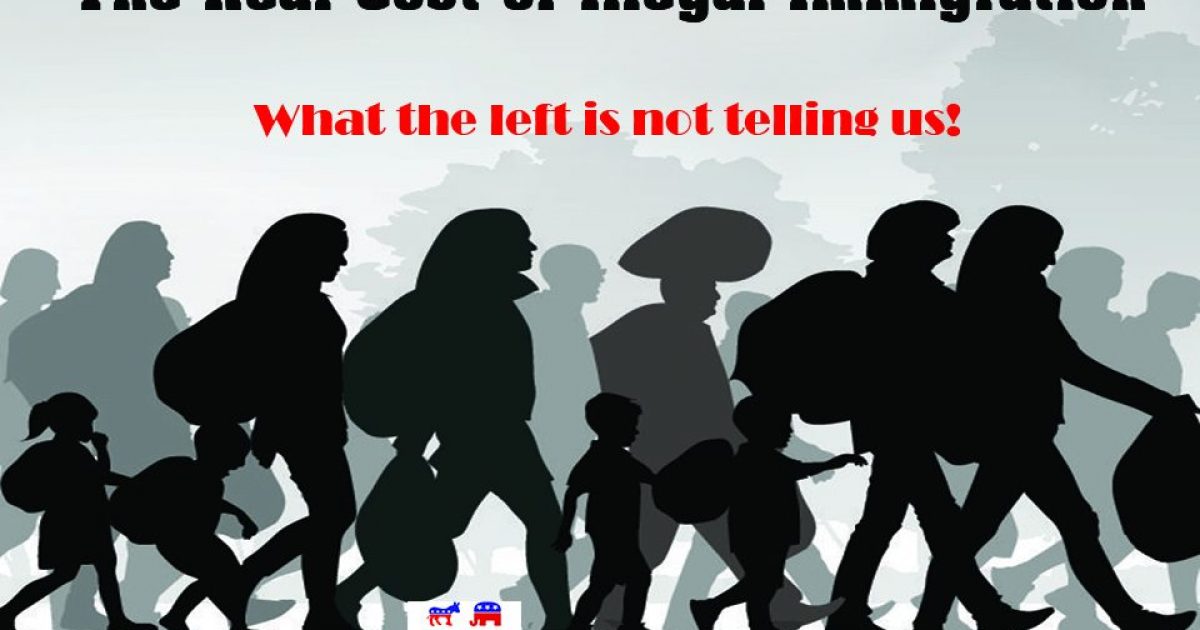 We will show the amount of money all the illegal aliens cost us every day, and it rises at a rate that blows many minds. Our nation cannot keep giving money to people that put nothing back in. It will bankrupt the United States if it keeps going with no restraints.

Democrats do not care about the people that elected them because if they did they would vote to build the wall and make sure people come into our nation the legal way. However, let us not draw down to the levels of ineptitude at those ideas. The numbers we present with other data will make you see that people coming into our nation divert money that could otherwise be used for constitutional purposes rather than unconstitutional ones.

We are going to use statistics from One America News Now to show the amount of money spent on illegal aliens today and so far this year.

You can go to https://www.oann.com/ and a widget in the upper right-hand corner clicks off the increase of costs. The data from those figures come from a variety of groups that give the estimate based upon the amount of illegal aliens. Those groups are as follows:

Those are some very good groups to derive the numbers from.

Now, let us get to some other items that few, if any, fake news stations look at or show.

From Discover the Networks, we find all sorts of items that should cause a common individual to be concerned about the illegal immigrants.

In a 2006 study, Deborah Schurman-Kauflin of the Violent Crimes Institute in Atlanta estimated, conservatively, that from January 1999 through April 2006 approximately 240,000 illegal aliens had committed about 960,000 sex offenses in the United States.”

These statistics are shown from Los Angeles and we can use that city as an example of what happens in nearly every city in the United States. We have to think about what these individuals do to our cities since they are in our nation against our laws and violate these laws every second they are here. We see that up to 2006, the number of sex offenses came to 960,000. That is 960,000 too many and since they were committed by illegal aliens, we can safely say they would not have been committed had we had a solid border where they could not sneak into our nation illegally!

While illegals paid taxes, we have to wonder how that could be and they were not apprehended since they are not citizens and cannot obtain a Social Security card unless they stole one, or made up one. Just the other day it was learned that many of these illegal aliens had stolen other people’s Social Security numbers and were using them fraudulently. This is just another way these illegal aliens have broken our laws even after getting into our nation.

“The fiscal costs of illegal immigration are also very high. According to the Center for Immigration Studies, in 2002 illegal-alien households imposed, in aggregate, costs exceeding $26 billion on the federal government while they paid $16 billion in federal taxes — thereby creating a net fiscal deficit of $10.4 billion per year at the federal level, or $2,700 per household. Among the largest components of this deficit were Medicaid ($2.5 billion); medical treatment for the uninsured ($2.2 billion); food-assistance programs such as food stamps, WIC, and free school lunches ($1.9 billion); the federal prison and court systems ($1.6 billion); and federal aid to schools ($1.4 billion). A major reason why illegal aliens are, on balance, such a drain on the American Treasury is because approximately 60 percent of them lack a high-school degree.”

This is something we need to read closely to see just what other costs Americans are on the hook for because of illegal aliens. Why should the taxpayers of the United States, being a citizen, of course, pay for the welfare, education, food stamps, Medicaid, WIC, and so many other programs many of our own citizens have trouble obtaining and they were born here?

“The National Academy of Sciences has estimated that the average immigrant without a high-school degree will, over the course of his or her lifetime, impose a net cost — above and beyond any taxes he or she pays — of nearly $100,000 on U.S. taxpayers; this cost does not include the cost of educating the immigrant’s children. Based on that figure, the estimated 6 million legal immigrants lacking a high-school diploma and residing in the U.S. today, will cost taxpayers more than a half trillion dollars over their lifetimes.”

Those figures do not reflect the recent increase of Illegal Aliens that have come into our nation through an Unprotected border! They may be twice that in the coming years and the final cost will be a TRILLION dollars! If that is not an Emergency, what is? It is time for our nation to take a stand on this border dispute and let it be known that we do not want anymore Illegal Aliens, but if they wish to come into our nations to become Citizens, that is a different story.

We have shown but a very small part of this National Emergency and why it is real. We do not like the idea of people crossing into our nation, breaking our laws then take advantage of a welfare system that they are not entitled to since they are not Citizens and when they get Welfare and the like, they take that away from a Citizen that needs it. As shown partly here, Illegals have cost and will cost our nation Billions of dollars more then ten walls put together and that is just in a few hours! It is a National Emergency when our nation provides all the comfort a Citizen is entitled to and gives it to an individual who in many cases does not like our nation or speaks English!

In just over and hour, the time it took to write this article, the amount of money it cost the United States for illegal aliens has gone up as shown.

In just the time it took to write this article, our taxes have paid out some 35 million dollars for the day!

If that is not a National Emergency, nothing else should ever be declared!

Leon Puissegur is a Disabled Vietnam Veteran with 3 children and 9
grandchildren. He has been married to the same wonderful lady for 43
years. He is an award winning author and has been writing opinion pieces over the years and in just the last few years has written 4 books and a large amount of articles on many
sites. You can purchase his books at Amazon. Pick up his latest The Oil Man.