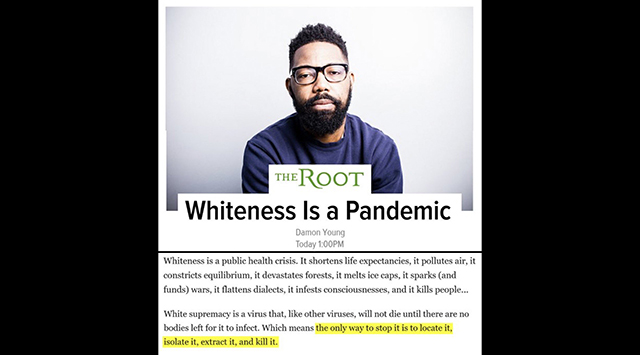 “Whiteness” is a “pandemic” and “the only way to stop it is to locate it, isolate it, extract it, and kill it,” so says The Root’s Damon Young.

Young wrote this column in response to a white guy with a sex addition allegedly killing six Asian woman and two white men at massage parlors in Atlanta.

From The Root, “Whiteness Is A Pandemic”:

Whiteness is a public health crisis. It shortens life expectancies, it pollutes air, it constricts equilibrium, it devastates forests, it melts ice caps, it sparks (and funds) wars, it flattens dialects, it infests consciousnesses, and it kills people…

…It extends back 400 years and has tentacles clawing everywhere white supremacy exists here, in America, which is everywhere.

…White supremacy is a virus that, like other viruses, will not die until there are no bodies left for it to infect. Which means the only way to stop it is to locate it, isolate it, extract it, and kill it.

Damon Young is the editor-in-chief of VSB, a contributing opinion writer for The New York Times, and the author of What Doesn’t Kill You Makes You Blacker (Ecco/HarperCollins)

How is this anything other than a call for genocide?

If Young replaced “White” with “Black” or “Jewish” he’d not only lose his job, his publisher and have his bank account/PayPal shut down but he’d likely be put on a no-fly list and be put under surveillance by the FBI.

As whites are the target, he’s probably instead looking at a promotion.

Such is life under “white supremacy”!