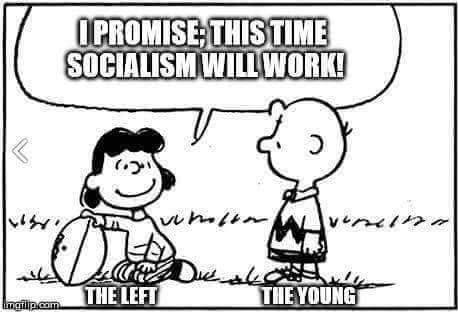 Many years ago, my erstwhile, faux socialist friend Stephanie exclaimed, in a moment of great frustration when I disagreed with a stance she took:

“I’ve made up my mind. Don’t confuse me with facts!”

Stephanie exemplifies one of the stubborn attributes of the Left: They persist in advocating socialism/communism, in spite of the testimony from history that it doesn’t work. Bearing silent witness are the bones of HUNDREDS OF MILLIONS of those whom communist regimes had slaughtered in the 20th century. But the Left insist that “they” didn’t do socialism/communism properly, and that “this time” they’ll make it work.

Here are two recent examples of the failure of socialism which, once again, will fall on deaf ears.

Panera Bread Company is a chain store of for-profit bakery-café fast-casual restaurants with over 2,000 locations in the United States and Canada.

In November 2010 in a pious TED talk, Panera founder Ron Shaich announced the inception of Panera Cares — a chain of six nonprofit “community cafés” in Dearborn, Portland, Chicago, Boston, and St. Louis, which operate on a “pay-what-you-can” model “to help raise awareness about the very serious and pervasive problem of food insecurity (hunger) in the U.S.”.

Customers pay whatever amount they “can” for food, while others are encouraged to pay more (“donate”) in accordance with “suggested donation amounts” listed for all menu items “designed to help you understand the cost of ‘paying it forward’ and assisting those who struggle with food insecurity.”

Alas, human nature being what it is, although some people paid their “fair share” (whatever that means), many others simply took advantage of the communist “pay-what-you-can” model by paying little or nothing. The cafés reportedly were “mobbed” by students and homeless people looking for a free meal.

As an example, the Portland-based Panera Cares communist café was reportedly only recouping 60% to 70% of its total costs because of students who “mobbed” the restaurant and ate without paying, as well as homeless patrons who visited the restaurant for every meal of the week. The location eventually limited the homeless to “a few meals a week.” (DailyWire)

None of the communist cafés was self-sustaining.

In February 15, 2019, Panera Cares closed its last communist café, in Boston. In an emailed statement, Panera Bread says: “Despite our commitment to this mission, it’s become clear that continued operation of the Boston Panera Cares is no longer viable.”

In 2016, Panera went private after being sold to a private equity firm, JAB Holding Company in 2017 in a $7.5 billion deal. In November 2017, founder and CEO Ron Shaich stepped down and was replaced by former Panera president Blaine Hurst. (Nation’s Restaurant News)

Not only is human nature such that we will take advantage of socialist/communist pricing like Panera’s “pay-what-you-can,” we will exact revenge if welfare offerings are withdrawn.

In Gibralta, the baboons and macaque monkeys that freely roam the rock are a big tourist attraction, and are fed by kind tourists. Alas, the simians became so used to the welfare that they feel entitled to the free food — they actually throw rocks at the tourists if they are not fed. Gibraltar’s tourism minister Ernest Britto said, “Children are frightened. People cannot leave their windows open for fear of the monkeys stealing. Monkeys can bite, and contact with them runs the risk of salmonella or hepatitis.”

Like the baboons of Gibralta, recipients of a basic income (BI) pilot project in Canada are enraged at the project’s surprise cancellation and are suing the government.

Members of an internationally lauded basic income pilot project in Canada are taking their province to court over its surprise cancellation, arguing that the Ontario government’s decision is unethical and that it was made in bad faith.

One of the plaintiffs in the lawsuit is Tracey Mechefske, a basic income recipient in Lindsay, Ont., who receives CDN $2,803 (US $2,125) a month although her husband is employed.