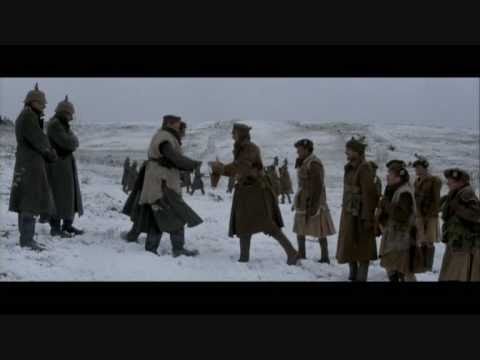 Nothing tops the birth of Jesus Christ.

Our Savior’s birth, life, death and resurrection is the greatest miracle the world has ever seen.

But 105 years ago something very special happened.

Today, as we watch political feuds and bad will between nations build, let’s remember what happened in 1914. 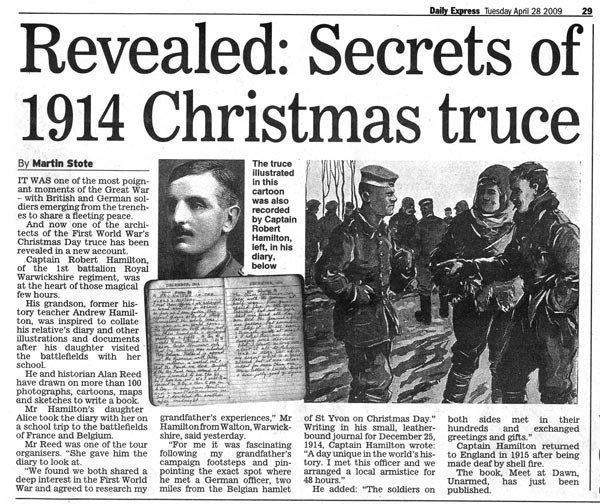 105 years ago today, history recounts a miracle. It is a miracle that has not since been duplicated and may never be. A German soldier, who was stationed on the Western Front, bravely left his bunker and walked across “no man’s land” to meet with his British adversaries. It was then that he offered a truce.

What transpired over the next two days was beyond amazing. It is this evidence of peace, and human goodness, in times of bitter conflict that gives rise to hope for all mankind, even a century later.

Staff Sgt. Clement Barker of Ipswich was there and wrote a letter about the events. The letter was discovered decades after his death by a Nephew who was going through his Father’s belongings.

Here is an excerpt from Barker’s letter as printed by The Ipswich Star in 2012:

Sgt Barker wrote to his brother Montague: “…a messenger came over from the German lines and said that if they did not fire Xmas day, they (the Germans) wouldn’t so in the morning (Xmas day).

“A German looked over the trench – no shots – our men did the same, and then a few of our men went out and brought the dead in (69) and buried them and the next thing happened a football kicked out of our trenches and Germans and English played football.

“Night came and still no shots. Boxing Day the same, and has remained so up to now…

“We have conversed with the Germans and they all seem to be very much fed up and heaps of them are deserting.

“Some have given themselves up as prisoners, so things are looking quite rosy.”

As history recounts there were lots of men who shared Sgt. Barker’s optimism. There were many who did not expect the war to go much longer but, unfortunately, their optimism was misplaced. They would fight for four more years and World War I would claim the lives of approximately 10 million soldiers and 7 million civilians.

As Michel Chossudovsky explains, it was not the intention of the top brass to let the troops negotiate their own truces or cease-fire arrangements again:

The Military High Command on both sides was firmly opposed to the Spirit of Christmas in the trenches. The Mot d’ordre of the French and British high command was to promote an “offensive spirit” in the trenches. In the words of General Sir Horace Smith-Dorrien, “Friendly intercourse with the enemy, unofficial armistices, however tempting and amusing they may be, are absolutely prohibited“:

Instructions were issued to commanders of all Divisions:

Smithsonian Magazine recounts that the 1914 Christmas Truce was not isolated but widespread across many sections of the Western Front:

Their truce–the famous Christmas Truce–was unofficial and illicit. Many officers disapproved, and headquarters on both sides took strong steps to ensure that it could never happen again. While it lasted, though, the truce was magical, leading even the sober Wall Street Journal to observe: “What appears from the winter fog and misery is a Christmas story, a fine Christmas story that is, in truth, the most faded and tattered of adjectives: inspiring.”

The first signs that something strange was happening occurred on Christmas Eve. At 8:30 p.m. an officer of the Royal Irish Rifles reported to headquarters: “Germans have illuminated their trenches, are singing songs and wishing us a Happy Xmas. Compliments are being exchanged but am nevertheless taking all military precautions.” Further along the line, the two sides serenaded each other with carols—the German “Silent Night” being met with a British chorus of “The First Noel“—and scouts met, cautiously, in no man’s land, the shell-blasted waste between the trenches. The war diary of the Scots Guards records that a certain Private Murker “met a German Patrol and was given a glass of whisky and some cigars, and a message was sent back saying that if we didn’t fire at them, they would not fire at us.”

‘Come out, English soldier; come out here to us.’ For some little time we were cautious, and did not even answer. Officers, fearing treachery, ordered the men to be silent. But up and down our line one heard the men answering that Christmas greeting from the enemy. How could we resist wishing each other a Merry Christmas, even though we might be at each other’s throats immediately afterwards? So we kept up a running conversation with the Germans, all the while our hands ready on our rifles. Blood and peace, enmity and fraternity—war’s most amazing paradox. The night wore on to dawn—a night made easier by songs from the German trenches, the pipings of piccolos and from our broad lines laughter and Christmas carols. Not a shot was fired.

The 1914 Christmas Truce is a wonderful story of humanity in the midst of a ferocious conflict. War is hell. But for a brief moment in 1914 the men of the Western Front remembered what it was like to live in peace and show compassion toward their enemies.

What can we learn from the 1914 Christmas Truce?

We learn that what many of us were taught as children is not forgotten as adults. Christmas is about the birth of Jesus Christ and nothing should stand before the celebration of His birth.

We also learn that not much has changed in the 105 years since.

The same compassion that was exhibited in 1914 is at the core of the hearts of peace-loving people all over the world. Putting a rifle in a young man’s hands does not necessarily change what is in his heart.

And, just as in 1914, those orders, more often than not, come from the lips of hardened warmongers who lust only for more power and care nothing of the collateral damage they create.

As we celebrate Christmas with our families, some 105 years after this miracle, let us not forget that somewhere in Syria, Afghanistan or some other war-torn nation, there is a soldier who is not able to be home with his family. He sits in his own trench, although that may be somewhat figurative in 2019, and desperately wants nothing more than a return of the miracle of 1914.

Have a blessed and wonderful Christmas Day.

If you need a little inspiration then I would highly suggest you watch the video featured below. I found myself watching it more than once. It’s an exceptional recounting of this story and may help to restore a little of your faith in humanity this holiday season. (Note: This article was originally published in 2014 and thanks to YouTube censorship we are now using a substitute video).