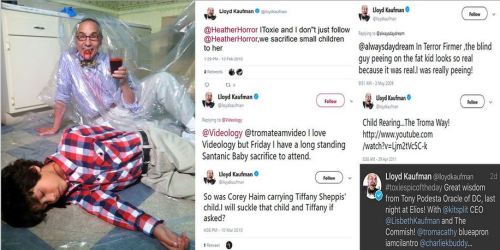 Yesterday, our TrailDust published a post, “How Miley Cyrus Got That Way,” on the discovery of tweets of Hellywood director James Gunn, “joking” about his own fantasies about raping and molesting children, and about the Holocaust, rape, Jews, AIDS, and Mexicans.

James Gunn, 51, is most famous for directing Guardians of the Galaxy and its sequel; he is also an executive producer of Avengers: Infinity War — all Marvel Studios movies. In 2015, Marvel Studios was “integrated” into the Walt Disney Movie Studios.

Interesting piece of trivia: The surname Gunn is derived from the Irish name MacGilGunn, meaning “sons to the servants of the god of the dead”.

Disney quickly fired Gunn as director of the franchise movie, Guardians of the Galaxy Vol. 3.

The never-Trump Republican columnist, Ben Shapiro, defended Gunn, saying Disney should not have fired him:

James Gunn is the director of Guardians of the Galaxy. He was slated to not only fill out the rest of that series but perhaps take over the entire Marvel franchise after the final Avengers film. Now he’s out of a job over decade-old disgusting tweets regarding rape, monkeys ejaculating on children, and similarly horrifying material. The tweets are purely loathsome.

That doesn’t mean he should have lost his job at Disney…. If everyone in Hollywood lost their jobs for saying loathsome things, there would be a lot of people in Hollywood about to lose their jobs (virtually every major comedian, for starters)….

Everyone is far too gleeful about scalps these days. That bespeaks a country full of folks interested in first use of rhetorical nuclear weaponry rather than a country full of people who would like, in the end, to go back to their daily business without having to worry about ending other people’s careers.

Without a limiting principle, the outrage machine will simply destroy us all.

Glenn Beck — who in 2016 told Christians they’d go to Hell if they didn’t vote for Ted Cruz — also defended Gunn in this pseudo-pious tweet:

@jamesGunn I will stand for you.We all make mistakes, we must come together as each of us grow and change.Forgive others in hope that they will forgive themselves and others too. Reach beyond your comfort zone and be kind. You don’t need my forgiveness J.G, but I offer friendship https://t.co/qaD6snFPhM

TrailDust’s post did not show Gunn’s pedo tweets, which Gunn quickly deleted, but not before enterprising netizens had taken screenshots and archived them. I think you should see them, as well as some really disturbing images Gunn posted to Instagram, and decide for yourself whether they’re “jokes”.

“I like it when little boys touch me in my silly place. Shhh!”

“The Hardy Boys and the Mystery of What It Feels Like When Uncle Bernie Fists Me.”

“The Expendables was so manly. I fucked the shit out of the little pussy boy next to me! The boys ARE back in town!”

“My new film: Jerkloose – A small town where beating off is legal & 1 high school kid jerks off in front of the others to show what fun it is.”

“This hotel shower is the weakest ever. Felt like a three year old was peeing on my head.”

“‘Eagle Snatches Kid’ is what I call it when I get lucky.”

“Three Men and a Baby They Had Sex With”

“About the vomit as I’m stuffed with etouffe and eggplant. I’m Louie Andersoning my ass out (just the fat, not the little boys).”

“I remember my first NAMBLA meeting. It was the first time I felt ok being who I am. Some of those guys are still my BFF’s.”

“Oh, I forgot to tell you guys – last night I did a reading with a convicted pedophile.”

“The first time I masturbated to Justin Bieber it was a joke, but now I can’t stop! He’s like jerk off crack!”

A girl with a pussycat head:

A giant rabbit grabs a crying girl – the message “I hope you all have a wonderful Easter”:

Man wearing a rabbit mask – the message “Happy Easter, everybody! The Easter bunny will be at your house at 3 am, staring in your bedroom window“:

Drawing of a baby boy making the F-you middle-finger gesture:

“I have never actually f—ed a raccoon“:

Dog in front of large pile of human bones:

I don’t believe the Gunn and Kaufman tweets are jokes. Besides, what’s so funny about pedophilia and child sacrifice?

Hollywood is a cesspool.