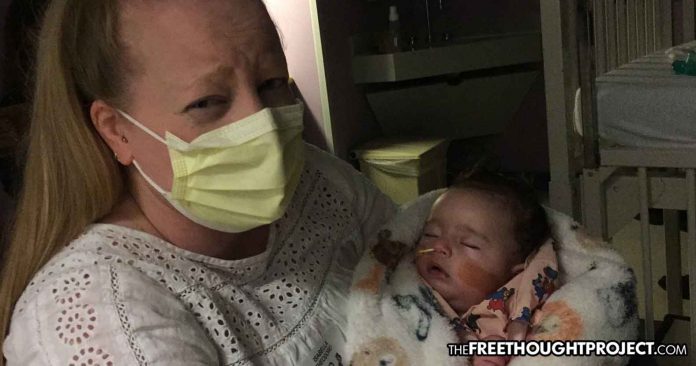 Suzy and Peter Saad are two loving parents of three who met in medical school and both have Master’s degrees. Their happy lives would be forever changed last year, however, when they walked into a Connecticut hospital after Suzy felt pains during her third pregnancy. According to the couple, Suzy would be drugged, forcibly given a C-section, and her baby taken. Months later, and after multiple reports of the suffering of their newborn daughter Sofia, they are still fighting to get her back.

The couple’s nightmare started when they were travelling from Tennessee to New Jersey last year to attend a funeral for one of Peter’s family members. After the stress of the funeral, Suzy was feeling some anxiety, so their family suggested they take a couple’s trip up the coast to Maine, six hours away. Suzy and Peter then left their two older boys with family, and drove to a place they have been wanting to visit. However, they would never make it.

As the couple drove to Maine, Suzy began to experience some pain, so they decided to stop at a hospital in Connecticut. That’s when the couple started living a horror story.

HER HUSBAND’S FAMILY IS ORIGINALLY FROM EGYPT, ALTHOUGH PETER GREW UP IN THE UNITED STATES AND HAS BEEN A U.S. CITIZEN SINCE HE WAS A CHILD. HIS FAMILY IN EGYPT ARE COPTIC CHRISTIANS, A MINORITY GROUP IN A COUNTRY THAT IS PREDOMINATELY MUSLIM.

SHE WAS ALLEGEDLY DRUGGED AND FORCED TO HAVE CESAREAN SURGERY, AND HOSPITAL STAFF THEN ALLEGEDLY WORKED TOGETHER WITH SOCIAL SERVICE WORKERS TO TAKE CUSTODY OF HER BABY.

The couple filmed their interactions with the hospital staff and at no time did they appear to be on drugs or any threat whatsoever to their baby Sofia. According to the family, after Sofia was born, things got even worse.

The couple filmed their interactions with the hospital staff and at no time did they appear to be on drugs or any threat whatsoever to their baby Sofia. According to the family, after Sofia was born, things got even worse.

I WAS CRYING ABOUT HOW WE HAD BEEN TREATED AND THAT MY HEART RATE BY THEN WAS NEARLY 200 AND MY BLOOD PRESSURE WAS 180/120.

AFTER I CONTINUED TO COMPLAIN ABOUT IT AND AS IT CONTINUED TO CLIMB, THEY FINALLY GAVE ME MY BETA BLOCKER BUT STILL REFUSED TO GIVE ME MY DIABETES MEDICINE.

AFTER THAT PETER AND I WERE EXHAUSTED AND BOTH SLEPT FOR AROUND 8 HOURS STRAIGHT.

THE NEXT MORNING WHEN WE AWOKE, MY BLOOD SUGAR WAS ALSO VERY HIGH AND THEY FINALLY GAVE ME THE METFORMIN I WAS PRESCRIBED BY MY GENERAL PRACTITIONER.

THEN A NEONATOLOGIST CAME IN OUR ROOM AND STARTED TELLING US THAT HE “KNEW” WE DID NOT CARE ABOUT OUR BABY BECAUSE IF WE DID, WE WOULD HAVE BEEN IN THE NURSERY FOR EVERY FEEDING AND THAT IF HE WANTED TO, HE COULD HAVE US PROSECUTED FOR NEGLECTING HER JUST BECAUSE WE DIDN’T SHOW UP FOR 2 OF HER FEEDINGS!!

WE EXPLAINED TO HIM EVERYTHING THAT HAD HAPPENED AND THAT I WAS MADE TO GO THE ENTIRE PREVIOUS DAY WITHOUT ANY OF MY MEDICATIONS, THAT I HAD BEEN IN EXCRUCIATING PAIN AND THAT WE WERE BOTH EXHAUSTED AND JUST NEEDED SOME SLEEP.

HE SAID HE DIDN’T CARE AND THAT WE “SHOULD HAVE BEEN THERE.”

WE ASKED HIM ISN’T THE NURSERY THERE TO GIVE THE PARENTS SOME REST?

HE SAID NO, THAT THIS WAS A “BABY FRIENDLY HOSPITAL” AND THAT WE, AS THE PARENTS WERE SUPPOSED TO DO ALL THE FEEDINGS.

WE TOLD HIM THAT WE DIDN’T SEND OUR DAUGHTER THERE WILLINGLY.

HE CHANGED THE SUBJECT AND STARTED SAYING THAT HE “KNEW” WE DID NOT EVEN HAVE CUSTODY OF OUR OTHER CHILDREN AND THAT WE WOULD NOT BE ALLOWED TO KEEP SOFIA ANYWAY SO THERE WAS NO NEED FOR US TO SEE HER ANYMORE.

WE ASKED HIM HOW COULD WE BE TRYING TO “RUN FOR THE BORDER” IF WE DIDN’T EVEN HAVE OUR CHILDREN WITH US AT THE TIME? HE DIDN’T HAVE AN ANSWER.

WE BEGGED AND PLEADED WITH HIM TO PLEASE LET US SEE OUR BABY.

HE TOLD US THAT THE DCF WOULD BE THERE TO TAKE CUSTODY OF HER ON TUESDAY AND THAT HE WAS GOING TO TESTIFY AGAINST US ABOUT HOW WE “NEGLECTED” HER BY SLEEPING DURING HER SCHEDULED FEEDING TIMES AND ABOUT HOW I “REFUSED” TO SIGN A MEDICAL RELEASE FOR MY PRENATAL RECORDS.

I TOLD HIM THAT WASN’T TRUE AND THAT I NEVER REFUSED TO SIGN ANYTHING. I ASKED HIM IF I SIGNED THE MEDICAL RELEASES AND WE MAKE HER AN APPOINTMENT WITH A PEDIATRICIAN IN CT, WOULD WE BE ALLOWED TO KEEP OUR DAUGHTER AND TAKE HER HOME?

It has now been nearly seven months since the state of Connecticut kidnapped the couple’s baby and they are fighting every day to get her back.

What’s more is the fact that the couple alleges Sofia is being mistreated in state care and nearly died.

OUR DAUGHTER NEARLY DIED IN THEIR CARE AFTER WE BEGGED THEM NOT TO LET THE FOSTER FAMILY SEND HER TO DAYCARE AT ONLY 8 WEEKS OLD AND SHE CAUGHT RSV AND ENDED UP FIGHTING FOR HER LIFE IN THE HOSPITAL, BUT THEY DID IT ANYWAY BECAUSE THEY SAID THAT’S WHAT WAS “MOST CONVENIENT FOR THE FOSTER FAMILY.”

The couple has since started an online petition and a GoFundMe page to help with bills related to getting their daughter back. They say they have been falsely charged with bogus accusations and never been arrested. They also note that they have video evidence to back up all their claims. Some of that video is above.

Below is a heart breaking video of little Sofia left in a dark room screaming frantically. Notice how she stops crying immediately when Suzy picks her up.

Please share this story and help this family get back their daughter before she becomes a statistic like so many other children ripped from the caring arms of parents by the state.