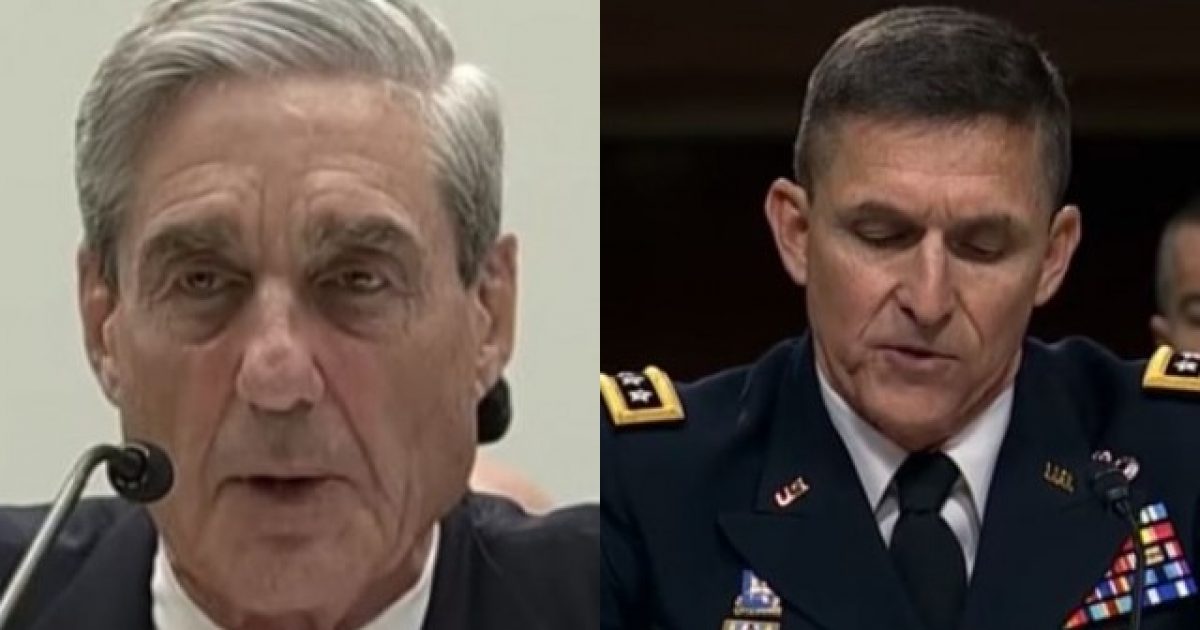 Mueller’s Corrupt Prosecutors Attempted To Get Michael Flynn To Cop To A Lie, Then Labeled Him A ‘Co-Conspirator’ To Bogus Charge

Some of the corrupt, Democrat-donor prosecutors working with former special counsel Robert Mueller tried to get retired three-star Army general and former Trump National Security Adviser Michael Flynn to plead guilty to a lie, and when he refused attempted to label him a co-conspirator in a bogus charge.

U.S. District Judge Anthony Trenga in the Eastern District of Virginia slammed the Department of Justice’s request to designate former National Security Advisor Michael T. Flynn a ‘coconspirator’ in the ongoing case it has against his former business partner after the government stated on numerous occasions that Flynn was a cooperating witness.

Trenga issued the 38-page scathing opinion in the late afternoon Tuesday that the “United States at this point has not presented or proffered evidence to sufficient to establish by a preponderance of the evidence a conspiracy for the purposes of admitting against the Defendant the hearsay statements of alleged co-conspirators.”

“Notably absent from the government’s proffer is any evidence from Michael Flynn, who, as discussed above, has admitted that he made certain false statements in the FARA filing that was the object of one of the charged conspiracy and has entered into a cooperation agreement with the United States that extends to this prosecution,” Trenga added.

At the time we thought this seems like a powerful reaction to what admittedly, this late in the game, appeared to be an odd development: Why, after nearly 18 months after Flynn pleaded guilty to one count of lying to FBI agents (itself very suspect given what we know about one of the agents — Peter Strzok — and the “Spygate” operation) would the DoJ attempt to charge Flynn with something new?

Turns out that the allegation stemmed from Flynn’s flat-out refusal to cop to a bogus charge demanded of him by Robert Mueller’s politically compromised prosecutors.

Prosecutors from the team of special counsel Robert Mueller wanted Lt. Gen. Michael Flynn to testify to something that isn’t true, Flynn’s lawyers said. When he refused, they tried to label him a co-conspirator in a case where they previously said he was only a witness. …

Flynn…is expected to face a light sentence after pleading guilty to lying to the FBI and after extensively cooperating with the Mueller team and the Justice Department. He was also expected to testify on another case of making false statements on foreign lobbying registration forms.

In his November 2017 guilty plea, he said that the forms submitted by lawyers for his now-defunct lobbying company, Flynn Intel Group (FIG), contained false and misleading statements. The prosecutors, however, recently asked him to testify that he signed those forms knowing about the falsities and intending for them.

You know what else makes perfect sense? The fact that Flynn hired former federal prosecutor Sydney Powell as one of his new attorneys.

Powell, you may recall, is the author of the highly revealing book, “Licensed to Lie: Exposing Corruption in the Department of Justice.” In her book, was particularly critical of top Mueller deputy Andrew Weissmann, who — along with some others in the Justice Department — has repeatedly hidden exculpatory and exonerating evidence against defendants (Merrill Lynch and Enron, most notably) so they could be falsely prosecuted.

Writing in The Daily Caller in March, Powell noted:

Weissmann has a pattern of wrecking lives with his prosecutorial terrorist tactics, then slinking away when someone catches on to his tactics and before the reversals start rolling in. …

Weissmann’s modus operandi is to terrorize and humiliate his targets. That’s why Mueller brought him on the squad. If that’s what one thinks a federal prosecutor is supposed to be, then Weissmann is your man.

And he is obviously Mueller’s, as “Bob” has been protecting and promoting him for at least 20 years, despite the misconduct documented heavily in other Enron cases, my book, and in the grievance we filed with the New York Bar — which was swept under the rug by the DOJ’s “Office of Professional Responsibility” — while Weissmann was Mueller’s general counsel at the FBI.

As for the new ‘co-conspirator’ allegation, Powell and the rest of Flynn’s legal team pushed back in court, claiming that he had no idea when he signed the forms a few years ago they contained fraudulent information. “Mr. Flynn cannot give that testimony because it is not true,” Flynn’s recently hired lawyers, Jesse Binnall, Powell, and William Hodes, said in a July 8 court filing.

At the time of signing the forms, in March 2017, Flynn only read the cover letter and didn’t know about or intend for anything false in them, they said.

“Mr. Flynn trusted his former counsel who held themselves out as experts in this area of law,” the filing stated.

That DoJ and Mueller’s team have attempted to frame yet another innocent defendant should not be surprising, given their record and incredible bias — which is why Mueller picked them to begin with.

What should surprise us, however, is that these people who have the power of the federal government behind them have been able to get away with it for so long.

Mueller ruined Flynn’s life- for nothing…