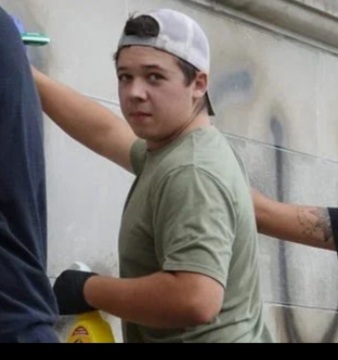 Only the fascist left domestit terrorist supporting democrat controlled propaganda fake news would stoop so low to attack a law abiding 17 year old American patriot. Instead of being truthful and saying Kyle Rittenhouse defended himself, they chose to blow smoke up everyone on this planet’s a$%’s.

“The teenager with the long gun scuffled with people near a car dealership and opened fire, allegedly killing two people and wounding a third, a criminal complaint says. Even as police and emergency vehicles raced to the scene and chaotic videos of the fatal encounter appeared on social media, the armed suspect walked past a group of officers unnoticed. He was arrested 30 miles awayin Antioch, Illinois.”

Rittenhouse was 1 of many volunteers that were cleared by law enforcement and were protecting businesses from being destoyed by democrat supported fascists left domestic terrorist Black Lives Matter(BLM)/Antifa, Muslim Extremists and foreign nationals that have entered the country illegally and are working with BLM causing discourse, attacking Americans and trying to influence our elections.

The terrorist next move was to set the car lot on fire where Rittenhouse was standing guard.

Rittonhouse goes over to where Rosenbaum is laying and offers help. He calls the police.

A person then decides to use his shirt instead of the first aid kit Rittenhouse was carrying. The same person tells Rittenhouse to go.away.

Rittenhouse starts making his way to the police line and a mob of domestic terrorist start chasing him. He trips an falls. While on the ground a unidentified terrorist runs up and kicks him in the head. While still on the ground, he gets hit in the head with a skateboard carried by convicted felon and domestic terrorist, 26 year old, Anthony Huber. Rittenhouse takes the skateboard hit and shoots Huber.

Gaige Grosskreutz, armed with a handgun goes after Rittenhouse. Grosskreutz raises his gun and Rittenhoust shoots him in the arm.

Rittenhouse makes his way to the police where he turns himself in.

Currently charges have been filed on Rittenhouse which if convicted, could give him a life sentence.

Charges were filed before any sort of criminal investigation took place. At the time there wasn’t a crime scene investigation, no ballistic data, meaning they don’t know if Rittenhouse was the only shooter. Video clearly shows he shot in self defense.

Besides the fact that these were convicted felons attacking a minor, they were terrorist in the act of committing crimes. They had already helped burn and destroy other buildings in the city.

CNN and other fake news outlets are lying about what really happened.

So you can decide for yourself, I found as many videos of that night that I could find. I placed them in order creating a visual timeline of events. Keep in mind that these are the actual videos captured by reporters on the scene. I haven’t blurred anything out so you will be seeing shooting, blood and bodies. That’s your warning.

This is for educational purposes only.

Rittenhouse doesn’t look like the mass shooter that some media outlets describe him.

Really makes you wonder why they are lying.

The person that interviewed Rittenhouse was 10 feet away from Rosenbaum when he got shot. He also helped carry Rosenbaum to the car. He was also at the hospital with Rosenbaum. You would think that being a reporter he would have some video from the hospital. They covered every other part of the event. This is the reporter,

This is a short video of the day after.

Is Rittenhouse a Patriot or not? I going with Patriot.