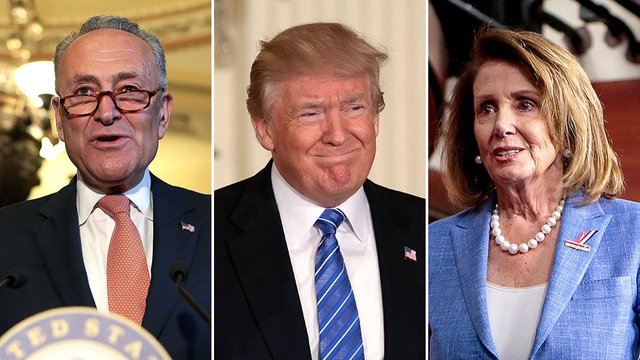 U.S. Senate member Charles Schumer, (D-NY) refuses to defend America. He refuses to take his oath of office seriously. He refuses to allow a wall to be built across the Mexican border to stop drug trafficking at $120 billion annually, year after year. He refuses to stop 500,000 illegal aliens annually who jump our borders. He won’t stop and hasn’t stopped the 300,000 illegal pregnant mothers annually who birth their child on our soil and then force us to pay for their welfare for the next 18 years.

U.S. House member Nancy Pelosi, (D-CA), calls illegal aliens, “These immigrants are the future of America.” She doesn’t connect that they are illegal alien border jumpers who broke our laws and violate our Constitution every single day of their existence in America. She doesn’t care that they work off the books, pay no taxes and send cash transfers to the tune of $70 billion annually back to their home countries, thus draining our finances and adding to the $21 trillion national debt.

Those two culprits don’t stand alone. Look at Mitch McConnel, (R-KY), speaker of the Senate, does nothing to protect America’s borders in his ‘forever’ corrupt criminal career as a U.S. senator. Same with all 100 senators who do nothing to stop the invasion of our borders. Same with Speaker of the House Paul Ryan, (R-WI), who did nothing during his career to stop the illegal invasion.

Thus, those people shut down the U.S. government to stop Trump’s wall that would cost a fraction of what it costs to support over 22 million illegal aliens inside our country, and growing by 500,000 annually according to Dr. Steven Camarota of www.cis.org .

We pay an astounding estimated $296 billion annually across 15 federal agencies to feed, house, medically care for, education and births of illegal aliens. It never ends. It continues year after year.

And yet, these nitwits in Congress quibble over $5 billion or $20 billion for the wall, when we pay $296 billion annually to support those 22 million illegal aliens. (Source: Yale Research study on number of illegal aliens within the USA, September 2018.)

You must ask the question: who remains in charge of the insane asylum titled: The United States Congress? What are those 535 people doing daily for us, the voters and citizens of this country? Answer: jack squat.

Question: why did you vote your democratic or republican House member or senator back into office when all of them refuse to stop the invasion of our borders? That must be the question of the century. Why would a country allow itself to be invaded, and in fact, pay for the invaders, but not pay for a wall to stop the invaders?

Sometimes I wonder if the citizens of this country simply grow tired of their freedoms, their citizenship, their language, their culture and their way of life. They become apathetic, lazy and complacent. They don’t vote, and they don’t engage.

Guess what? The United States of America gallops along on the “failure” path like a horse possessed of loco weed. The horse gallops out of his mind. The people of America race along with no concern for the future, no understanding of what another 140 million more immigrants mean to this civilization and no comprehension of what their children face.

It beats the hell out of me how our elected leaders can’t see what’s coming, but in fact, aid and abet the destruction of our “way of life” our environment and our culture. And, we sit by and watch it happen.

The Europeans commit themselves to the same future of destroyed cultures, overpopulation, living beyond carrying capacity and religious conflict that will degrade their rule of law and their cultures into mongrel multiculturalistic societies. And, we already see their descending toward the gates of hell.

Last week, a Moslem terrorist shot people up in Strasburg, Germany. A Moslem in Morocco beheaded two Swedish girls who were stupid enough to go hiking in the hills. He videotaped cutting their heads off as they screamed for their lives. I winced at the video.

We’ve got 35 documented Muslim terrorist training camps from New York to California. What’s being done about them? We’re actually supporting them with food stamps and welfare on our tax dollars.

If you thought 2018 featured enough craziness in Europe, Canada and America—-you ain’t seen nothing yet.