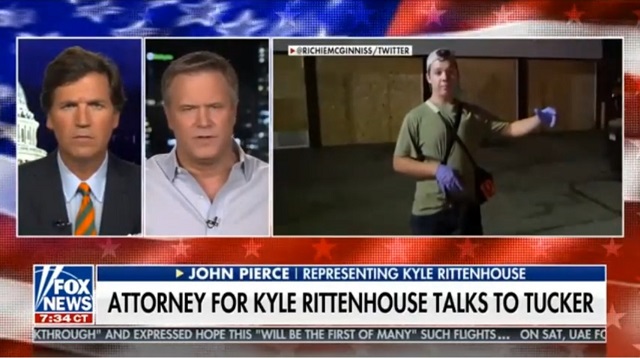 Kyle Rittenhouse’s attorney, John Pierce, appeared Monday night on Tucker Carlson Tonight to present his case that the shooting in Kenosha last week was a clear-cut instance of self-defense.

“This is 100 percent self-defense,” Pierce said.

Pierce also did a radio interview with Breitbart News Sunday:

“Kyle was not there looking for a fight,” Pierce remarked. “He is a great kid who serves as a community lifeguard in Kenosha. He was there to protect businesses that were being destroyed and burned to the ground. He was also there to provide medical aid to protesters and others who might be wounded. He actually took a first aid kit there to help wounded protesters, which he did repeatedly.”

Pierce continued, “Of course, Kenosha was burning, and he took a rifle so that he could protect himself if he needed to — and to protect property and to protect others. This is one hundred percent self-defense. It’s not even close. Kyle was actually attempting to put out a dumpster fire that the rioters had set.”

Pierce went on, “The rioters got enraged by that. Kyle actually attempted to retreat. He was chased down by attackers that were repeatedly stating that he should be killed. They came at him lightning-fast and attempted to begin striking him and wrestling with this rifle with an intent to kill. He had no choice but to fire his weapon and protect himself.”

Pierce released a statement on Friday laying out their case for self-defense where he touched on many of the points he made in this interview and hit many more.

President Trump also weighed in on the case during a press conference on Monday, saying Rittenhouse was “trying to get away” from a mob before he tripped and fell and was “violently attacked” and he “probably would have been killed” had he not defended himself.

President Trump is asked to comment on Kyle Rittenhouse:

"He was trying to get away from them and he fell and then they violently attacked him… It's something that we're looking at right now." pic.twitter.com/mxw9b6HwHA