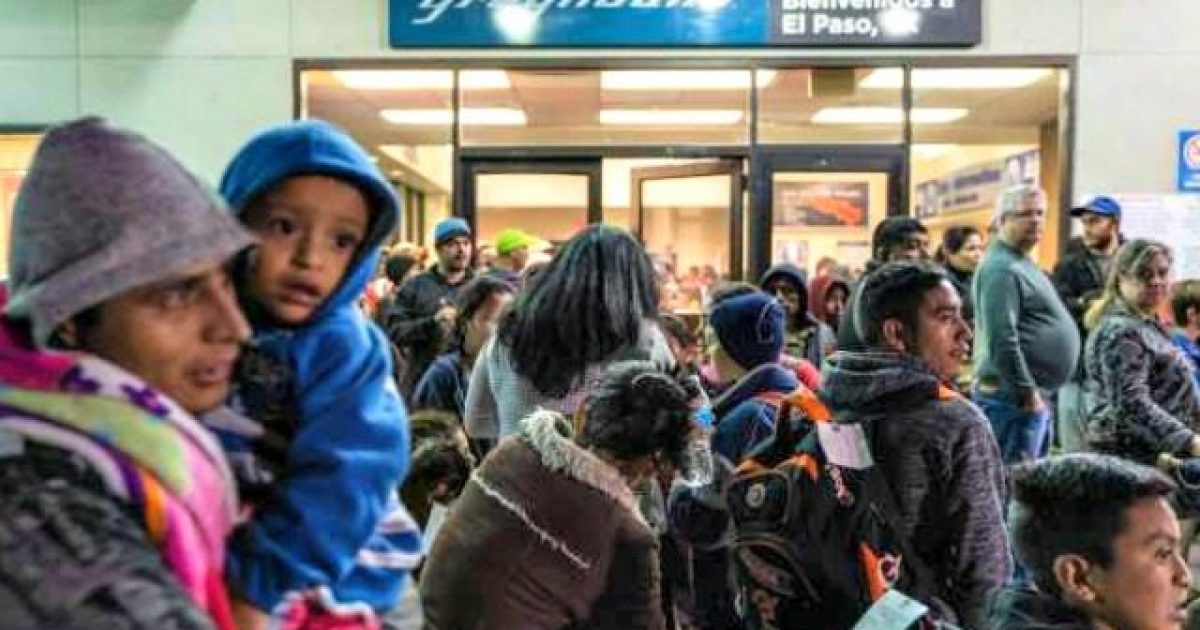 As we’ve reported before, the Trump administration talks tough on illegal immigration, but what is actually going on rivals the impotence and downright criminal actions against the people that the administration under the usurper Barack Hussein Obama Soetoro Sobarkah did in releasing illegal aliens, some of them convicted felons, into the US population. in just the past week, the administration released 5,500 and in the past 5 months, they have released nearly 200,000 illegal aliens into American cities.

The information was obtained through federal data by Breitbart, certainly a supporting outlet of President Trump.

According to John Binder:

The catch and release process often entails federal immigration officials busing border crossers into nearby border cities — as well as flying them into the interior of the country — and dropping them off with the hope they show up for their immigration and asylum hearings. The overwhelming majority of border crossers and illegal aliens are never deported from the country once they are released into the U.S.

Today, there are anywhere between 11 and 22 million illegal aliens living across the country — the majority of which are concentrated in states like California, New York, Florida, Texas, and Illinois.

Roughly 800 border crossers and illegal aliens were dropped off in San Diego, California in the last week.

But that’s hardly all there is to tell.

At the end of May, during a hearing before the Senate Homeland Security Committee, Acting Department of Homeland Security (DHS) Secretary Kevin McAleenan said DHS is releasing “100 percent” of adult border crossers into the interior of the country who arrive with children at the southern border, including those who are not even asking for asylum.

McAleenan confirmed the mass catch and release effort in an exchange with Sen. Rob Portman (R-OH):

PORTMAN: So, what percent of those families who come up to the border and, again, approach your officer, ask for asylum, are being released into the community within days?

MCALEENAN: Yeah, and they’re not necessarily asking for asylum. They–they don’t–they don’t have to. They can go into an immigration proceeding and not have to present that case for potentially years.

PORTMAN: And when they go into the community, you say can take a while. It’s over two years in Ohio, you should know, before we can have a court hearing. So, it’s over a two-year period. What’s the average around the country, do you know?

MCALEENAN: The average is around two years, and in some jurisdictions even longer.

PORTMAN: And during that time period, can those individuals work?

MCALEENAN: Yes, by and large, although we’re–we’re looking at–at tightening the–the rules so that there is not an opportunity to take advantage of the system.

PORTMAN: So, they have a work permit. My understanding is they don’t get the work permit immediately but after a certain period of time. Is it six weeks?

PORTMAN: And those individuals then … are going to work. So, if you are a trafficker, what you’re telling people is, one, if you come to the border … and seek asylum, or even if you’re coming to the border … and seeking an immigration hearing, you’ll be released into the community for a couple of years at least before your hearing, and you’ll have the ability to work. And with the wage differential of, you know, being able to make 10 times as much or sometimes as much as 20 times as much in the United States…

Binder went on to point out:

Former Kansas Secretary of State Kris Kobach has exclusively detailed at Breitbart News three executive actions the Trump administration and DHS officials could take to immediately end catch and release — including creating additional detention space where immigration court hearings can be heard quickly. Kobach has also warned that wage hikes for America’s blue-collar and working class will not continue while illegal immigration levels are soaring.

At curresnt catch and release rates, by the end of the year, DHS will have freed more than 470,000 border crossers and illegal aliens into American communities — in addition to the projected half a million illegal aliens who are expected to successfully cross the U.S.-Mexico border this year, undetected by federal officials.

Well, at least Kobach gets the impact it will have on American workers, but granting work permits to illegals? What in the world? This is a far cry from what you are being told, isn’t it?

But hey, don’t worry, the Trump administration has it in hand, usurping the Constitution to take authority granted to the Congress to impose tariffs on Mexicoinstead of calling on Congress to form and call up the militia and call it up to do its constitutional duty of repelling invasions and stopping these people before they cross the border.

But no one cares about the Constitution anymore. Both parties wave their political jerseys around as though one bit of lawlessness isn’t as bad as the other, or one failure to act constitutionally is better than the other.

This is merely a repeat of things we saw during the Obama administration and those who complained about that then, but attempt to justify this now under Trump are mere hypocrites.