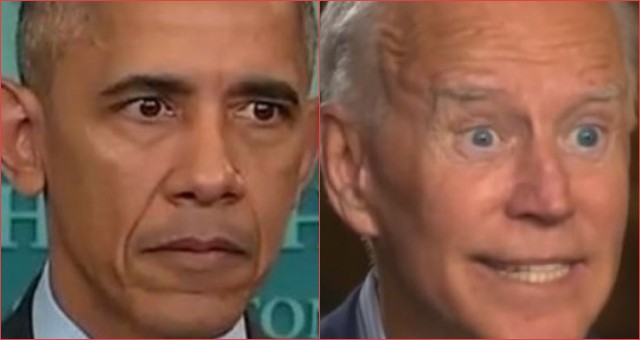 (TNS) Barack Obama and Joe Biden have claimed that theirs was a “scandal-free” administration, despite oodles of evidence to the contrary.

Just because the Garbage Party’s propagandists in the Mainstream media refused to investigate it doesn’t mean that there were no Obama-Biden scandals, of course. That’s like saying if you covered up your ears while your friends discussed a crime they carried out, it didn’t really happen.

One of the Obama administration’s biggest emerging scandals was the way in which the former president and vice president abused Ukraine. That includes the 2016 Clinton campaign and the Democratic National Committee.

We’ve known for nearly three years that Clinton & Co. were mining Ukrainian officials for dirt on then-GOP presidential candidate and nominee Donald Trump because POLITICO told us in January 2017, days before Trump was inaugurated:

Ukrainian government officials tried to help Hillary Clinton and undermine Trump by publicly questioning his fitness for office. They also disseminated documents implicating a top Trump aide in corruption and suggested they were investigating the matter, only to back away after the election. And they helped Clinton’s allies research damaging information on Trump and his advisers, a Politico investigation found.

Biden, of course, bragged about withholding $1 billion from Ukraine unless that country fired a prosecutor looking into corruption involving an energy company that was employing his son, Hunter, for tens of thousands of dollars per month.

And he did it on video.

Americans fed up with these people continually getting away with having destroyed our institutions and then blame Trump for doing what they have done might feel a little better following a report from investigative journalist Paul Sperry.

He tweeted Monday that no fewer than three Senate committees are investigating Obama-Biden solicitation of election interference from Ukraine.

“BREAKING: No fewer than 3 Senate committees are now formally investigating Obama-Biden solicitation of Ukrainian interference in the 2016 election, as well as Biden family corruption in Ukraine. Investigators seek records from the DOJ, FBI, DOS, DOT and the U.S. National Archives,” he wrote.

Trump and his supporters have long suspected that Russia did not hack the DNC’s computers.

Axios reported this as a fact as early as Monday, in an attempt to disparage Sen. John Kennedy, who mentioned on Fox News Sunday that Ukraine may have interfered in the 2016 election (the POLITICO report appears to have already verified this).

As a “Reality Check” to his story, Axios correspondent Jacob Knutson claimed, “The FBI received a digital image of the servers — a complete record of what was on the unwieldy farm of physical computers. Physically obtaining the servers would provide no new information.”

Oh, really? Because even former FBI Director James Comey begged to differ, claiming in January 2017 the DNC never allowed the FBI to examine them.

And in February, we reported that an analysis by intelligence experts William Binney, a former high-ranking NSA official-turned-whistleblower, and Larry Johnson, a former CIA analyst and State Department counterterrorism expert, concluded that that rather than DNC servers being hacked, “existing evidence supports an alternative explanation — the files taken from the DNC between 23 and 25 May and were copied onto a file storage device, such as a thumb drive.”

The former intelligence experts said that if Russian operatives had actually penetrated DNC computers the NSA would have evidence of that because “the technical systems” capable of gathering it “have been in place since 2002.”

In the months since the alleged hack, the NSA had ample opportunity to make available the “irrefutable proof” that a Russian hack had occurred, even though the DNC refused to allow the FBI’s cybersecurity experts access to their servers. But the agency has never done so — and trust us, if the evidence had existed, some deep stater would have leaked it by now to hurt President Trump.