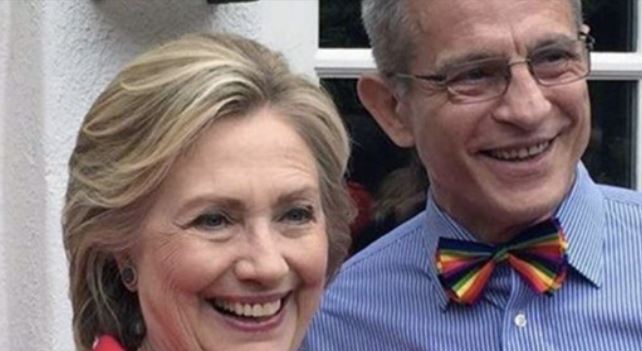 “The new amendment is about making sure no box is left unchecked when it comes to all of the crimes that Ed Buck has committed,” [said] Jasmyne Cannick, an advocate for the family of 26-year-old Gemmel Moore, who was found dead of a drug overdose in Buck’s home in 2017.

OPINION – Elder Patriot – NBC4 reported that according to the amendment, Buck “knowingly utilized interstate commerce for the purpose of engaging in commercial sex acts.”

Buck is said to have supplied an airline ticket to Moore who flew from Texas to Los Angeles where he died inside Buck’s West Hollywood apartment.

Missing from the CBSLA report is any mention of the hundreds of thousands of dollars that Buck has given exclusively to Democrat candidates, including Hillary Clinton. Those donations are documented here and here.

That omission is odd considering the media’s current obsession with trying to link President Trump to alleged pedophile and sex trafficker Jeffrey Epstein, don’t ya think?

Especially since we know that Epstein was a major Democratic donor who is said to have “donated” $4 Million and helped Bill Clinton set up his infamous family foundation.

Here is our report from January of this year after a second black man was found dead at Buck’s apartment:

The L.A. County Coroner’s office ruled Moore’s [death] to be the result of an overdose of methamphetamine. A coroner’s report said drug paraphernalia was found in the home, along with sex toys and clear plastic bags containing what was suspected to be methamphetamine.

The L.A. County District Attorney’s Office declined to prosecute Buck saying the evidence is “insufficient to prove beyond a reasonable doubt that (Buck) is responsible for the death of Gemmel Moore.

Funny that. I thought that was for a jury to decide.

Jasmyne Cannick is an independent investigative reporter who has studied the facts surrounding the deaths of both of the black males found dead at Buck’s apartment.

What she uncovered suggests what could only be explained as a highly politicized decision made to exonerate Buck.

Buck then goes on to say that he didn’t see Timothy [the second victim] take any drugs and that they didn’t have sex.

That is contradicted by what Cannick says she discovered next:

Timothy Dean was wearing plastic “cock rings” on his penis at the time of his death.

Every single man I interviewed about Ed Buck discussed in detail his fetish with white underwear but more importantly–their Black bodies in that white underwear and his use of cock rings and other things.

As for the drugs that his victim didn’t take:

The sheriff investigator documented that he found, “two short pieces of thick clear plastic tubing” each approximately two feet long and that one appeared to contain a “white powdery substance.” The refrigerator contained a syringe containing a “clear liquid, two clear bottles with the labels painted over with blue paint -found to be labeled Naloxone, one bottle labeled Caverject, and a box labeled Alprostadil/Papaverine with a bottle containing a clear liquid.” The investigator goes on to document seeing a glass pipe on the dining room table and another on the stovetop and two more empty syringes were found on a desk in another room.

Both Caverject and Alprostadil/Papaverine produce erections that last between 30 and 60 minutes and are used to treat impotence.

The facts surrounding Dean’s death do not make a case against Buck in Gemmel Moore’s death, but coupled with the coroner’s report on Moore, Cannick says they paint a picture of a rich sexual pervert who plies his victims with drugs before engaging in sex with them..

According to the report, a coroner’s investigator found the following items in Buck’s two-bedroom apartment: 24 syringes with brown residue, five glass pipes with white residue and burn marks, a plastic straw with possible white residue, clear plastic bags with white powdery residue and a clear plastic bag with a “piece of crystal-like substance.”

Unless I’m wrong, it’s a rare down-on-his-luck drug user who walks around with 24 syringes with brown residue and five glass pipes.

And then there’s this. According to Cannick, Gemmel Moore wrote: “Ed Buck is the one to thank. He gave me my first injection of chrystal [sic] meth.

Coincidentally, drugs and perverse sexual acts are all part of the Democratic platform.