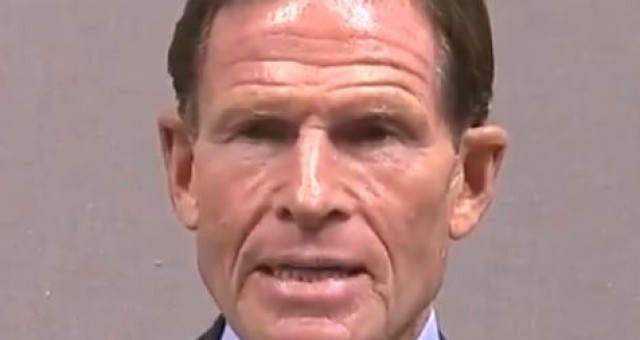 (TNS) Sen. Richard Blumenthal is one of the worst kinds of liars: He claimed he served in Vietnam when he got five deferments to specifically avoid serving in Vietnam, and for that, he’ll always be nothing but garbage in our eyes.

Because President Trump bravely and correctly (and regularly) calls out the Washington media for the fake news factories they have become, lying about him and his administration daily like it was their jobs, the Vietnam poser has fabricated a ‘culture of violence’ against journalists in America that simply doesn’t exist.

In fact, as the Twitter post below notes properly, it’s the president’s supporters who are regularly targeted for violence — and yes, one of them happens to be a journalist, Andy Ngo.

Rather, Sen. Blumenthal’s sole objective is to shut down any criticism of Democrats currently pretending to be journalists while, of course, ingratiating himself to those prostitutes of fabrication.

This is what the Garbage Party does: They invent an issue or a problem then ‘recommend’ a government solution to the problem they invented, and always with the objective of denying Americans more of their freedom.

Trump supporters are physically attacked daily. Your proposal is dangerous and based off of feelings. You can’t strip away opinions. We may hate CNN for example but we don’t and wouldn’t physically abuse them. Free Speech is just that. Fake news is just ‘fake news.’ Grow up! https://t.co/rRkRRkEdex

Oddly, President Trump gives the press more access to him that than Obama ever did. What else is different? Obama spied on journalists, investigated them, and tried to prosecute them for leaking. Trump hasn’t done a single one of those things.

But here’s the great pretender, Tricky Dick Blumenthal, claiming that anyone who criticizes a journalist is essentially ‘threatening’ that journalist and, thus, is committing a crime.

This legislation isn’t going anywhere because the GOP-controlled Senate won’t pass it, Trump won’t sign it, and there’s that pesky First Amendment. So really, all this moron is doing is virtue signaling to his press minions.

But given the fact that he was already one of the lowest forms of life — a MilVet poser — we’re moved to ‘encourage’ voters in the state of Connecticut to do better than this Garbage Party loser.