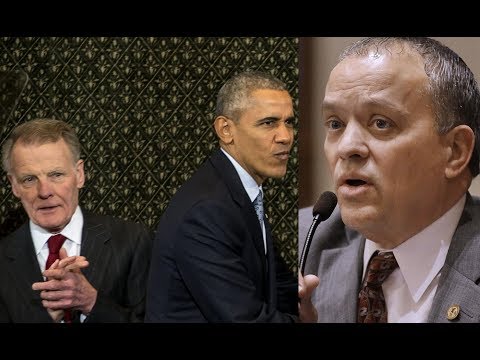 Two breaking stories involving Democrat politicians come to us from Chicago and Ohio.

CBS Chicago is reporting that Illinois State Rep. Luis Arroyo has been arrested for bribery:

CHICAGO (CBS) — Another powerful Springfield Democrat has been targeted by the feds – this time, agents arrested Rep. Luis Arroyo (D-Chicago) on accusations of bribing a state senator.

There was just one problem – that state senator was working as an informant.

Arroyo, 65, is charged with one count of federal program bribery, according to a criminal complaint and affidavit filed in U.S. District Court in Chicago. Arroyo made an initial court appearance before U.S. Magistrate Judge Maria Valdez and was ordered released on a personal recognizance bond.

Also in the News on Tuesday were three people charged in a fraud scandal, including a former Democrat Mayor of Trotwood, Ohio.

Federal law enforcement officials have unsealed additional fraud charges in an ongoing public corruption investigation. The first wave of charges in the far-reaching probe were announced back in April.

On Tuesday, the Federal Bureau of Investigation and the United States Attorney’s office charged three people:

Democrats aren’t the only corrupt politicians in America, but they surely seem to get more headlines than their colleagues from across the aisle.

To be fair, Republicans have some too…

The people deserve justice with all of these swamp creatures, Democrat or Republican, and hopefully they will get it in these two latest cases.

There sure seems to be a lot of swamp draining in the news.