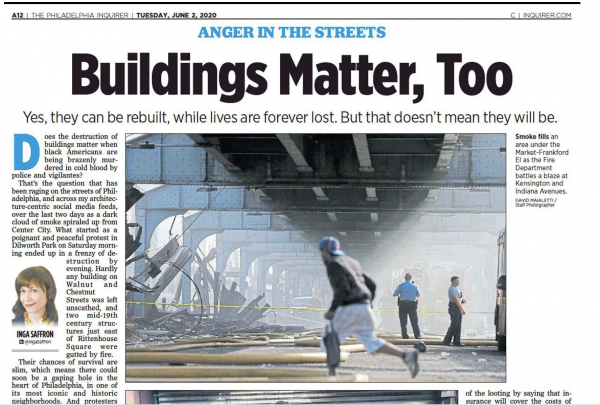 The Woke Wars of 2020 has another casualty: the top editor of the Philadelphia Inquirer. He just resigned.

Why? [Philadelphia Inquirer Apologizes for ‘Buildings Matters, Too’ Headline: The paper seemingly equated the loss of property and the loss of Black American lives, The Wrap, June 4, 2020]:

The Philadelphia Inquirer issued an apology to its readers Wednesday night over a headline that caused a stir on publication Tuesday: “Buildings Matter, Too.”

The headline was a reference to the destruction caused by the unrest that has broken out across America since the Memorial Day killing of unarmed black man George Floyd by Minneapolis police. It was deemed “unacceptable,” according to executive editor Stan Wischnowski, editor Gabriel Escobar and managing editor Patrick Kerkstra, who bylined the apology as a unit.

“The Philadelphia Inquirer published a headline in Tuesday’s edition that was deeply offensive. We should not have printed it. We’re sorry, and regret that we did. We also know that an apology on its own is not sufficient,” the editors wrote. “The headline accompanied a story on the future of Philadelphia’s buildings and civic infrastructure in the aftermath of this week’s protests. The headline offensively riffed on the Black Lives Matter movement, and suggested an equivalence between the loss of buildings and the lives of black Americans. That is unacceptable.”

The editors went on to explain the process by which headlines are applied to stories. In this case, they said, the story was really about the future of infrastructure in their city post-unrest. The paper’s editing process involves the story being submitted for review by copy editors, then given a headline by those copy editors, not someone directly involved in the creation of the piece.

“This incident makes clear that changes are needed, and we are committing to start immediately,” vowed the apology.

They finished their apology by directing it not only at readers and the community the paper serves, but employees of the paper “whose work selling advertising, printing the paper and developing Inquirer.com enables” the journalism it provides. Then, they apologized directly to the journalists at the Inquirer, especially those of color.

Burning/looting/destroying private and commercial property is totally, 100 percent okay if it is done in the memory of a black career criminal.

Truth, logic and reason must kneel before a mob, with historic buildings, department stores, and commercial/private property all fair game for ritualistic conflagrations during spontaneous expressions of Black Lives Matter.

So does Western Civilization, too.