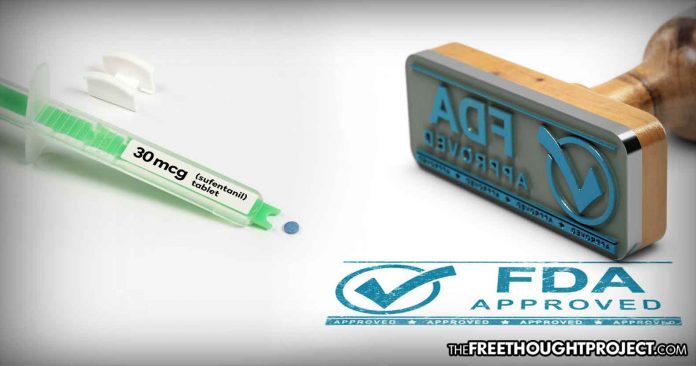 In a massive move to expose the Food and Drug Administration’s loyalty to big pharma, a top official from within the agency has come forward with damning claims. The FDA has succumbed to Big Pharma’s influence and is approving deadly drugs to benefit their industry backers.

Dr. Raeford Brown, who is chair of the FDA’s committee to review various opioid based drugs before approving them, blew the whistle in an interview with the Guardian this week.

Brown told the Guardian that there is a “war” inside the FDA in regard to approving opioids. Brown said the agency has “failed to learn the lessons” of the recent epidemic which now claims tens of thousands of lives each year—around 150 deaths every single day.

As TFTP reported in November, the FDA sided with its Anesthetic and Analgesic Advisory Panel, which voted 10-3 to approve Dsuvia, a sublingual tablet form of sufentanil, against the recommendation of its chairman.

Brown, who was one of the “no” votes on the panel, called Dsuvia a “terrible drug” and noted how the entire approval process was manipulated.

Adding to the ominous nature of the recent approval is the fact that Dsuvia’s development was partially funded by the Department of Defense. Part of the problem critics of the new drug claim is that it is in pill form which will undoubtedly lead to abuse and black market sales. However, that’s exactly why the DoD wants it so they can administer it on the battlefield.

The company behind the drug, AcelRx projects $1.1 billion in annual sales on Dsuvia alone, showing just how large their reach will be.

“They should stop considering any new opioid evaluation,” Brown told the Guardian. “For every day and every week and every month that the FDA don’t do the right thing, people drop dead on the streets. What they do has a direct impact on the mortality rate from opioids in this country.”

Brown explained to the Guardian that he has lost faith in the agency’s ability to protect public health and says they are more interested in bowing down to the ones pulling their strings in the world of Big Pharma. Brown went so far as to describe the FDA’s loyalty to the pharmaceutical industry as potentially criminal.

“I think that the FDA has learned nothing. The modus operandi of the agency is that they talk a good game and then nothing happens. Working directly with the agency for the last five years, as I sit and listen to them in meetings, all I can think about is the clock ticking and how many people are dying every moment that they’re not doing anything,” he said. “The lack of insight that continues to be exhibited by the agency is in many ways a willful blindness that borders on the criminal.”

Criminal indeed. As TFTP has reported, members of the Sackler family, who’ve made billions pushing their deadly OxyContin drug on the masses are arguably responsible for more deaths than any Mexican drug cartel. Instead of being hunted down at their plush mansions by DEA agents, they are rubbing elbows with members of Congress.

The state of Massachusetts has had enough however, and officially accused the company, Purdue Pharma, and its heirs of spinning a “web of illegal deceit” which fueled the deadly crisis in which America currently finds itself.

Just this week, Massachusetts attorney general Maura Healey accused the Sackler family of engineering the entire crisis. She sat down with “CBS This Morning” on Thursday and alleged that the Sackler family hired “hundreds of workers to carry out their wishes” – pushing doctors to get “more patients on opioids, at higher doses, for longer, than ever before” all while paying “themselves billions of dollars.”

The Sackler family is only partially complicit, however, as their drugs were approved and pushed by the entire system. The revolving door of big pharma employees at the FDA is designed—not to hire experts to protect the public from dangerous drugs—but instead to streamline and protect revenue generation for a corrupt industry.

We need only look at the FDA’s attack on kratom to prove this notion. As the FDA continues to approve dangerous opioid products that are currently killing 150 people a day, the commissioner of the FDA, Scott Gottlieb has made it his personal mission to demonize and attempt to ban kratom.

Because kratom has similar effects to opioids—and also happen to be vastly safer and milder—the FDA declared it to be a dangerous opioid drug.

Kratom is not an opioid. Opiates are derived from poppies and opioids are man-made opiates. Both opiates and opioids depress the respiratory system and are deadly in this respect as related to overdoses. Kratom is in the coffee family and it does not have any properties of opioid-induced respiratory depression. This is why millions of people take kratom every day and none of them die.

But these facts have no bearing on those who wish to keep their monopoly on pain treatment as well as profit from banning this highly beneficial plant.

Last year, referring to naturally wild growing kratom plant as a “street drug,” Gottlieb claimed that he and the FDA are acting “in the interest of protecting public health,” and will therefore attack a plant used by millions to enrich the police state, foster the drug war, and ensure a lifetime of profit for the pharmaceutical industry which has addicted the nation to its dangerous and extremely deadly synthetic opioids. This is now coming to a head as the crackdown on kratom has expanded outside of the FDA into other government agencies.

In the last few months, proving their loyalty to the dangerous opioid giants—responsible for tens of thousands of deaths a year—the Department of Health and Human Services, along with multiple state boards of pharmacy, have moved to classify the kratom plant as a schedule 1 drug. This movement against the plant by Big Pharma loyalists has been increasing and got exposed in November in Ohio as police began raiding stores in which kratom is sold.

In October, the Ohio Board of Pharmacy became the latest group to jump on the ‘ban kratom bandwagon’ and classified kratom as a schedule 1 drug. This followed a move by the FDA—who falsely declared kratom to be an opioid earlier this year.

Over the Thanksgiving break, police in Ohio carried out a series of raids on stores who were selling kratom. Despite the fact that the plant is currently legal in the state, SWAT teams raided these places as if they were human traffickers or meth dealers.

“They had like 10 police officers, the chief of police, it was crazy,” one store owner Jack Smith told HuffPost.

Hopefully, kratom remains legal as it has shown to be massively beneficial in curbing the opioid addictions of so many people. I can speak from experience when I say that I have personally witnessed friends give up their dangerous opioid addictions by using kratom instead.

Below is a screen shot from my phone showing one of many success stories. An ‘LT’, for those who don’t know is short for Lortab, an opioid based pain reliever that is commonly prescribed. Although it is usually a low dosage, those who get addicted to them often overdose by taking multiple pills. It’s because of text messages like the one above that the FDA is trying to crack down on kratom. It is a direct threat to their puppet masters in the industry and a far safer alternative to the ever-expanding list of opioids they keep approving.

Hopefully, these comments by Dr. Brown will materialize into something larger than just an interview and the true intentions of the FDA will be aired for all to see.