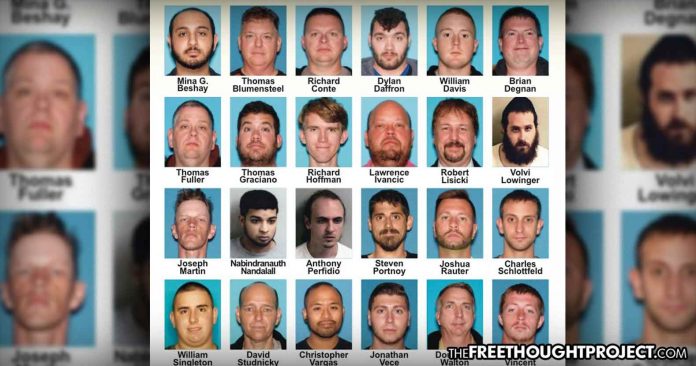 Toms River, NJ — As TFTP reported earlier this month, Howell police Sgt. Richard Conte, the head of Monmouth County’s emergency response team, was arrested and charged with attempting to lure a child into a motor vehicle. The veteran cop, in a supervisory position, has since been suspended without pay and the state Attorney General has since released the disturbing details of the case.

Conte was busted earlier this month in a state-wide sting operation setup to catch child predators. This pillar of the community and “protector of the innocent” — whose base salary tops $140,000 — was caught attempting to lure who he thought was a young female child for sex.

Conte, 47, has since been locked up and charged with second-degree attempted luring or enticing of a child and is being held in the Ocean County jail in Toms River.

On Tuesday, Attorney General Gurbir S. Grewal gave the details to the public during a press conference. They are nothing short of disgusting.

The sting involved inviting the would-be child predators to a home where they thought they were meeting an underage boy or girl for sex.

“When they showed up at our undercover house seeking to meet their intended victims for sex, they were arrested,” said Grewal. “The defendants are now charged with serious crimes and are either behind bars or subject to very stringent pre-trial monitoring.”

Conte was one of 24 men to show up at the house. He allegedly told the girl he was only 19 and admitted to having sex with other children.

“Conte claimed during his chats that he was a 19-year-old male, believing that he was chatting with a 15-year-old girl. He allegedly said that he had had sex with underage girls, and wanted to meet the girl to ‘get naked.’ He had condoms in his pocket when he was arrested,” Grewal said.

According to ABC 6, Police say, the undercover officers clearly identified themselves as underage girls or boys while chatting with the defendants, and despite that information, the men allegedly engaged in conversations about sex, and made arrangements to meet the “children” for sex.

“Prior to the arrest, I was made aware of the situation,” Howell Police Chief Andrew J. Kudrick Jr. said in a statement. “It sickened me to learn one of my officers, a highly competent supervisor none the less and one that I have worked alongside with for many years on the SWAT team, not only defied my trust, but fellow officers as well. But most importantly, defied the public’s trust and expectations of a police officer. As such, I fully supported the investigation and provided input to ensure his apprehension.”

According to the Howell Police Department, they are now conducting their own investigation into Conte to determine if he may have been carrying out his sick desires while on duty. And, as his record shows, this officer has had decades to do so.

As NJ.com reports, part of that investigation includes pulling cellphone and computer records, GPS activity on his patrol vehicle and Department of Motor Vehicle access, according to Kurdrick.

Hopefully there are not a slew of victims in his wake, but if there are, they are encouraged to come forward.

As is standard protocol for police departments whose officers get ensnared in sickening criminal cases, the chief assured the community that Kudrick was the only bad cop on the force.

“I offer my sincere apology to the community that we value and respect so deeply,” Kudrick said. “Our department’s reputation has been tarnished. I ask you not to judge us on the actions of one but rather on the outstanding service the remaining loyal officers provide with professionalism and pride every single day.”

However, Conte wasn’t the only government employee caught up in this sting. There were multiple predators collecting taxpayer money while trying to have sex with children.

Others arrested worked as security guards and nurses.