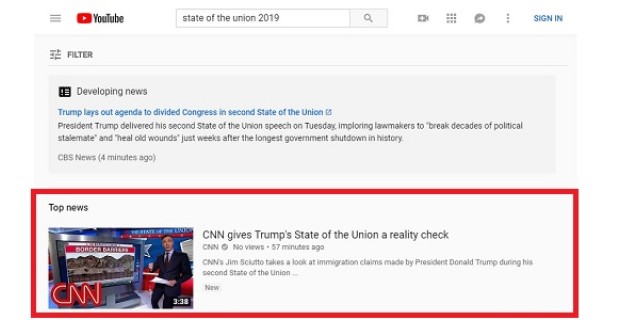 Following President Trump’s State of the Union address, the top search result on YouTube was a CNN ‘fact check’ that had no views, proving once again how Google is manipulating its algorithm for partisan ends.

The top result when a user searched for “state of the union 2019” shortly after the speech ended was a CNN “reality check” that was listed as having “no views”.

As Chris Menahan documents, other results are also completely bias against Trump, despite garnering few views;

The “info box” at the very top features an off-site link to CBS News.

The second result, over Trump’s speech, is Stacey Abrams’ response from CNN’s channel.

The third response is Trump’s speech from — who else — CNN!

According to an official statement, “Google has never manipulated or modified the search results or content in any of its products to promote a particular political ideology.”

However, as we documented last week, YouTube broke its own search engine to ensure that corporate media videos rank higher than those made by independent creators, even when exact search terms are used and the independent videos have millions more views.

The Silicon Valley giant also deliberately changed rankings of search results relating to abortion after a Slate writer complained. Within hours, the results were changed to reflect a dominant pro-abortion position.

Not content with silencing independent voices by burying videos in its algorithm, YouTube is also now considering eliminating the ‘thumbs down’ option altogether after its own ‘YouTube Rewind’ video became the most unpopular video on the platform ever.