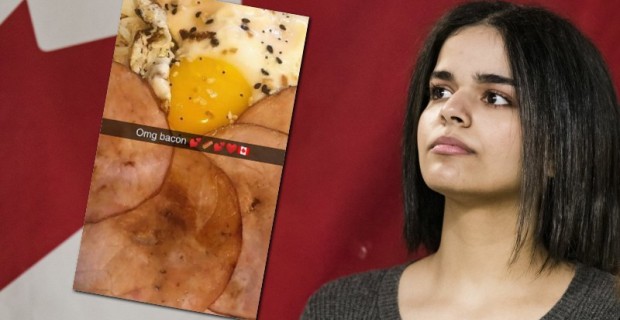 18-year-old Saudi refugee Rahaf Mohammed, who was given asylum after fleeing her country and the religion of Islam, continues to receive death threats after she posted a picture on Snapchat of her bacon breakfast.

Seeking to communicate the benefits of her new “free” life in Canada, Mohammed posted a photograph of bacon and eggs alongside the caption “Omg bacon”. She also posted an image of herself enjoying a Starbucks in which the girls’ bare legs were also visible.

Muslims are prohibited from consuming pork because of a verse in the Koran which states, “He has only forbidden you what dies of itself, and blood, and flesh of swine.”

By becoming a vocal adversary to Islam, Mohammed has received multiple Internet death threats according to Mario Calla, head of the immigration services company tasked with helping Mohammed by the Canadian government.

She also has to be accompanied by a security guard 24/7 in Toronto ensuring that “she is never alone” (because Islam is a religion of peace).

“She sees these threats. She has left Islam and she basically has broken away from her family, and that scares her,” said Calla.

Mohammed left Saudi Arabia after renouncing Islam, which is punishable by death in the Gulf Kingdom.

After arriving in Bangkok, she was originally set to be returned to Kuwait, where her family, who she claims had threatened to kill her, were waiting.

However, after a live tweeting campaign that captured global attention, she was declared a legitimate refugee by the UN and finally given asylum by Canada.

Mohammed now plans to become an activist drawing attention to the plight of women living under Islam around the world.

“Today and for years to come, I will work in support of freedom for women around the world,” she said.