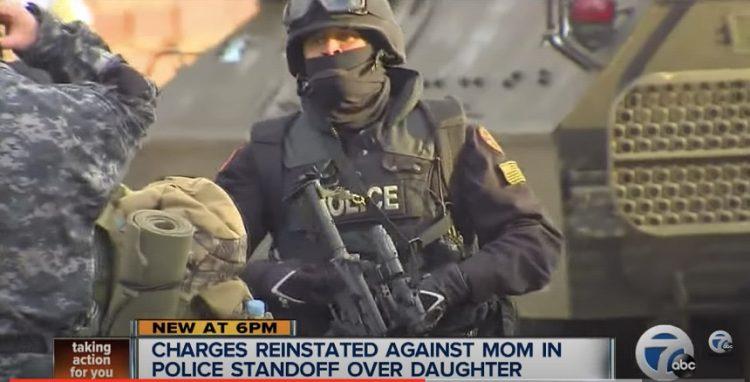 Totalitarianism: a system of government that is centralized and dictatorial and requires complete subservience to the state.

I have a question for you concerning the state’s authority when it comes to America’s children: Where does the state have children (Proverbs 22:6)?

Where has the state magically derived delegated authority from the people that they are to serve by force in medicating or vaccinating you or your children (Exodus 18:25)?

“That to secure these rights, Governments are instituted among Men, deriving their just powers from the consent of the governed…” –Declaration of independence

Americans receive their rights from God, and in turn delegate authority to their representatives. They work for “We the People,” We the People do not work for them!

Where is it in their sworn oaths does it give representatives (Regardless of office) authority to tear down the US Constitution and recreate it in their own image (Deuteronomy 23:23)?

Since when was it the job of the police to enforce such orders as to use assault weapons and a tank to force a mother to give up her child to that of Child Protective services? You say that you cannot find that in your founding documents, me neither.

Therefore we must come to the conclusion that this is foreign to the laws found within the US Constitution (Bill of Rights).

According to the Detroit News, a 56-year-old woman faces multiple felony charges and is being held on $500,000 bond after a 10-hour standoff with police, claiming she was protecting her 13-year-old daughter from unnecessary medication. The story which led to this incident, as reported in the Detroit News and The Voice of Detroit, is quite disturbing.

Maryanne Godboldo’s daughter was born with a defective foot that required amputation of her leg below the knee, which led to Maryanne becoming a stay-at-home mother after her birth. Maryanne and her sister Penny now run a dance school in Detroit. Penny Godboldo reported in the Detroit News her niece’s confidence grew, and despite her handicap, she swam, sang, danced and played the piano. However, as she approached middle school age, she apparently wanted to start attending school, and therefore had to “catch up” on required immunizations.

As the Detroit News reports:

“We believe she had an adverse reaction to her immunizations,” Penny Godboldo said. “She began acting out of character, being irritated, having facial grimaces that have been associated with immunizations.”

Evans said Maryanne Godboldo sought help for her daughter from The Children’s Center, an organization that helps families with at-risk children, where a medical and mental health treatment plan was developed. Godboldo told relatives the medications ordered by the doctor worsened symptoms, including behavioral problems.

“It is an undiagnosed condition, but the doctor had given her psychotropic drugs that caused a bad reaction, made things worse,” said the girl’s father, Mubuarak Hakim. “Maryanne’s decision to wean her from that was making a difference, making her better, helping her to be a happy kid again.”

Child Protective Services workers apparently disagreed, however, and obtained a warrant to remove the girl because the mother had withheld her medication. Maryanne reportedly refused to surrender the child, and an ensuing 10-hour standoff with police followed, after Maryanne allegedly discharged a firearm inside her apartment. Maryanne’s attorney, Allison Folmar, claims her client never shot at police in a report in the Voice of Detroit, which reports that the police sent the “Detroit Special Response Team (SRT) officers who descended on the home with a tank and assault weapons. Video footage shows individual officers staking out the house, taking cover behind trees with their weapons, as in a military operation.”

The Voice of Detroit also reported the story of Starletta Banks, who filed suit in federal court in 2005 after Child Protection Services snatched her three small children, Darius, Danielle and Darren from her arms in 2000, claiming falsely that X-rays of Danielle showed evidence of old fractures:

“The illegal stealing of our children nationwide is a very serious problem that is happening every day and in every state,” Banks told VOD. “Those involved such as judges, prosecutors, social workers, attorneys, physicians, child placement agencies etc. should be exposed, prosecuted and sent to prison. The sole reasons that children are being stolen from their families and homes are the financial incentives associated with each child and circumstance. There is federal grant money given to states and child placement agencies to create situations that do not exist to generate these funds. The state of Michigan is financially broke, thus surviving on the backs of our children.

It is long overdue for the American people to rein in this tyranny, and tyranny it is. These children are ours, not the state’s.