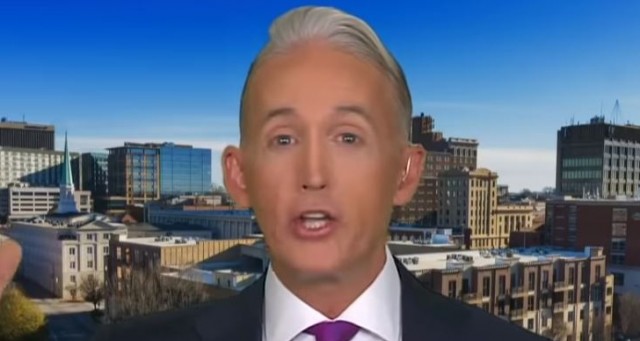 We have some good news and some bad news to report this morning.

FOX News has confirmed that Gowdy has been terminated as a contributor on the network.

Anchor Melissa Francis announced the president’s appointment and mentioned to viewers that Gowdy “was” a Fox News contributor.

Gowdy was hired earlier this year as a contributor after retiring from Congress ahead of the 2018 election to continue his career as an attorney, Ellie Bufkin at Washington Examiner reports.

He has also become a regular FOX News contributor and has spoken consistently against the Democrats’ efforts to impeach Trump. He has sharply criticized House Intelligence Committee Chairman Adam Schiff for his false characterization of the phone call between Trump and Zelensky and his possible knowledge of the whistleblower before the complaint was made official.

And Matt Naham at Law & Crime reports that just days ago, Gowdy pointed out on Fox News that the Washington Post fact checker gave Schiff four Pinocchios for the “false claim his committee had not spoken to the whistleblower.”

“I think he got four only because you can’t get five,” Gowdy quipped. “I mean, he got the maximum sentence you could get from the Washington Post fact checker and don’t you know how hard that was for the Washington Post to give Adam Schiff four Pinocchios?”

The feud between President Trump and Schiff is well-documented and ongoing.

After the White House released a memo of the Trump-Volodymyr Zelensky July 25 phone call, Schiff “ma[d]e up dialogue for dramatic effect,” as ABC News’s George Stephanopoulos put it. The president was not pleased with Schiff’s “parody” and falsely accused the Democratic representative of committing a treasonous act.

“The same guy that had the parody a week or so ago, the same guy that says he has evidence that even [former Special Counsel Robert] Mueller couldn’t find,” Gowdy said. “The question I had is, How long is Speaker Pelosi going to put up with Adam mishandling this investigation?”

All of this is to say that Gowdy, who has a track record of criticizing a primary enemy of the president on the president’s preferred cable news network, makes perfect sense as an outside counsel addition.

And that’s the good news- the ‘BULLDOG’ has joined the Trump Team to combat this corrupt impeachment farce.

Confirmed, per a senior White House official, who says Trump has blessed the move. Trey Gowdy is on the Trump team. https://t.co/yjhaK8LsOF

CNN is reporting something similar, namely that Gowdy on Tuesday met with Mick Mulvaney, Trump’s acting chief of staff, and “accepted an offer to serve as outside counsel to President Trump.”

After meeting with Mick Mulvaney at the White House today, former South Carolina congressman Trey Gowdy has accepted an offer to serve as outside counsel to President Trump, sources tell @PamelaBrownCNN and me.

Gowdy is expected to advise the White House behind the scenes and appear on TV to advocate on behalf of the president.