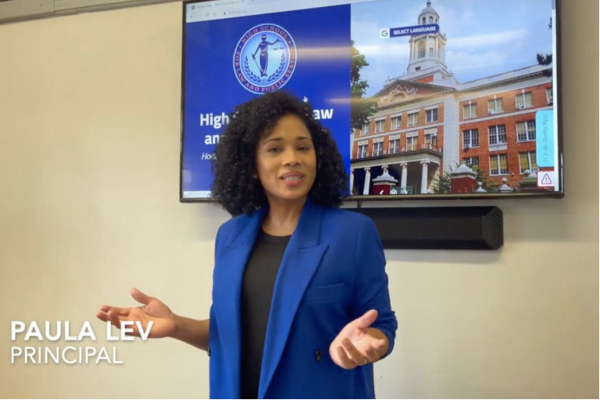 We are at the point in American history when overt anti-whiteness is becoming official position for those newly arrived non-white immigrants seeking to engage in the plundering of what’s left of White America by furthering the disenfranchisement of the nation white people long ago established on this continent. [Principal accused of wanting to oust white teachers created school of ‘insanity’: petition, NY Post, July 2, 2022]:

A Washington Heights principal, accused by staffers of trying to divide the school by race, made good on a vow to ax white staffers and has let the school descend into “insanity,” insiders said.

Paula Lev, the principal of High School for Law and Public Service, faced a Department of Education probe last year after allegedly telling a teacher she was “going to get rid of all these white teachers that aren’t doing anything for the kids of our community,” according to a complaint.

The complaint, first filed with the DOE, is before the state Division of Human Rights.

Lev, who is Dominican, gave excess notices to four white staffers at the 450-student school in the last year, and made other unpopular changes, insiders said.

Some of the excessed teachers found new jobs, so they weren’t officially considered cut; others left on their own; and at least three more teachers decided to call it quits this month, an insider said.

“There are many more teachers who have voiced that they plan to leave and they feel demoralized,” the staffer said. The exodus comes after teachers took an unusual vote of no confidence against Lev a year ago.

One student, Angel Dilawar, 17, who will be a senior in September and is the class valedictorian, started a petition on change.org saying “we have had enough and cannot bear to witness the utter disorganization and insanity at our school.”

“We have some new teachers that are super under-qualified, and staff members that were fully experienced and qualified were excessed,” reads the petition that garnered more than 370 signatures in two months.

Dilawar told The Post that Lev has wasted money on frills like hallway TV monitors and $50,000 worth of hoodies to go with school uniforms that no one wears. Meanwhile, violence has increased, she said.

“Right now students can do anything they want and they’re not going to get in trouble,” Dilawar said.

Dilawar said while helping out in the school’s college office she was asked to write recommendation letters for her peers because the assistant who was supposed to do the work had a limited grasp of English.

“These students would be shocked to find out that their recommendation letters would be written by a student, a junior,” she said.

Dilawar said she had emailed Schools Chancellor David Banks numerous times and had not received a response.

Anti-whiteness is the currency driving a no-longer under the radar economy in our nation, but one increasingly embraced by publicly traded corporations wedded to the idea of Diversity, Inclusion and Equity (ESG is another word for anti-white).

It’s a system deserving bankruptcy, but this requires White Americans remembering what their ancestors declaring “for our posterity” meant.