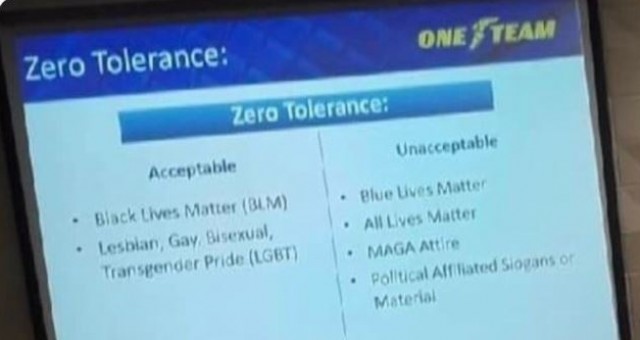 A leaked slide from a Goodyear diversity training session shows the company has decided what the “acceptable” and “unacceptable” slogans are for employees to support, Breitbart reports.

The slide is part of the Goodyear Tire and Rubber Company’s zero-tolerance policy, which has deemed “Blue Lives Matter,” “All Lives Matter,” “MAGA Attire,” and “Politically Affiliated Slogans or Material” as “unacceptable.”

According to @goodyear tires, a MAGA shirt is a zero tolerance hate symbol. But Black Lives Matter is allowed. pic.twitter.com/1kWRqSDFQa

According to the employee who took the photo of the slide, it was presented at the Topeka plant by an area manager and says the slide came from their corporate office out of Akron, Ohio. WIBW Local 13 News

“If someone wants to wear a BLM shirt in here, then cool. I’m not going to get offended about it. But at the same time, if someone’s not going to be able to wear something that is politically based, even in the farthest stretch of the imagination, that’s discriminatory,” said the employee under the agreement of anonymity due to fears they could lose their job. “If we’re talking about equality, then it needs to be equality. If not, it’s discrimination.”

President Trump responded on Twitter- “Don’t buy GOODYEAR TIRES – They announced a BAN ON MAGA HATS. Get better tires for far less! (This is what the Radical Left Democrats do. Two can play the same game, and we have to start playing it now!).”

Exactly how is this equal rights for all employees? You can support Black Lives Matter, Antifa and the burning of our nation but you cannot be an American Patriot that supports our National Anthem, our Flag and the beauty of our nation and those who protect it?

Breitbart reported that, the statement from Goodyear spokeswoman Melissa Monaco was provided to WIBW.

“Goodyear is committed to fostering an inclusive and respectful workplace where all of our associates can do their best in a spirit of teamwork,” Monaco said.

“As part of this commitment, we do allow our associates to express their support on racial injustice and other equity issues but ask that they refrain from workplace expressions, verbal or otherwise, in support of political campaigning for any candidate or political party as well as other similar forms of advocacy that fall outside the scope of equity issues,” she added.

Yesterday, Goodyear became the focus of a conversation that created some misconceptions about our policies and our company. Goodyear has always wholeheartedly supported both equality and law enforcement and will continue to do so. pic.twitter.com/oO6jUg2rTR

Pathetic and if the roles were reversed, I am sure Black Lives Matter thugs would be protesting in Topeka and causing looting and riots and running off with Goodyear tires.