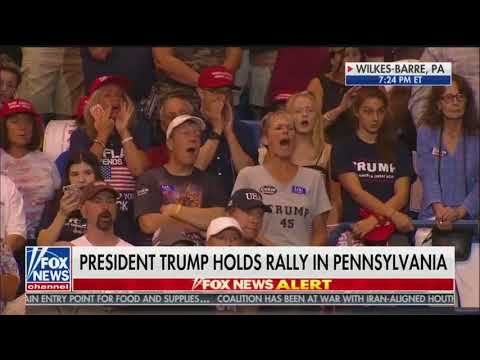 On August 3rd I reported that President Trump hinted to a crowd of Pennsylvania supporters that Hillary Clinton may still be prosecuted.

Thursday Night President Trump placated a raucous Wilkes-Barre, PA crowd that chanted, “Lock her up!” The chants, of course, were a familiar rallying cry to imprison Hillary Clinton.

The President responded by saying, “Some things just take a little bit longer.”

Reacting to the firing of Peter Strzok, Trump tweeted:

Will it be properly redone?

Trump seems determined to fulfill promises he made during the second 2016 presidential debate in St. Louis.

For those who need a refresher, here are two videos to remind you of the commitment President Trump made to investigate and potentially indict & imprison Hillary Clinton.

Many Americans have lost confidence after seeing the phony “investigations” and the “special prosecutors” that were appointed in the past.

The system is corrupted and broken.

Still, Americans long for justice and there is very little doubt in the minds of most Americans that Hillary Clinton is a criminal that should be brought to justice.

Let’s see if the corrupt swamp creatures will at least pretend to go along with the president’s wishes and reopen the investigation.

We should not hold our breath.

However, the fact that our president is keeping the issue alive gives many Americans reason for hope that justice shall still prevail.