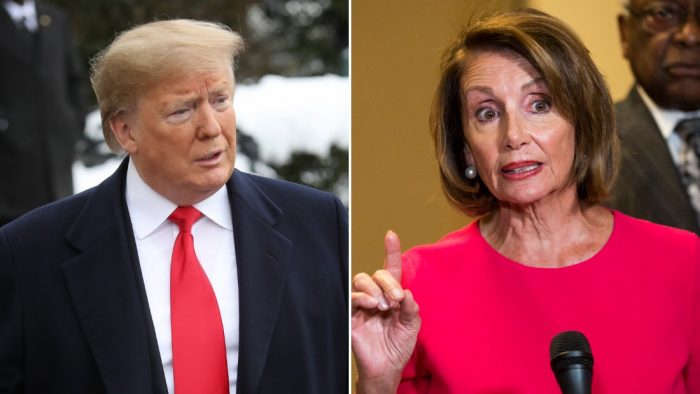 President Trump called on fellow Republicans to oppose a resolution meant to place restrictions on his ability to take military action without congressional approval, as the House prepares to vote on the measure late Thursday, Fox News reports.

House Speaker Nancy Pelosi announced the planned vote in a one-page statement that said last week’s U.S. drone strike that killed Iranian Gen. Qassem Soleimani was “provocative and disproportionate,” despite Trump administration claims to the contrary. Many Democrats were also incensed that the administration did not notify Congress in advance.

Hope that all House Republicans will vote against Crazy Nancy Pelosi’s War Powers Resolution. Also, remember her “speed & rush” in getting the Impeachment Hoax voted on & done. Well, she never sent the Articles to the Senate. Just another Democrat fraud. Presidential Harassment!

Speaker of the House Nancy Pelosi announced that she will still introduce and hold a vote on a resolution to limit President Donald Trump’s power to lead the military in a confrontation with Iran — even though the confrontation is over.

Pelosi and the Democrats planned to pull the resolution, not only because Iran had retaliated, but also because the party could not agree internally on what the bill should contain.

The bill is expected to limit the time a president can lead the military into conflict to 30 days, down from 60 days under the War Powers Resolution of 1973.

“Last week, the Trump Administration conducted a provocative and disproportionate military airstrike targeting high-level Iranian military officials. The Administration took this action without consulting Congress. This action endangered our servicemembers, diplomats and others by risking a serious escalation of tensions with Iran. Since then, the President has made clear that he does not have a coherent strategy to keep the American people safe, achieve de-escalation with Iran and ensure stability in the region.

“Members of Congress have serious, urgent concerns about the Administration’s decision to engage in hostilities against Iran and about its lack of strategy moving forward. Our concerns were not addressed by the President’s insufficient War Powers Act notification and by the Administration’s briefing today.

“Today, to honor our duty to keep the American people safe, the House will move forward with a War Powers Resolution to limit the President’s military actions regarding Iran. This resolution, which will be led by Congresswoman Elissa Slotkin, will go to the Rules Committee this evening and will be brought to the Floor tomorrow.

“The House may also soon consider additional legislation on the Floor to keep America safe. This legislation includes Congresswoman Barbara Lee’s resolution to repeal the 2002 Iraq Authorization for Use of Military Force (AUMF) and Congressman Ro Khanna’s legislation to prohibit funding for military action against Iran not authorized by Congress.

“The Administration must work with the Congress to advance an immediate, effective de-escalatory strategy that prevents further violence. America and the world cannot afford war.