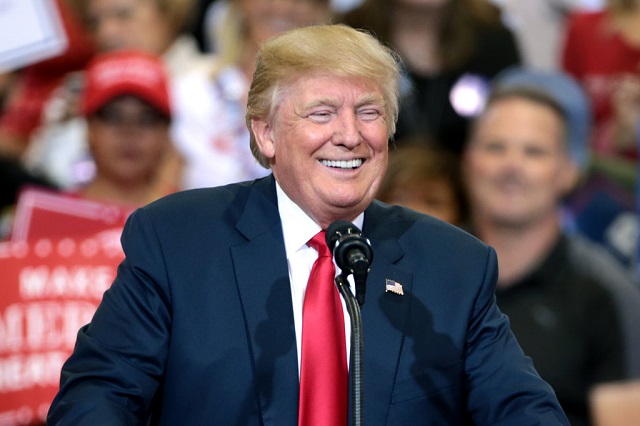 President Trump is going to Make Our Immigration Laws Sane Again one executive order at a time!

President Trump plans to sign an executive order that would remove the right to citizenship for babies of non-citizens and unauthorized immigrants born on U.S. soil, he said yesterday in an exclusive interview for “Axios on HBO,” a new four-part documentary news series debuting on HBO this Sunday at 6:30 p.m. ET/PT.

[…]Trump told “Axios on HBO” that he has run the idea of ending birthright citizenship by his counsel and plans to proceed with the highly controversial move, which certainly will face legal challenges.

“It was always told to me that you needed a constitutional amendment. Guess what? You don’t,” Trump said, declaring he can do it by executive order.

When told that’s very much in dispute, Trump replied: “You can definitely do it with an Act of Congress. But now they’re saying I can do it just with an executive order.”

“We’re the only country in the world where a person comes in and has a baby, and the baby is essentially a citizen of the United States … with all of those benefits,” Trump continued. “It’s ridiculous. It’s ridiculous. And it has to end.”

I’m just as giddy as this reporter! It’s complete insanity and it’s a perfect issue to have the midterms be a referendum on!

Democrats think it’s just fine for an illegal alien to illegal cross the border and go to a US hospital to give birth (paid for by US taxpayers at a cost of anywhere from $32,093 for a vaginal birth to $51,125 for a C-section) then give the anchor baby full citizenship rights and get them straight on the taxpayer dole.

WRONG. "Birthright citizenship" = children of LEGAL immigrants, not yet citizens. "Anchor babies" = children of ILLEGAL aliens — whom no U.S. legal authority has ever ruled are citizens. https://t.co/ZH3DW13I3Y

According to the Congressional Budget Office, there are 4.5 million childrenunder the age of 18 living in the United States who were born to illegal-alien parents. Once these children become adults, they can sponsor their illegal-alien parents for green cards through the immediate family green card category.

Force everyone to vote on it and make it clear where they stand!

Finally, a president willing to take on this absurd policy of birthright citizenship. https://t.co/kCa0ko7P76

The United States is one of two developed countries in the world who grant citizenship based on location of birth.

This policy is a magnet for illegal immigration, out of the mainstream of the developed world, and needs to come to an end.

In addition, I plan to introduce legislation along the same lines as the proposed executive order from President @realDonaldTrump.

We’re not doing anything like Old Linsdey’s “Gang of Eight” immigration reform (cursed be his name), but if New Lindsey (blessed be his name) puts out a clean bill to repeal birthright citizenship that’d be just wonderful!

Retiring House Speaker Paul Ryan — who has absolutely no say in this matter — rushed to the media to denounce Trump in defense of his globalist donors:

.@SpeakerRyan responds to Trump: "Well you obviously cannot do that. You cannot end birthright citizenship with an executive order. We didn’t like it when Obama tried changing immigration laws via executive action, and obviously as conservatives we believe in the Constitution." pic.twitter.com/XMnt7ZzZrF

No one care what you think, bud. Go tell it to the Koch brothers.

This is Trump’s Republican Party now!