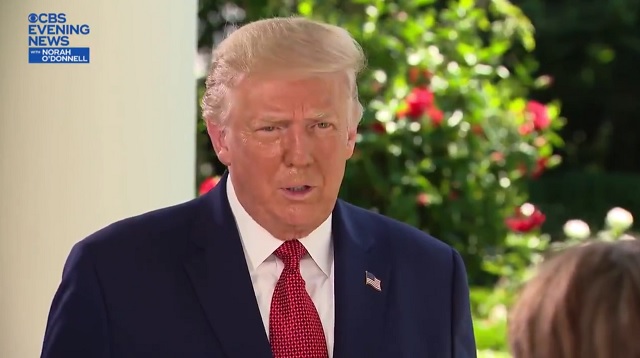 President Donald Trump countered the media’s phony victimization narrative in an interview with CBS News by pointing out that more white people are killed every year by police than black people.

CBS’s Catherine Herridge on Tuesday asked Trump the ridiculous question: “Why are African Americans still dying at the hands of law enforcement in this country?”

President Trump tells @CBS_Herridge that “more White people” are dying at the hands of police than Black people. Watch excerpts on CBSN, more tonight on @CBSEveningNews and tomorrow on @CBSThisMorning https://t.co/NeBLT0LG0p pic.twitter.com/XIwyARJBBl

Around twice as many white people are shot and killed by police every year but studies have found the national media is hyper-focused on covering police shootings where the cop is white and the suspect is black. “Why are African Americans still dying at the hands of law enforcement in this country?” sounds like something a 3-year-old would ask.

You’d think the media would be embarrassed that a senior reporter would ask something so stupid but instead they’re just rolling with it.

Reuters suggested there’s no evidence more whites are killed by police than blacks (be sure to note their capitalization of “Black” and not “white”).

When asked about George Floyd’s death by CBS News, President Trump said it was terrible but stated more white than Black people are killed at the hands of police in the U.S., without giving any evidence of the claim pic.twitter.com/4vB01AfnVW

Studies show Black people are more likely to die during interactions with police than white people.

In one study: although 52% of deaths by police in 17 states from 2009-2012 were white, Black people had a fatality rate 2.8 times higher than white peoplehttps://t.co/TrdRvLqbrz

On the George Floyd front, transcripts released by the attorney of one of the four former Minneapolis police officers charged in Floyd’s death showed he told officers “I can’t breathe” before he was even restrained and told police he was recovering from the coronavirus and wanted to lay on the ground, according to Fox 9.

Floyd’s autopsy showed he had potentially deadly levels of fentanyl in his system (the deadliest drug in America) along with meth and other drugs, so it’s entirely possible he just died from a drug-induced heart attack (the official cause of death was “cardiopulmonary arrest complicating law enforcement subdual, restraint and neck compression”).

The national media couldn’t care less about reporting any of this, all they care about is pushing their phony victimization narratives.