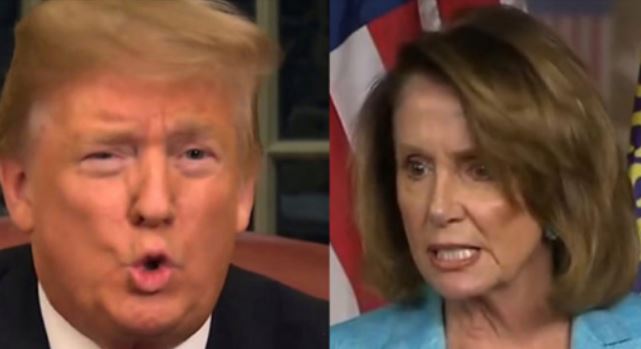 OPINION| I have always wondered just how close to the truth Jessie Ventura was when he told us that politics was much like Pro Wrestling, in that Democrats and Republicans pretend to be at war on TV but are best pals behind the scenes:

That was the old Washington, and while I have a feeling, in fact I’m 99% sure, this is still the way things are among ‘Never Trumpers’ and the others in the Washington establishment, I highly doubt this is how Trump sees things.

One of the things I like best about President Trump is that, what you see is what you get, period. The man is not afraid to tell you where he stands, even if doing so is not popular.

We just saw another splendid example of that this week when Trump let the world know just how much he hates Nancy Pelosi.

President Donald Trump slammed and snubbed Speaker Nancy Pelosi on Sunday with an announcement he won’t attend the annual St. Patrick’s Day lunch in the Capitol this Thursday.

It’s the first time a president has skipped the traditional, non-partisan luncheon since George W. Bush missed it in 2003, shortly before the United States invaded Iraq.

The luncheon – formally called the Friends of Ireland Luncheon – is hosted by the Speaker of the House, who is Pelosi, and honors the taoiseach of Ireland.

Leo Varadkar, the current taoiseach of Ireland, is traveling to attend it, as Irish leaders do every year.

White House Spokesman Judd Deere released a statement on the administration’s decision to skip the event, via Politico.

“Since the Speaker has chosen to tear this Nation apart with her actions and her rhetoric, the President will not participate in moments where she so often chooses to drive discord and disunity, and will instead celebrate the rich history and strong ties between the United States and Ireland at the White House on March 12. The relationship between our two countries has never been stronger, and the President looks forward to welcoming the Prime Minister of Ireland for the annual Shamrock Bowl presentation.”