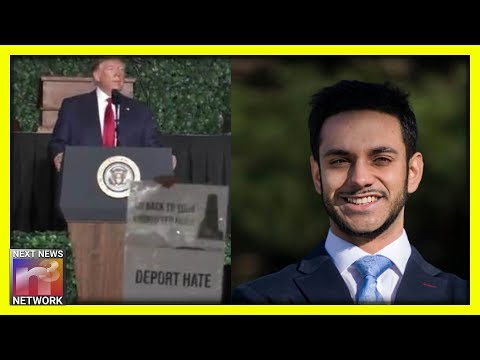 Trump Derangement Syndrome is real and it has apparently effected a member of the Virginia Legislature.

You have to watch this one.

Here’s Gary with the video report from our friends at Next News Network:

I guess Ibraheem was feeling a bit on edge.

President Trump was interrupted by a Democrat member of Virginia’s House of Delegates during a speech Tuesday marking the 400th anniversary of the first meeting of the Virginia legislature in Jamestown in 1619–the first representative legislative assembly in the Western Hemisphere.

Delegate Ibraheem Samirah stood near the front of the stage facing the audience, holding several signs strung together and yelling, “Mr. President, you can’t send us back, Virginia is our home!”, as supporters of the President booed and chanted, “Trump! Trump! Trump!”

The messages on the signs read, “Go Back to Your Corrupted Home”, “Deport Hate” and “Reunite My Family And All Shattered by Systemic Discrimination”.

Samirah’s protest was peaceful and he did not resist or act out when police escorted him out of the venue. Trump did not comment about the protest during the speech. Samirah, elected earlier this year at age 27 in a special election to represent the Northern Virginia town of Herndon, describes himself on Twitter as: “Dentist. Activist-Organizer. Representing the people of the 86th district as the youngest Virginia State Delegate & youngest American Muslim legislator anywhere”

(Note: During the campaign Samirah released a statement apologizing to his Jewish supporters for comments he made on Facebook as a college student.)

"Mr. President, you can't send us back, Virginia is our home!"

Relax Ibraheem, as long as you are here legally then you have nothing to worry about.

Ibraheem is here legally I assume.

I don’t know because weird things happen in Virginia:

Maybe Ibraheem can hide out in the Saudi section of Virginia and learn to relax a little.

I hear they are building a really big mosque there.

But, to be fair, the Muslims in Virginia want nothing but their own piece of the American Dream:

Virginia Imam: “Islam is only solution to solve America’s problems,” US “will be a Muslim nation”

Virginia: Muslims Call For “Force” To Be Used Against “Infidels” To Accept The Koran

Save your tears for Allah, when he fails to deliver your 47 virgins, Ibraheem.

Trump is doing what is right for America and you need to make sure your paperwork is in order and get out of the way.