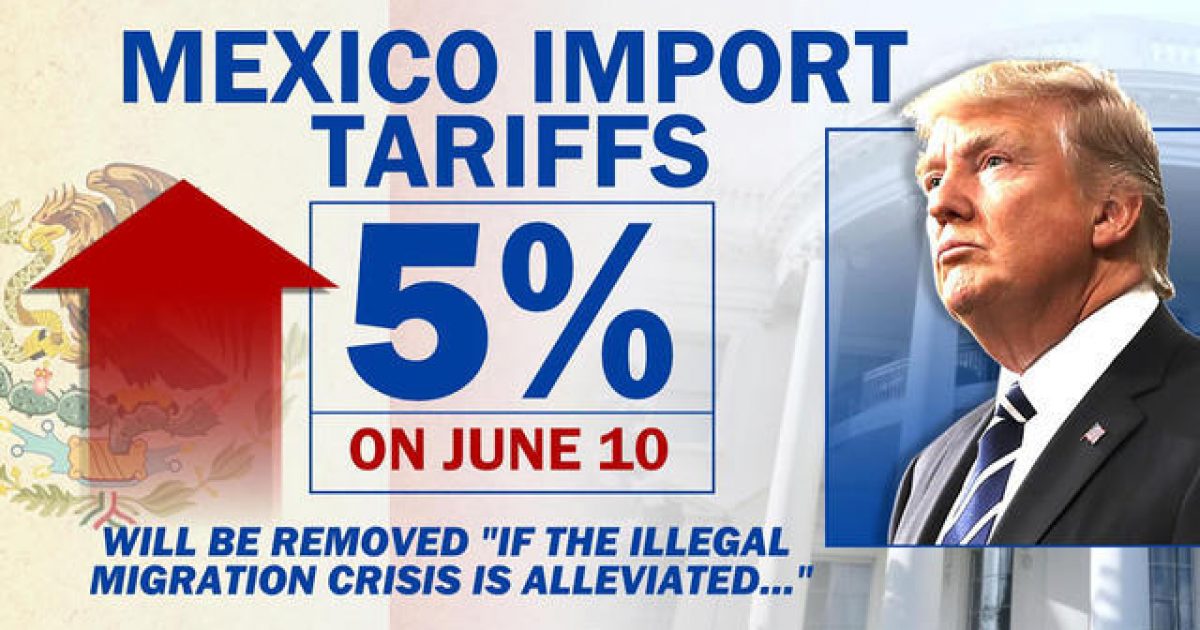 President Trump announced that he will impose 5% tariffs beginning June 10th on good coming from Mexico until such time as illegal immigrants stop coming through Mexico into the US. He promised it will gradually increase until such time as they do stop.

“On June 10th, the United States will impose a 5% Tariff on all goods coming into our Country from Mexico, until such time as illegal migrants coming through Mexico, and into our Country, STOP. The Tariff will gradually increase until the Illegal Immigration problem is remedied at which time the Tariffs will be removed. Details from the White House to follow,” Trump tweeted.

There’s a ton of problems here with this. The first is if one is a strict Constitutionalist, the president was never given such powers to impose tariffs. Congress was given that authority.

Fox News points out where this is coming from.

The International Emergency Economic Powers Act of 1977 permits tariffs to be levied by the executive in the event of a national emergency originating from a foreign source. Trump said he was invoking the powers in the law and would use his “sole discretion” to determine whether Mexico had taken sufficient action.

“We are going to do something very dramatic on the border because people are coming into our country,” Trump told reporters earlier Thursday. “If Mexico does not take decisive measures, it will come at a significant price.”

Well, yes, it will, but not for Mexico. I’ll get to that in a moment.

The law by which Trump can impose sanctions like the tariffs, passed in the wake of Watergate and Vietnam, is the 1977 International Emergency Economic Powers Act. This authority has actually been used quite frequently; there have been 54 national emergencies, 29 of which are ongoing.

Some of these emergencies targeting countries have been going on for decades, like sanctions on Iran. Others, like the one enacted by Bill Clinton targeting narcotics traffickers, have certainly affected people in Mexico, but just as certainly not affected the whole country.

The law has never, before now, been used to impose tariffs, according to CRS. And Mexico is a neighbor and ally, from which we bought $345 billion in stuff last year because we are joined together in the North American Free Trade Agreement.

The issue though is that the Constitution never gave authority to Congress to delegate the authority we gave to them to the executive branch. This has been brought up time and again no matter the political party in the White House on a variety of things such as going to war without Congress declaring it.

Congress has the power to impose tariffs, and it is something understood that would only be used to provide for the constitutional spending of the federal government. The Executive Branch does not have that power constitutionally. No one can cite that power in our Constitution.

In writing against the calls for an Article V convention to amend the Constitution, Publius Huldah wrote concerning tariffs.

Throughout Federalist No. 49, Madison warned against a convention for proposing amendments, and showed that a convention is neither proper nor effective to restrain government when it encroaches.

“Should the provisions of the Constitution as here reviewed be found not to secure the Govt. & rights of the States agst. usurpations & abuses on the part of the U.S…” (p. 398)

So he is talking about provisions – defects – in the Constitution which permit the federal government to abuse the States. He goes on to say:

To fully grasp Madison’s point, we must look at his letter in its historical context of the Tariff Act of 1828: The southern states bought manufactured goods from England. England bought southern cotton. But infant industries in the Northeast couldn’t compete with the English imports. So, during 1828, Congress passed a Tariff Act which imposed such high tariffs on English imports that the southern states could no longer buy them. England stopped buying southern cotton. This devastated the southern economy. So, South Carolina wanted to nullify the Tariff Act (the “Tariff of Abominations”); and developed a theory that a State had a “constitutional right” to nullify any federal law, and the nullification would be presumed valid, unless three-fourths of the States said it wasn’t valid.

Madison opposed South Carolina’s theory because the Tariff Act was constitutional – it was authorized by Art. I, §8, cl. 1, US Constitution. States can’t nullify a constitutional law! 7

But while the Tariff Act was constitutional, it was abusive: Article I, §8, cl. 1 was being used to benefit infant industries in the Northeast at the expense of the southern states. 8

So, what’s the remedy “within the purview of the Constitution” for the Tariff Act of 1828? Madison doesn’t spell it out – but obviously Art. I, §8, cl. 1 could be amended to say that Congress may impose tariffs only to raise revenue to carry out the enumerated powers; and may not impose tariffs in order to benefit domestic industries, or to benefit one section of the Country at the expense of other sections. 9

Now, keep in mind one thing, and you must grasp this. The only people being hurt by this tariff are the American people.

Mexico will pay the tariff and that money will go to Washington, DC and it will be spent unconstitutionally while our debt and deficit spending continues on.

However, Mexico will have to raise the prices of their goods into the US as a result and guess who pays that? You and me.

This is economics 101. Tariffs against Mexico are, in essence, an increase in prices on the American people, unless they simply choose to not buy, in which case, Mexican businesses simply won’t be selling to the US.

I guess it’s a good thing that Congress gave some people those tax breaks, isn’t it?

Mexico isn’t going to stop migrants from coming into the US any more than the US is going to stop them (see the video below). In fact, if you didn’t notice, we aren’t really even trying to stop them, just pulling up buses to take them off, fly them around the country, feed them, clothe them and provide hygiene products and healthcare.

Oh, and that’s on your dime too, America.

Kind of like the wall, it won’t be Mexico paying for it, it will be you… and those migrants aren’t going to stop coming.