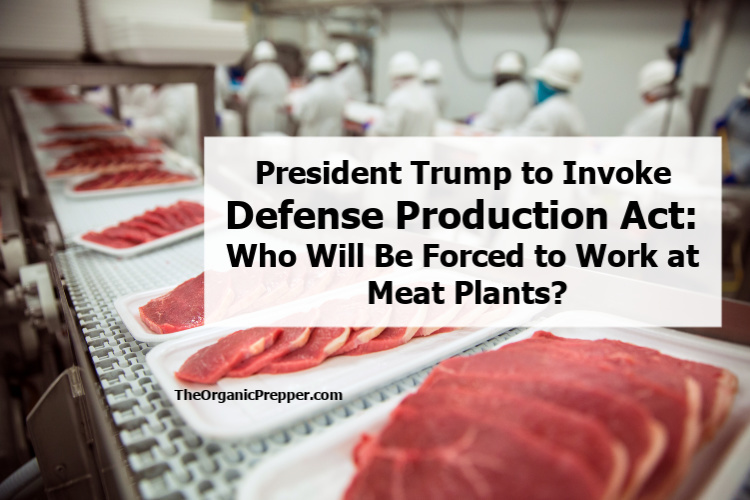 Over the past few weeks, nearly a dozen large meat processing plants have closed their doors due to widespread coronavirus among employees. Thousands of workers have become infected and at the time of publication, at least 20 have died.

At the same time, President Trump is invoking the Defense Production Act.

What is the Defense Production Act?

The act, which was officially passed in the 1950s, give the government power over private industries.

The Act gives the federal government broad authority to direct private companies to meet the needs of the national defense.

Over the decades, the law’s powers have been understood to encompass not only times of war but also domestic emergency preparedness and recovery from terrorist attacks and natural disasters.

The act authorizes the president to require companies to prioritize government contracts and orders seen as necessary for the national defense, with the goal of ensuring that the private sector is producing enough goods needed to meet a war effort or other national emergency.

It also authorizes the president to use loans, direct purchases and other incentives to boost the production of critical goods and essential materials.

Other provisions authorize the federal government to establish voluntary agreements with private industry and to block foreign mergers and acquisitions seen as harmful to national security. (source)

Reports say that President Trump, who refers to himself as a wartime president, is invoking the act over deep concerns about our supply chain.

What does this mean?

According to Bloomberg, the President will order the facilities will remain open due to a quickly evolving breakdown of our food supply chain.

President Donald Trump plans to order meat-processing plants to remain open as the nation confronts growing food-supply disruptions from the coronavirus outbreak, a person familiar with the matter said.

Trump plans to use the Defense Production Act to order the companies to stay open as critical infrastructure, and the government will provide additional protective gear for employees as well as guidance, according to the person. (source)

This is the spirit of how the Act was designed to be used. President Truman signed it into law over concerns about supplies and equipment during the Korean war and it has subsequently been used during disasters like hurricanes and other wars. Presidents Clinton and Bush both used it to supply California utilities during an energy crisis there. It was also used in early April to compel 3M to make N95 respirators. So its use is not unprecedented.

Unions are not pleased about this order.

According to Bloomberg’s report, it sets the stage for a showdown between industry giants and labor unions.

Trump signaled the executive action at the White House on Tuesday, saying he planned to sign an order aimed at Tyson Foods Inc.’s liability, which had become “a road block” for the company. He didn’t elaborate.

The order, though, will not be limited to Tyson, the person said. It will affect many processing plants supplying beef, chicken, eggs and pork…

…The White House decided to make the move amid estimates that as much as 80% of U.S. meat production capacity could shut down. (source)

Union representatives are concerned about the lack “meaningful safety requirements” for workers who will be compelled to return to plants that have been shut down due to the spread of COVID-19.

“We only wish that this administration cared as much about the lives of working people as it does about meat, pork and poultry products,” said Stuart Appelbaum, President of the Retail, Wholesale and Department Store Union. (source)

The White House source said that safety measures were being considered.

The White House has been discussing the order with meatpacking executives to determine what they need to operate safely and stay open, in order to prevent shortages, the person said.

Who will be manning the factories?

So, the question is, will workers return voluntarily to a job that Union representatives tell them is unsafe? Will these workers be mandated to return under the Defense Production Act even though many have become ill working during the pandemic?

The United Food and Commercial Workers International Union, which represents 1.3 million food and retail workers, said Tuesday that 20 U.S. food-processing and meatpacking union workers in the U.S. have died and that an estimated 6,500 are sick or have been exposed to the virus while working near someone who tested positive.

COVID-19, the disease caused by the virus, has infected hundreds of workers at meat-processing plants and forced some of the largest to close and others to slow production. While the output at beef and poultry plants has diminished, pork plants in the Midwest have been hit especially hard. The viral outbreaks have persisted despite efforts by the meat companies to keep workers at home with pay if they become sick. (source)

Obviously, people have to be present to keep the plants running. What happens if current employees and union members refuse to return to the plants? Will people who have been cleared as immune by the much-touted but elusive antibody tests be pressed to work there?

It’s clear we’re currently living through a time during which unusual things are happening and our constitutional rights no longer seem as solid as they once did. So, if the plants are mandated to be open, this leaves some pretty big questions.

Will people return to work voluntarily? Or will we see civilians facing forced labor right here on American soil?