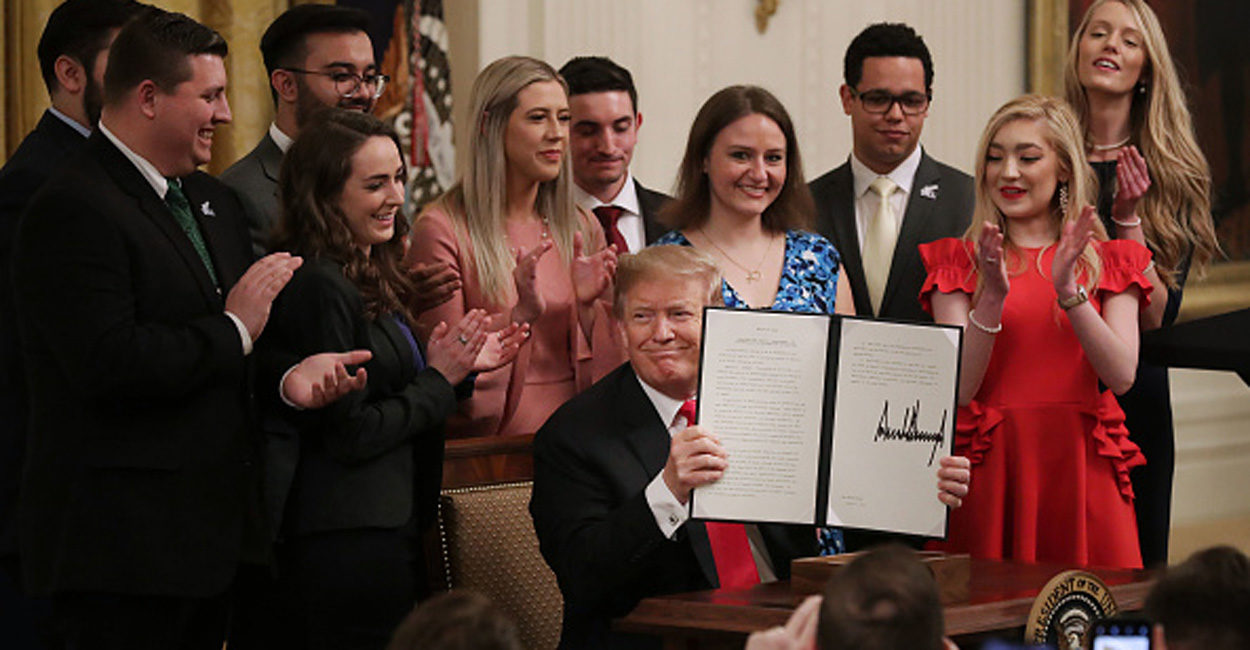 Polly Olson, a student at Northeast Wisconsin Technical College, last year handed out homemade Valentine cards on her campus with Christian messages until college officials told her she was restricted to a “free speech zone.”

On Thursday, Olson told her story at the White House before President Donald Trump signed an executive order aimed at protecting free speech on college campuses.

“My mother told me when she was homeschooling me that I would need to know what my First Amendment rights were, because someday they would be violated, and I would have to stand up for them,” Olson said, speaking at the East Room event. “I was told I was soliciting and disrupting the learning environment, and that it would not be tolerated, and that I would have to stop handing out valentines.”

Trump’s executive order, “Improving Free Inquiry, Transparency, and Accountability at Colleges and Universities,” directs federal agencies, including the departments of Education, Health and Human Services, and Defense, to withhold money from colleges that censor student speech.

The executive order would affect at least $35.8 billion in research grant money doled out to universities and colleges each year, a senior administration official said. It would not affect federal student aid programs.

“I’m just one of many students out there that universities and schools are trying to shut down, sweep it under the rug, and make them be quiet,” Olson said. “I’m not going to be quiet this time. I’m going to talk to anyone and everyone I can about our freedom of speech in this country. Without the freedom of speech, you don’t have America anymore.”

She later added, “Speak your differences. It’s OK … . Embrace the diversity that we have here. That’s what made America great.”

“Under the policy I announced today, federal agencies will use their authority under various grant-making programs to ensure that public universities protect, cherish the First Amendment, the First Amendment rights of their students, or risk losing billions and billions of dollars in federal taxpayer dollars,” Trump said to applause.

“Under the guise of speech codes, safe spaces, trigger warnings, these universities tried to restrict free thought, impose total conformity, and shut down the voices of great young Americans, those here today,” Trump said. “Taxpayer dollars should not subsidize anti-First Amendment institutions, and that’s exactly what they are, anti-First Amendment.

Kaitlyn Mullen, a student at the University of Nebraska at Lincoln, who was active in the conservative youth group Turning Point USA, and Ellen Wittman, a student at Miami University in Oxford, Ohio, who led her campus Students for Life chapter, also spoke about how college administrators sought to suppress student speech.

Pro-life students may face the most First Amendment violations from schools, said Kristen Hawkins, president of the Students for Life of America.

“Colleges and administrators always leaned left, and campuses were always hotbeds of liberalism,” Hawkins told The Daily Signal. “What’s changed today is the notion that some opinions are ‘dangerous.’ Words some people don’t like are called ‘harmful.’”

Trump’s order also requires the Department of Education to expand data available to student consumers for each college about earnings a student can expect from a degree program, debt, and student loan default and repayment rates.

The senior administration official told reporters the order applies rules to research and other grants that already apply to Department of Education grants.

Universities and colleges will have to agree to the new free speech rule before they will be eligible for federal grants.

Some academics dispute that there’s a problem at all. The American Association of University Professors issued a joint statement with other faculty and research groups opposing the executive order.

“President Trump’s pledge to issue an executive order that would deny federal research funds to colleges and universities that do not ‘support free speech’ is a dangerous solution to a largely nonexistent problem,” the professors association statement said.

“American colleges and universities are far from perfect, but with few exceptions they welcome a greater diversity of viewpoints and opinions than just about any other institution in society. Even if the current political environment poses significant problems for free speech, the view that the free exchange of ideas no longer occurs on campuses is grossly exaggerated,” it said.

“There is always fear of federal overreach,” Butcher told The Daily Signal. “This order just says that agencies that award grants should consider free speech. So, it takes free speech seriously, but it stays within existing law.”