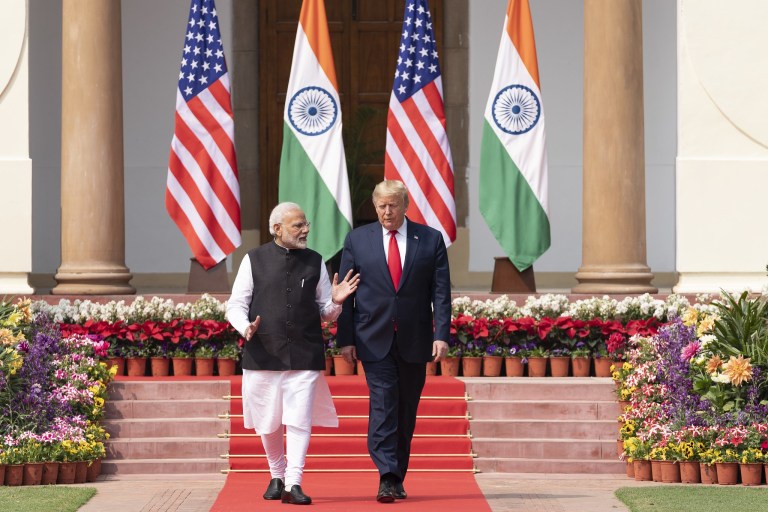 (TNS) Democrats and the ‘mainstream media’ are perpetually triggered by anything President Donald Trump does, but they are particularly miffed at his so-called ‘war on White House staffers’ as his purge of ‘disloyal’ careerists continues apace.

As reported by The Washington Times, Trump defended the purges while in India during a trade and security visit with the world’s largest democracy.

Speaking at presser, the president acknowledged that Director of Presidential Personnel Johnny McEntee is looking at various agencies for people who “oppose” Trump, the paper reported.

“I don’t think it’s very many people,” the president said. “We want to have people that are good for the country, that are loyal to our country. Because that was a disgraceful situation.”

The effort was begun after Mr. Trump’s impeachment, and the president on Tuesday mentioned Lt. Col. Alexander Vindman, a former National Security Council aide who testified against him in the impeachment inquiry.

“I think we had a whistleblower who was a fake,” the president added. “Then there was supposed to be a second whistleblower.”

He, of course, is referencing Army Lt. Col. Alexander Vindman, most likely. The former National Security Counsel member and Ukraine specialist had a leading role, essentially, in the president’s impeachment — and worse, the entire narrative was a fabrication, just like “Russian collusion.”

But of course, the Democrat Left and their media propagandists are making the president out to be some maniacal tyrant who is ‘targeting political opponents’ because he’s ‘trying to operate in secret’ and ‘be a king,’ or something like that.

In fact, the president has a right to his own staff. Through his election, he has earned the right to govern without being undermined constantly by sniping low-level staffers working for partisans in Congress and their own deep state interests.

Trump, like presidents before him, has earned the right to be obeyed. Elections are how Americans decide whether or not they approve of the policies enacted by the president; the permanent bureaucracy isn’t in place to serve itself, but the American people through adherence to the president’s wishes.

“Our President deserves, and has the right to run his administration with people that serve at the pleasure of the president,” Fox News contributor and investigative journalist Sara A. Carter said this week.

.@SaraCarterDC reacts to reports that President Trump is 'cleaning house' at the NSC: "Our president deserves, and has the right to run his administration with people that serve at the pleasure of the president…"#NextRevFNC pic.twitter.com/rsZAo8GWcc

And frankly, it was past time for the president to conduct this major housekeeping operation. He’s been undermined and countermanded since he took office. He’s been put through the rarest of things — impeachment — and for doing nothing improper and that hasn’t been done by his political nemeses.

Hopefully, the president will finally get the team he has long earned and deserved in time for his second term.