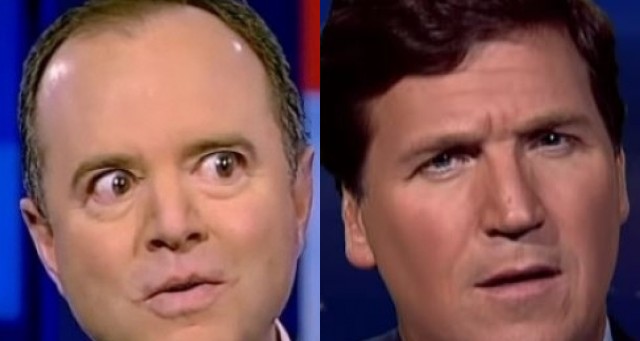 House Intelligence Committee Chairman Adam Schiff has been running secret squirrel impeachment inquiries for weeks now, bring in a conga line of President Trump haters who are stretching credulity, process and, perhaps even the truth, as they play their role in the ongoing coup attempt.

One of Schiff’s “star witnesses” thus far has been Marie Yovanovich, the former ambassador to Ukraine whom Trump fired because a) she was an Obama sycophant who was undermining his foreign policy; and b) he can.

On his Thursday night program, Tucker Carlson introduced evidence suggesting that Yovanovich may have perjured herself under oath during an appearance before the Schiff Secret Squirrel Impeachment Panel.

According to The New York Times:

The former United States ambassador to Ukraine told impeachment investigators last month that she felt “threatened” by President Trump after it emerged that he told the Ukrainian president she would “go through some things,” adding that she still feared retaliation.

That was just one detail that emerged Monday as the House released hundreds of pages of testimony from Marie L. Yovanovitch, who was abruptly recalled in May and remains a State Department employee, and Michael McKinley, a top diplomat who advised Secretary of State Mike Pompeo and has since retired.

However, as Carlson noted, there are irregularities between her statement and testimony vs. other documentation.

A private email sent August 14 to Yovanovich (who was fired by Trump in May) from a Democratic staffer to the House Foreign Affairs Committee that Carlson obtained said, “I’m writing to see if you would have time to meet up for a chat — in particular, I’m hoping to discuss some Ukraine-related oversight questions we are exploring.

“I’d appreciate the opportunity to ground-truth a few pieces of information with you, some of which are quite delicate/time-sensitive and thus, we want to make sure we get them right,” the email continued.

That email was sent just two days after the Ukraine whistleblower complaint was filed a month before it become public, Carlson noted, adding that the whistleblower went to Schiff’s team before filing it.

So the question becomes: Did Schiff’s office tell other Democrats what was actually in the whistleblower complaint? And…how long did all of this play out in secret before the country was made aware of the complaint?

Carlson said his team reached out to the House Foreign Affairs Committee and got this response:

The Committee wanted to hear from an ambassador whose assignment was cut short under unusual circumstances. The staff outreach was part of a months-long effort that culminated in the Sept. 9 launch of an investigation into these events.

During her testimony, U.S. Rep. Lee Zeldin (R-N.Y.) asked Yovanovich specifically about the email. She claimed that she never responded to it.

That was a blatant lie.

But, in fact, she did respond. Indeed, she said she “looked forward to chatting with” the Democratic staffer.

“Tucker Carlson reports that it appears as though Obama’s Ambassador to Ukraine, Marie Yovanovitch, perjured herself under oath, according to new email evidence.”

Tucker Carlson reports that it appears as though Obama's Ambassador to Ukraine, Marie Yovanovitch, perjured herself under oath, according to new email evidence pic.twitter.com/EBTh6GgXOZ

Yovanovich’s testimony was given under oath. Perjury is a crime; lying to Congress is what Roger Stone has been charged with.