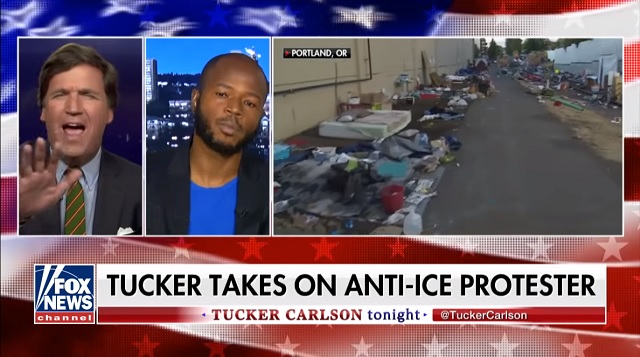 Fox News host Tucker Carlson invited Occupy ICE protester Cameron Whitten on his show Tuesday night to ask him one simple question: why can’t you all pick up your own trash?

As I reported last Wednesday in an article which was picked up by Infowars and Drudge, Occupy ICE protesters in Portland left heaps of garbage and “human waste piling up inside” their encampment for the city to clean at taxpayers expense.

“You mobilized, you’ve got a mass movement, and have engaged people that want to make America better,” Carlson said to Whitten. “But you leave beer bottles and hypodermic needles behind. Is that really the kind of change that most people want? I don’t think so.”

“I call this deflection,” Whitten responded.

“Can we talk about what’s important right now–,” Whitten responded.

“What’s important is not living in a trash heap!” Carlson fired back.

“I’m an American. I was born here, I have a family,” Carlson went on to say. “I don’t want to live in a place that looks like Tegucigalpa. I don’t think anyone does including immigrants. I’m just saying, if you are setting a model for the rest of us, why the hell were you living like animals?”